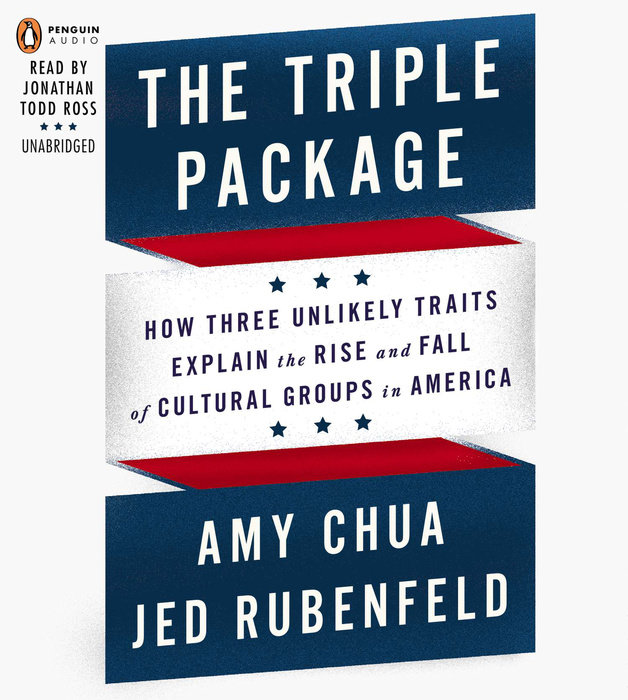 Written by: Amy Chua & Jed Rubenfeld
Read by: Jonathan Todd Ross
7 Hours and 9 Minutes Imprint: Penguin Audio Genre: Social Science - Sociology - Social Theory Release Date: February 04, 2014
"That certain groups do much better in America than others—as measured by income, occupational status, test scores, and so on—is difficult to talk about. In large part this is because the topic feels racially charged. The irony is that the facts actually debunk racial stereotypes. There are black and Hispanic subgroups in the United States far outperforming many white and Asian subgroups. Moreover, there’s a demonstrable arc to group success—in immigrant groups, it typically dissipates by the third generation—puncturing the notion of innate group differences and undermining the whole concept of 'model minorities.'"

Mormons have recently risen to astonishing business success. Cubans in Miami climbed from poverty to prosperity in a generation. Nigerians earn doctorates at stunningly high rates. Indian and Chinese Americans have much higher incomes than other Americans; Jews may have the highest of all.

Why do some groups rise? Drawing on groundbreaking original research and startling statistics, The Triple Package uncovers the secret to their success. A superiority complex, insecurity, impulse control—these are the elements of the Triple Package, the rare and potent cultural constellation that drives disproportionate group success. The Triple Package is open to anyone. America itself was once a Triple Package culture. It’s been losing that edge for a long time now. Even as headlines proclaim the death of upward mobility in America, the truth is that the old-fashioned American Dream is very much alive—but some groups have a cultural edge, which enables them to take advantage of opportunity far more than others.

•   Americans are taught that everyone is equal, that no group is superior to another. But remarkably, all of America’s most successful groups believe (even if they don’t say so aloud) that they’re exceptional, chosen, superior in some way.

•   Americans are taught that self-esteem—feeling good about yourself—is the key to a successful life. But in all of America’s most successful groups, people tend to feel insecure, inadequate, that they have to prove themselves.

•   America today spreads a message of immediate gratification, living for the moment. But all of America’s most successful groups cultivate heightened discipline and impulse control.

But the Triple Package has a dark underside too. Each of its elements carries distinctive pathologies; when taken to an extreme, they can have truly toxic effects. Should people strive for the Triple Package? Should America? Ultimately, the authors conclude that the Triple Package is a ladder that should be climbed and then kicked away, drawing on its power but breaking free from its constraints.

Provocative and profound, The Triple Package will transform the way we think about success and achievement.

Read More
Publishers Weekly (starred and boxed):
“In their provocative new book, Chua (Battle Hymn of the Tiger Mother) and Rubenfeld (The Interpretation of Murder)—Yale Law professors and spouses—show why certain groups in the U.S. perform better than others. According to the authors, three traits breed success: a superiority complex, insecurity, and impulse control. Only when this ‘Triple Package’ comes together does it ‘generate drive, grit, and systematic disproportionate group success.’ Supported by statistics and original research….This comprehensive, lucid sociological study balances its findings with a probing look at the downsides of the triple package—the burden of carrying a family’s expectations, and deep insecurities that come at a psychological price.”

Kirkus Reviews:
“Husband and wife professors at Yale Law School explore why some cultural groups in the United States are generally more successful than others. Chua and Rubenfeld argue that each of these groups is endowed with a “triple package” of values that together make for a potent engine driving members to high rates of success….[and] that the U.S. was originally a triple-package nation. However, while Americans still view their country as exceptional, in the last 30 years, the other two parts of the package have gone out the window, replaced by a popular culture that values egalitarianism, self-esteem and instant gratification, creating a vacuum for more motivated groups to fill. On a highly touchy subject, the authors tread carefully, backing their assertions with copious notes. Though coolly and cogently argued, this book is bound to be the spark for many potentially heated discussions.”

National Review Online:
“Thinkers like Chua and Rubenfeld do us a service by reaching beyond the limits of what we can quantify.”

J.D. Vance, National Review Online:
“Their book is a sometimes funny, sometimes academic, and always interesting study of the cultural traits that make some groups outperform others in America. . . . the book asks a very important question: why are some of us doing so much better (or worse) than others? . . . I’m not sure that Chua and Rubenfeld have all the right answers. But I do know that by focusing on people—and the cultures that support and affect them—they’re asking the right questions. That’s more than I can say for most of the social policy experts occupying the airwaves today.”

Logan Beirne, FoxNews.com:
“Filled with surprising statistics and sociological research. . . .From the nation’s start, Washington and the Founders believed that hard work and sacrifice meant success for the future. This was the start of the American dream. ‘Triple Package’ contends that success is driven not by inborn biology, but is instead propelled by qualities that can be cultivated by all Americans. The book serves as an opportunity to discuss what has helped drive America’s triumphs in the past – and how we might harness this knowledge for our future.”

Elle:
“The book meticulously documents that a variety of subgroups—Chinese, Mormons, Jews, Iranians, Indians, and Nigerians, among others—are higher-achieving than the average American; its 182 pages of text come with more than 100 pages of supporting notes. In analyzing how these groups, all of which identify as outsiders in some way, have done so well, the authors suggest that all Americans might profit from emulating these ‘model minorities.’”

David B. Green, Haaretz (Israel):
“Their book is not racist. For one thing, they are drawing a correlation between success and certain psychological attitudes, not congenital characteristics. They also go out of their way to say that the Triple Package, or the material success it can help people attain, is no guarantee of happiness, and they give plenty of examples of the psychological damage it can do. Even more significantly, there’s no doubt that attitudes – and performance – can and do change over time. . . .As a reader, I enjoyed the extensively sourced statistics and anecdotes that provide the basis for Chua and Rubenfeld’s argument, and was not especially troubled by the fact that “The Triple Package” is not an academic book. For me, its main value is found in the final chapter, in which the authors examine where America has gone wrong.”

Business Traveller (UK):
“The titles of these forces explain what they are clearly enough, although the detail is intriguing. As you'd expect, it's the individuals who have emerged from these groups that provide the best stories, however. . . .Interestingly, the authors are nuanced on what constitutes "success" and point out that there is a dark underside to the ‘advantages’ that those in these groups ‘enjoy’. . . .It's hard to argue with the quantative and qualitative data amassed here… By and large, successful people are very ambitious, and don't mind you knowing the fact (they also often invite you to celebrate their success). The authors are very good in their descriptions of this sort of ego. It is also an enjoyable read, and one which really should not be criticised for the wrong reasons. I think many will nod in agreement. . . .a dose of common sense, rather like Amy Chua's previous book, Battle Hymn of the Tiger Mother.”

Kavaree Bamzai, India Today:
“[the book] is implicitly critical of America's instant gratification disorder, and highlights the death of upward mobility among Americans. . . . The Triple Package is both a self-affirming anthem for those who need it as well as an anthropological exercise to understand what is going wrong with post-millenial America.”

Will Pavia, The Times (UK):
“The Triple Package is backed up with reams of research and qualifications. They tiptoe mirthlessly over cultural egg shells yet still manage to stir up controversy."

Katie Roiphe, Financial Times (UK):
“Chua and Rubenfeld’s explosive new meditation on success, The Triple Package, has already begun to enrage people, even those who, by their own admission, haven’t read it but have simply heard about how shocking it is.”

The Independent (UK):
“The book is not racist – it is well-written; seductive.”

Matthew Syed, The Times (UK), Book of the Week:
“One of the most controversial books of recent years ... the authors are to be commended for dealing with a controversial subject, and for revealing some deep truths. It deserves a wide audience.”

Emma Brockes, The Guardian (UK):
“A lot to find interesting ... They draw on eye-opening studies of the influence of stereotypes and expectations on various ethnic and cultural groups ... The authors’ willingness to pursue an intellectual inquiry that others wouldn’t is bracing.”

Jenni Russell, Sunday Times (UK):
“Provocative ... If you care at all about the social pressures underpinning success and failure, or relish fresh perspectives on how societies really work, you will want to read this.”

Allison Pearson, Daily Telegraph (UK):
“The authors have already been accused of racism, mostly by people who haven’t read the book ... Powerful, passionate and very entertaining.” 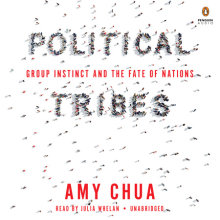 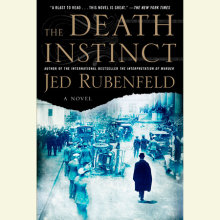 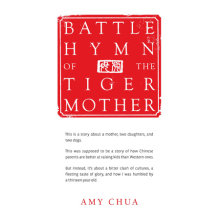 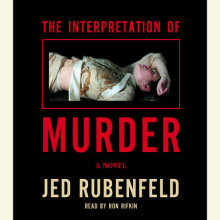