home
x
Subscribe
- Penguin Audio -
Written By: Julie Klam
Read By: Julie Klam
15
Unabridged Download
-9781524776886 -
*Manufacturerâ€™s Suggested Retail Price. See retailer for details.
The Stars in Our Eyes
The Famous, the Infamous, and Why We Care Way Too Much About Them 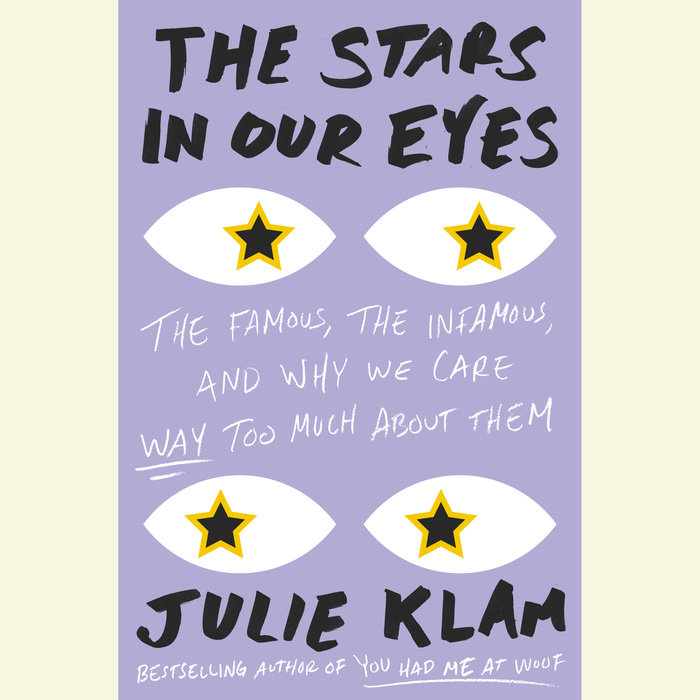 From bestselling author Julie Klam comes a lively and engaging exploration of celebrity: why celebrities fascinate us, what it means to be famous today, and why celebrities are so important.

“When I was young I was convinced celebrities could save me,” Julie Klam admits in The Stars in Our Eyes, her funny and personal exploration of fame and celebrity. As she did for subjects as wide-ranging as dogs, mothers, and friendship, Klam brings her infectious curiosity and crackling wit to the topic of celebrity. As she admits, “I’ve always been enamored with celebrities,” be they movie stars, baseball players, TV actors, and now Internet sensations. “They are the us we want to be.” Celebrities today have a global presence and can be, Klam writes, “some girl on Instagram who does nude yoga and has 3.5 million followers and a Korean rapper who posts his videos that are viewed millions of times.”

In The Stars in Our Eyes, Klam examines this phenomenon. She delves deep into what makes someone a celebrity, explains why we care about celebrities more than ever, and uncovers the bargains they make with the public and the burdens they bear to sustain this status. The result is an engaging, astute, and eye-opening look into celebrity that reveals the truths about fame as it elucidates why it’s such an important part of life today.
Read More
“[Klam’s] sharp humor really shines when she reflects on her awkward youth, especially her childhood in the moneyed enclave of Bedford, N.Y. The Stars in Our Eyes is a fast, fun look at celebrity culture that reads like a bubbly conversation at an Oscars viewing party, where we gossip with glee and then wonder why we know so much about these strangers’ lives.” —Washington Post

“Klam’s journalism skills and unabashed celebrity worship animate this eye-opening exploration of all things celeb. She interviews stars who wear their fame with grace, calls out a few who don’t and describes some hilarious celebrity encounters. It’s Klam’s own self-deprecating wit that is the real star here.” —People

“A tender takedown of celebrity culture… Klam weaves poignant anecdotes about her own brushes with celebrities, and others… Satisfyingly, The Stars in Our Eyes is more than a pastiche of reflections and vignettes. Klam is a humorist of the thinking variety, and so she asks thoughtful questions and comes to thoughtful conclusions.” —Chicago Tribune

“A lively and engaging exploration of celebrity.” —Psychology Today

“This fascinating investigation from Julie Klam, author of You Had Me at Woof, looks into our societal obsession with the rich and famous... This hilarious societal examination is perfect for pop-culture lovers.” —Real Simple

“Julie Klam brings out a parade of the ‘famous’ and makes us look at the phenomenon of how and why these people sometimes occupy such a fixed and outsized place inside our brains. The Stars in Our Eyes is insightful, funny, and a total pleasure.” —Meg Wolitzer, bestselling author of The Interestings

“In her eye-opening and humorous collection of essays, Julie Klam explores the fascination with the rich and powerful, while also breaking down the challenges tied to fame and why all this actually matters.” —US Weekly

“A book for the celeb addicts! We’re talking the entire spectrum—from the A-list to reality stars down to ridiculously niche YouTubers and Instagram personalities. This book, which one could argue is an anthropological study of our modern-day culture (hey, no judgments here), examines why and how we’ve become so infatuated with famous people...  Let pop culture expert Julie Klam explain.” —W Magazine

“This funny, eye-opening look into our celebrity obsession will have you talking all summer about the stars and what our favorite famous people really say about us.” —PopSugar

“Klam, refreshingly, never positions herself as a scholar of celebrity. She writes like a gossipy spectator, armed with a tape recorder and wry, unhurried style; there’s a pleasant aimlessness to The Stars in Our Eyes, like a waiting-room conversation about a backissue of People.” —Lit Hub

“With insightful research that speaks to Klam’s personal interests, and lots of long quotes from Klam’s many interviewees, this will find its most enthusiastic readership among lovers of memoir and books about Hollywood.” —Booklist

“I really love Julie Klam’s smart and neurotic mind. In this book, she makes our celebrity obsession important and resonant.” –Jon Ronson, author of the New York Times–bestselling The Psychopath Test

“A celebrity book for grownups . . . Julie Klam—part memoirist, part social anthropologist, and part oral historian—manages to be both a fan and a critic alike.” —Meghan Daum, author of The Unspeakable: And Other Subjects of Discussion

“Julie Klam examines the reasons for our preoccupation with the world of fame and the celebration of it. . . . I loved this book, and kept sneaking away to read it.” —Carly Simon, New York Times–bestselling author of Boys in the Trees: A Memoir

“Perspicacious and generous of spirit, The Stars in Our Eyes is solid fun from beginning to end.” —Maria Semple, New York Times–bestselling author of Today Will Be Different

“What’s it really like to be famous, to have paparazzi waiting in the bushes outside your Malibu cottage? It happened to me once and nearly killed me. Julie Klam tells the real story behind celebrities once and for all.” —Erica Jong, bestselling author of Fear of Flying