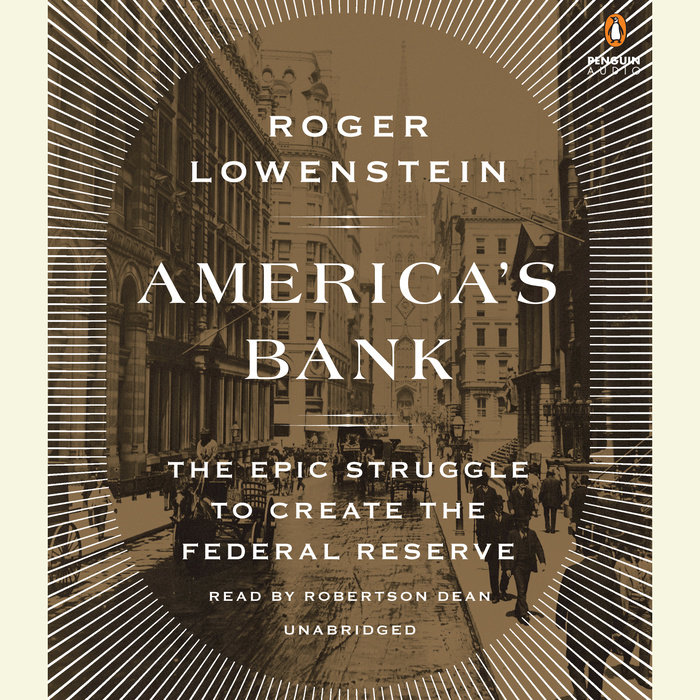 Written by: Roger Lowenstein
Read by: Robertson Dean
9 Hours and 39 Minutes Imprint: Penguin Audio Genre: Business & Economics - Corporate & Business History Release Date: October 20, 2015
A tour de force of historical reportage, America’s Bank illuminates the tumultuous era and remarkable personalities that spurred the unlikely birth of America’s modern central bank, the Federal Reserve. Today, the Fed is the bedrock of the financial landscape, yet the fight to create it was so protracted and divisive that it seems a small miracle that it was ever established.

For nearly a century, America, alone among developed nations, refused to consider any central or organizing agency in its financial system. Americans’ mistrust of big government and of big banks—a legacy of the country’s Jeffersonian, small-government traditions—was so widespread that modernizing reform was deemed impossible. Each bank was left to stand on its own, with no central reserve or lender of last resort. The real-world consequences of this chaotic and provincial system were frequent financial panics, bank runs, money shortages, and depressions. By the first decade of the twentieth century, it had become plain that the outmoded banking system was ill equipped to finance America’s burgeoning industry. But political will for reform was lacking. It took an economic meltdown, a high-level tour of Europe, and—improbably—a conspiratorial effort by vilified captains of Wall Street to overcome popular resistance. Finally, in 1913, Congress conceived a federalist and quintessentially American solution to the conflict that had divided bankers, farmers, populists, and ordinary Americans, and enacted the landmark Federal Reserve Act.

Roger Lowenstein—acclaimed financial journalist and bestselling author of When Genius Failed and The End of Wall Street—tells the drama-laden story of how America created the Federal Reserve, thereby taking its first steps onto the world stage as a global financial power. America’s Bank showcases Lowenstein at his very finest: illuminating complex financial and political issues with striking clarity, infusing the debates of our past with all the gripping immediacy of today, and painting unforgettable portraits of Gilded Age bankers, presidents, and politicians.

Lowenstein focuses on the four men at the heart of the struggle to create the Federal Reserve. These were Paul Warburg, a refined, German-born financier, recently relocated to New York, who was horrified by the primitive condition of America’s finances; Rhode Island’s Nelson W. Aldrich, the reigning power broker in the U.S. Senate and an archetypal Gilded Age legislator; Carter Glass, the ambitious, if then little-known, Virginia congressman who chaired the House Banking Committee at a crucial moment of political transition; and President Woodrow Wilson, the academician-turned-progressive-politician who forced Glass to reconcile his deep-seated differences with bankers and accept the principle (anathema to southern Democrats) of federal control. Weaving together a raucous era in American politics with a storied financial crisis and intrigue at the highest levels of Washington and Wall Street, Lowenstein brings the beginnings of one of the country’s most crucial institutions to vivid and unforgettable life. Readers of this gripping historical narrative will wonder whether they’re reading about one hundred years ago or the still-seething conflicts that mark our discussions of banking and politics today.
Read More
“As Roger Lowenstein tells it in ‘America’s Bank,’ an illuminating history of the Fed’s unlikely origin story, the central bank represented an ambitious — and not entirely successful — effort to resolve several long-standing tensions that lay at the heart of the American experiment in self-government: East Coast vs. the interior, urban sensibilities vs. rural ones, mercantile vs. agrarian interests, Wall Street vs. Main Street. It is still working out the kinks.”—Washington Post

“The fun of the book — and its enduring value — lies in the rich details about the cranks, pawns and prophets who jousted with one another in the days of Teddy Roosevelt, William Taft and Woodrow Wilson.” – Forbes

“Roger Lowenstein tells, vividly and compellingly,…the remarkable tale of the politics, disagreements, decisions and crises that culminated in the Federal Reserve Act…But Lowenstein, the author of several works on economics and finance, builds off it to describe the history of the era, the rise of the Progressive movement, the compromises and machinations that were critical to Congressional passage and the key figures in the drama of creating the Federal Reserve System.”—Robert Rubin, New York Times Book Review


“Depicting the effort to create a central bank, Fortune contributor Lowenstein tells a gripping tale with a trove of vivid characters and period details; you can almost see the handlebar mustaches and smell the oyster stuffing. And the broader cultural conflicts he describes—-distrust of centralized authority, tension between Main Street and Wall Street—are just as relevant now as they were in the era of Taft, Teddy, and Woodrow Wilson.” – Fortune Magazine


“Important and intriguing ….Lowenstein skillfully shows the connections between past and current events…. Readers seeking a comprehensive history of the Federal Reserve from its conception to modern times will find this work especially appealing.” – Library Journal

“Lowenstein vividly recounts the key moments in this hard-fought battle, from the Panic of 1907 to the 1912 presidential campaign to Wilson’s impassioned declaration to a joint session of Congress. Captivating and enlightening, this book brings a pivotal time in American history to life.” -Publishers Weekly

“His well-researched account for general readers takes us from Aldrich's secret meeting with leading Wall Street figures on Jekyll Island, off the Georgia coast, to plot banking reforms, to Woodrow Wilson's Princeton bedchamber, where the ill president persuaded Virginia Congressman Carter Glass of a key compromise to ensure creation of a national bank. Lowenstein doubts the Federal Reserve Act could be passed in today's volatile political climate, but he provides an unusually lucid history of our nation's central bank.” - Kirkus Reviews

“America’s Bank, Roger Lowenstein’s lively account of the creation of the Federal Reserve in 1913, resonates today as we debate the conduct of monetary policy and financial regulation.  Washington against the bankers, central authority against dispersed decision-making, rules against discretion, independence against accountability – it was all there, a century ago, resolved by political ingenuity into compromises that have stood the test of time.” - Paul Volcker, former chairman of the Federal Reserve


"The Federal Reserve feels as permanent a part of American life as, say, Mount Vernon or Monticello, but as Roger Lowenstein argues in this engaging and illuminating book, the central bank is, historically speaking, a relatively recent arrival. With grace and insight, Lowenstein takes us inside the creation of the Fed, a story of twists, turns--and lessons for our own time."- Jon Meacham, author of Thomas Jefferson and American Lion

“Set in the waning years of the Gilded Age, America's Bank tells the fascinating story of how an unlikely and often fractured coalition of Wall Street bankers and progressives, Southern Democrats and establishment Republicans came together to tame a chronically unstable financial system and create the Federal Reserve. Incisive and brilliantly researched, this is an important and original book about one of the most consequential pieces of legislation in our history with lessons aplenty for today.”
- Liaquat Ahamed, author of Lords of Finance


“The birth of the Federal Reserve is a fascinating and almost unknown story, with lessons even for today. In the hands of a master storyteller like Roger Lowenstein, it is also a page-turner."
- Alan S. Blinder, American economist and the author of After the Music Stopped: The Financial Crisis, the Response, and the Work Ahead


“Roger Lowenstein has accomplished a small miracle in America’s Bank: The Epic Struggle to Create the Federal Reserve. A masterful story-teller, Lowenstein has made sense of the Federal Reserve System for those of us who never quite understood how it worked or where it came from, and done so in a taut page-turner that is hard to put down. (I read it in two sittings.)  His book provides new insights into progressive-era reform; explains why, then and now, credit is more important to the economy than cash; and reintroduces us to three presidents and the remarkable group of bankers, businessmen, and congressmen who left their mark on one of the twentieth century’s most important pieces of legislation, the Federal Reserve Act of 1913.”- David Nasaw, author of The Patriarch and Andrew Carnegie
Read More 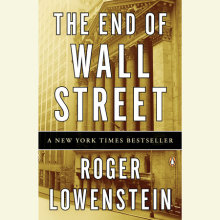 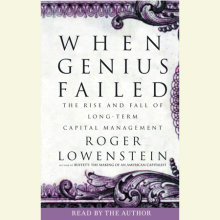