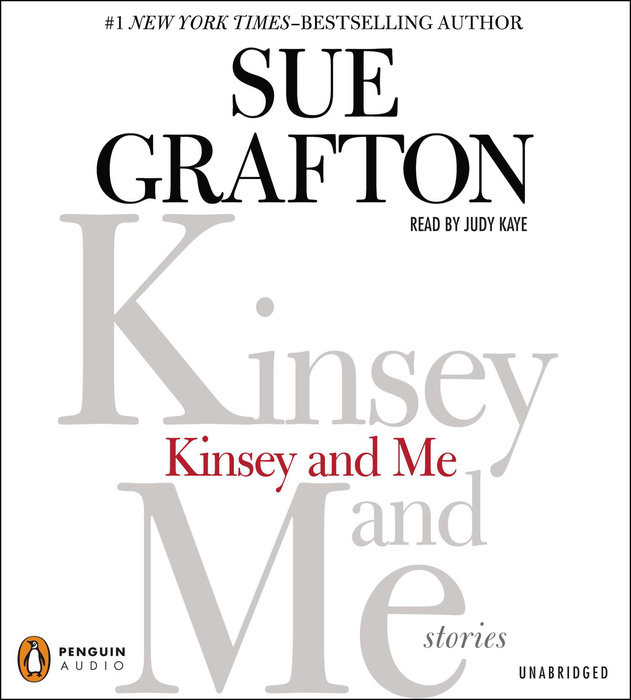 “I've come to believe that Grafton is not only the most talented woman writing crime fiction today but also that, regardless of gender, her Millhone books are among the five or six best series any American has ever written.”—Patrick Anderson, The Washington Post

Kinsey and Me has two parts: The nine Kinsey stories (1986-93), each a gem of detection; and the And Me stories, written in the decade after Grafton's mother died. Together, they show just how much of Kinsey is a distillation of her creator’s past even as they reveal a child who, free of parental interventions, read everything and roamed everywhere. But the dark side of such freedom was that very parental distance.

The same feisty voice and witty apercus readers fell in love with in A Is for Alibi permeate the Kinsey stories. Those in the And Me section trace a remarkable voyage, from anger to understanding, from pain to forgiveness. They take us into a troubled family, dysfunctional as most families are, each in their own way, but Grafton’s telling is sensitive, delicate, and ultimately, loving. Enriching the way we see Kinsey and know Sue, these stories are deeply affecting.
Read More
Praise for KINSEY AND ME

“Brutally honest, emotionally powerful, ‘Kinsey and Me’ is a revelatory triumph, a dance often macabre, but also a dance of celebration choreographed by a writer whose contemplations on justice never fail to offer rich rewards for legions of readers.”—Richmond Times-Dispatch

“[An] alternately hilarious and pitch-dark new collection . . . The Millhone pieces are sparkling little gems in which the more leisurely pace of the novels is compressed into a mere 20 pages or so; that Kinsey manages to introduce herself, establish the mystery and then solve it, credibly, in such a small span of time and space is nothing short of miraculous. The odd thing is that we don't feel slighted by the relative brevity of plot or even characterization; Grafton is a master of the quick, economical bit of detail, the phrase that tells (or, better, implies) everything. . . The Kit Blue stories are the book's dark heart, its bitter aftertaste, and may come as a grim surprise to many of the author's fans, whose impression of her is of a cheerful, indomitable woman more like the wisecracking Kinsey than the haunted Kit. Of course she is both, and she shares them with us here, bravely, in equal measure. Lucky us.”—Chicago Tribune

“Sue Grafton’s most insightful and revealing book to date is arguably ‘Kinsey and Me,’ . . . The catharsis of ‘Kinsey and Me’ is Grafton’s gift to her readers, who see that she is Kit Blue and Kinsey Milhone as well as a writer who, in creating both characters, has accepted and also transcended herself.  In identifying with Kit and Kinsey and Sue Grafton too, readers can better negotiate their own imperfect lives with humor and courage and strength.”—The Courier-Journal

"Terrific . . . The Kinsey stories and the Kit stories together open a window into Grafton's soul."—USA Today

“What could be better, while waiting for the twenty-third mystery in Grafton’s alphabet series, than this revelatory collection of stories featuring both Grafton’s alter ego, PI Kinsey Millhone, and the author herself? . . . Kinsey fanatics, sensing the coming end of the landmark series, will be thrilled to read this nonalphabetic extra.”—Booklist (starred review)

“Provides moving and surprising insights into the woman behind the bestsellers…fans will admire Grafton’s impressive output and feisty fictional detective all the more knowing the challenging beginnings from which both grew.”—Publishers Weekly

"It's a pleasure just to be in Kinsey's company as she refreshes the formula conventions with her snappy wit and candid opinions."—Marilyn Stasio, The New York Times Book Review
Read More