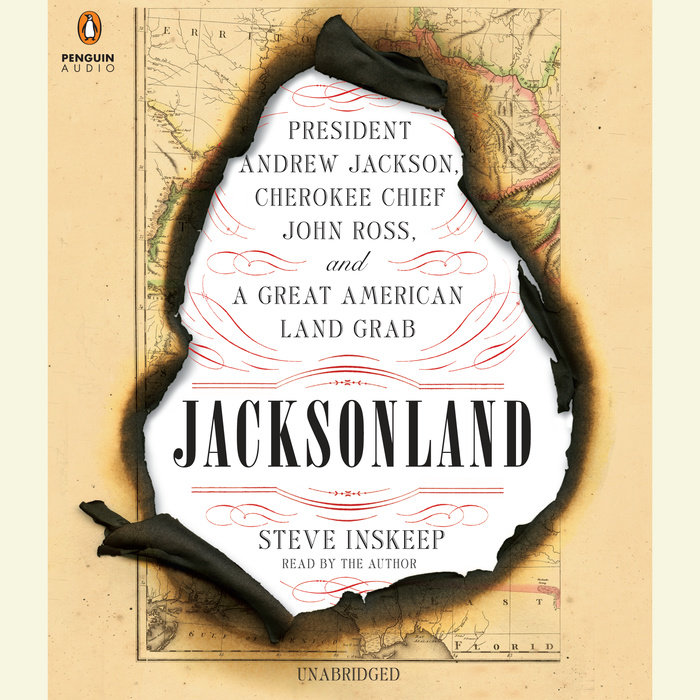 Jacksonland is the thrilling narrative history of two men—President Andrew Jackson and Cherokee chief John Ross—who led their respective nations at a crossroads of American history. Five decades after the Revolutionary War, the United States approached a constitutional crisis. At its center stood two former military comrades locked in a struggle that tested the boundaries of our fledgling democracy. Jacksonland is their story.

One man we recognize: Andrew Jackson—war hero, populist, and exemplar of the expanding South—whose first major initiative as president instigated the massive expulsion of Native Americans known as the Trail of Tears. The other is a half-forgotten figure: John Ross—a mixed-race Cherokee politician and diplomat—who used the United States’ own legal system and democratic ideals to oppose Jackson. Representing one of the Five Civilized Tribes who had adopted the ways of white settlers—cultivating farms, publishing a newspaper in their own language, and sending children to school—Ross championed the tribes’ cause all the way to the Supreme Court. He gained allies like Senator Henry Clay, Chief Justice John Marshall, and even Davy Crockett. In a fight that seems at once distant and familiar, Ross and his allies made their case in the media, committed civil disobedience, and benefited from the first mass political action by American women. Their struggle contained ominous overtures of later events like the Civil War and set the pattern for modern-day politics.

At stake in this struggle was the land of the Five Civilized Tribes. In shocking detail, Jacksonland reveals how Jackson, as a general, extracted immense wealth from his own armies’ conquest of native lands. Later, as president, Jackson set in motion the seizure of tens of millions of acres—“Jacksonland”—in today’s Deep South.

Jacksonland is the work of renowned journalist Steve Inskeep, cohost of NPR’s Morning Edition, who offers here a heart-stopping narrative masterpiece, a tragedy of American history that feels ripped from the headlines in its immediacy, drama, and relevance to our lives.

Harrowing, inspiring, and deeply moving, Inskeep’s Jacksonland is the story of America at a moment of transition, when the fate of states and nations was decided by the actions of two heroic yet tragically opposed men.

CANDICE MILLARD, author of Destiny of the Republic and The River of Doubt
“Inskeep tells this, one of the most tragic and transformative stories in American history, in swift, confident, colorful strokes. So well, and so intimately, does he know his subject that the reader comes away feeling as if Jackson and Ross’s epic struggle for the future of their nations took place yesterday rather than nearly two hundred years ago.”

Read More
Washington Post:
“Surely everyone knows, or should know, about the Cherokee Trail of Tears - an ordeal imposed upon thousands of Cherokees, who, after fighting and winning a judgment in the Supreme Court against their removal from the Eastern Seaboard, were nonetheless dispossessed of their tribal lands and marched to Indian Territory in the early 1830s. The scale of the removal was staggering. Not only the Cherokee but also the Muskogee, Seminole, Chickasaw, Choctaw, Creek and many of their African-American slaves were removed in one of the largest and most brutal acts of aggression ever committed by the United States. But not till now, with the coming of NPR journalist Steve Inskeep's magnificent book, focusing as it does on the two key players - President Andrew Jackson and Cherokee Principal Chief John Ross - has this episode in American history been rendered in such personal detail and human touch. . . The story of the Cherokee removal has been told many times, but never before has a single book given us such a sense of how it happened and what it meant, not only for Indians, but also for the future and soul of America.”

Chicago Tribune:
“Grounded in vivid primary sources, it is also a moving tale of leadership, betrayal and (violated) minority rights, culminating in the tragedies we know as Indian removal and the Trail of Tears. . . "Jacksonland" successfully transports readers to an era when travel was slow and dangerous, racial and sectional divisions growing, and America very much a work in progress . . . Inskeep writes with the urgency of a thriller, a cinematic eye and a consciousness that even history's apparent losers won occasional important battles.

Pittsburgh Post-Gazette:
“The narrative reads as if written by a watchful observer. It brings a part of history alive that is not usually discussed with this much depth.”

Kirkus:
“Confident, lucid prose. . . . The author knows how to hold an audience. . . Well-researched, -organized, and -presented, this is a sober, balanced examination of the origins of one of the more regrettable chapters in American history. “

JON MEACHAM, author of American Lion: Andrew Jackson in the White House
“Steve Inskeep has found an illuminating and provocative way to talk about the American past—and, truth be told, the American present and future too. By taking us back to the epic struggle between Andrew Jackson and Chief John Ross, Inskeep tells an essential story of geography, greed, and power: and the forces he so clearly delineates are the ones that shape us still.”

CANDICE MILLARD, author of Destiny of the Republic and The River of Doubt
“Inskeep tells this, one of the most tragic and transformative stories in American history, in swift, confident, colorful strokes. So well, and so intimately, does he know his subject that the reader comes away feeling as if Jackson and Ross’s epic struggle for the future of their nations took place yesterday rather than nearly two hundred years ago.”

JAMES McPHERSON, author of Embattled Rebel and Battle Cry of Freedom
“This narrative of the forced removal of Cherokee Indians from their ancient homeland in the 1830s is framed as a contest between two determined and stubborn adversaries who had once been allies. President Andrew Jackson eventually prevailed over Cherokee chief John Ross in a conflict that culminated in the infamous Trail of Tears. Steve Inskeep skillfully captures the poignant drama of this tragic tale.”

DANIEL FELLER, director of the Papers of Andrew Jackson, University of Tennessee
“Few episodes in American history evoke greater controversy and bitterness than Indian removal and the Cherokee Trail of Tears. Steve Inskeep’s Jacksonland brilliantly illuminates this troubling story. Told with pinpoint accuracy, evenhanded sympathy, and sparkling prose, this is truly a tale for our times.”

PRINCIPAL CHIEF BILL JOHN BAKER, Cherokee Nation
“Steve Inskeep has paid incredible attention to detail and his references are impeccable and well researched. History often overlooks, or briefly mentions, that one of Andrew Jackson's major initiatives as President of the United States was the removal of Indian tribes, including the Cherokee, from their ancestral homelands. The honest and factual detailing of how Cherokee traditional lands were usurped is compelling, and I hope it gives contemporary American readers a new perspective on our collective history.  Andrew Jackson and his political allies in Congress wanted what we had and they simply took it by any means necessary. Clearly, our ancestors didn’t stand a chance. Steve Inskeep tells the story fairly and pays proper due diligence to the politics of the day, especially the treatment of the Five Civilized Tribes."

H.W. BRANDS, author of The Man Who Saved the Union and Andrew Jackson
“History is complicated, and in its complications lies its appeal. Steve Inskeep understands this, and his elegantly twinned account of Andrew Jackson and John Ross shows just how complicated and appealing history can be. Each man was a bundle of contradictions; together their lives illuminate the confusing, sometimes infuriating adolescent years of the American republic.”