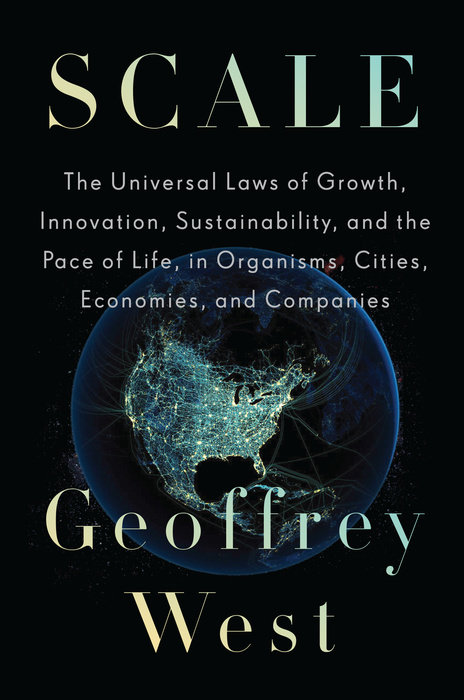 From one of the most influential scientists of our time, a dazzling exploration of the hidden laws that govern the life cycle of everything from plants and animals to the cities we live in.

Visionary physicist Geoffrey West is a pioneer in the field of complexity science, the science of emergent systems and networks. The term “complexity” can be misleading, however, because what makes West’s discoveries so beautiful is that he has found an underlying simplicity that unites the seemingly complex and diverse phenomena of living systems, including our bodies, our cities and our businesses.

Fascinated by aging and mortality, West applied the rigor of a physicist to the biological question of why we live as long as we do and no longer. The result was astonishing, and changed science: West found that despite the riotous diversity in mammals, they are all, to a large degree, scaled versions of each other. If you know the size of a mammal, you can use scaling laws to learn everything from how much food it eats per day, what its heart-rate is, how long it will take to mature, its lifespan, and so on. Furthermore, the efficiency of the mammal’s circulatory systems scales up precisely based on weight: if you compare a mouse, a human and an elephant on a logarithmic graph, you find with every doubling of average weight, a species gets 25% more efficient—and lives 25% longer. Fundamentally, he has proven, the issue has to do with the fractal geometry of the networks that supply energy and remove waste from the organism’s body.

West’s work has been game-changing for biologists, but then he made the even bolder move of exploring his work’s applicability. Cities, too, are constellations of networks and laws of scalability relate with eerie precision to them. Recently, West has applied his revolutionary work to the business world. This investigation has led to powerful insights into why some companies thrive while others fail. The implications of these discoveries are far-reaching, and are just beginning to be explored. Scale is a thrilling scientific adventure story about the elemental natural laws that bind us together in simple but profound ways. Through the brilliant mind of Geoffrey West, we can envision how cities, companies and biological life alike are dancing to the same simple, powerful tune.
Read More
“An enchanting intellectual odyssey…also a satisfying personal and professional memoir of a distinguished scientist whose life’s work came to be preoccupied with finding ways to break down traditional boundaries between disciplines to solve the long-term global challenges of sustainability…. Mr. West manages to deliver a lot of theory and history accessibly and entertainingly… Provocative and fascinating.”—The New York Times

“Scale, a grand synthesis of topics [Geoffrey West] has studied for several decades, makes an important and eloquent case for the significance [of universal laws of size and growth] in an ecology of the natural and human world — and in understanding whether the two can fit together.” —Nature

“West’s insightful analysis and astute observations patiently build an intellectual framework that is ultimately highly rewarding, offering a new perspective on the many scales with which nature and society challenge us…A fascinating journey.” – Science Magazine

"This is the sort of big-ideas book that comes along only every few years, the kind that changes the conversation in boardroom, common room and dining room....A book full of thrilling ideas." —The Sunday Times (London)

“From a dean of complexity theory comes a sharp consideration of the pace and pattern of life in a universe of "complex adaptive systems” …West's book is a succession of charts, graphs, and aha moments, all deeply learned but lightly worn. By the end of the book, readers will understand such oddments as why it is that the hearts of all animals, from mouse to elephant, beat roughly the same number of times across a lifespan and why the pace of life increases so markedly as the population grows (which explains why people walk faster, it turns out, in big cities than out in the countryside) …Illuminating and entertaining—heady science written for a lay readership, bringing scaling theory and kindred ideas to a large audience.”—Kirkus Reviews

"I can think of no more exciting thinker in the world today than Geoffrey West. By bringing a physicist's razor-sharp mind to wonderfully surprising questions -- 'Why Aren’t There Mammals the Size of Tiny Ants?' or 'Are Cities and Companies Just Very Large Organisms?' -- West forces us to see everything anew, from our own bodies to the mega-cities our species increasingly chooses to inhabit. Scale is a firework display of popular science."
—Niall Ferguson, senior fellow, the Hoover Institution

“This spectacular book on how logarithmic scaling governs everything is packed with news—from the self-similar dynamics of cells and ecosystems to exactly why companies always die and cities don’t. I dog-eared and marked up damn near every page.”
—Stewart Brand, creator of the Whole Earth Catalog

“Geoffrey West's Scale is filled with brilliant insights. He illuminates the laws of nature underlying everything from tiny organisms and humans to cities and companies, and provides a quantitative framework for decoding the deep complexity of our interconnected world. If you want to know why companies fail, how cities persist and what is needed to sustain our civilization in this era of rapid innovation, read this amazing book.”
—Marc Benioff, CEO of Salesforce

“When Geoffrey West, a brilliant theoretical physicist, turned his lens to the study of life spans, biological systems or cities he stumbled onto a game-changing universal insight about growth and sustainability. Scale is dazzling and provocative and West proves himself to be a compelling and entertaining writer—this is a book we will be talking about for a long time.”
—Abraham Verghese, author of Cutting for Stone

“If there were a Nobel Prize for transdisciplinary science Geoffrey West would have won it for the work covered in Scale. This is a book of great originality and deep importance, containing startling insights about topics as seemingly unrelated as aging and death, sleep, metabolism, cities, energy use, creativity, corporations, and even the sustainability of our existence.  If you are curious about how the world really works, you must read this book.”
—Bill Miller, Chairman, Emeritus, Sante Fe Institute

“Geoffrey West’s Scale is a revelation. Based on his path breaking theory and research on super-linear scaling, it provides powerful new insights into the basic scientific laws that power our modern society and economy, its startup companies, large corporations and cities.  The book is a must read for CEOs, technologists, mayors, urban leaders and anyone who wants to understand the simple laws that shape the complex, self-organizing world in which we live.”
—Richard Florida, author of The Rise of the Creative Class

“This is an important and original book, of immense scope. Geoffrey West is a polymath, whose insights range over physics, biology and the social sciences. He shows that the sizes, shapes and lifetimes of living things - despite their amazing diversity -- display surprising correlations and patterns, and that these follow from basic physical principles. He then discovers, more surprisingly, the emergence of similar 'scaling laws' in human societies - in our cities, companies and social networks. These findings are presented in clear non-technical prose, enlivened by anecdotes which convey how these concepts arose, and thoughtful assessment of why they're important for those planning our future. This fascinating book deserves very wide readership.”
—Martin Rees, Astronomer Royal and author of Just Six Numbers

“Each human should learn to read and write, to count, and for those who know how to count, scalability. Scaling is the most important yet most hidden and rarely discussed attribute—without understanding it one cannot possibly understand the world. This book will expand your thinking from three dimensions to four. Get two copies, just in case you lose one.”
—Nassim Nicholas Taleb, author of the Incerto

“An absolutely riveting read. Like the best detective story, West lays out the amazing challenge of understanding why animals, cities and companies all scale so uniformly and then skillfully lets us into the secrets that his detective work has uncovered. This book captures the spirit of science in the 21st century, revealing the deep connections not just across physics and biology but society and life. The book is a perfect balance between the big scientific story and West’s own personal narrative. We accompany the author on his quest to face up to his own mortality while at the same time being exposed to the theoretical discoveries that West has pioneered in his groundbreaking work.”
—Marcus du Sautoy, Simonyi Professor for the Public Understanding of Science at Oxford University and author of The Great Unknown

“It’s rare in the history of science that someone has a big, bold, beautiful, stunningly simple new idea that also turns out to be right. Geoffrey West had one. And Scale is its story.”
—Steven Strogatz, Professor of Mathematics at Cornell University and  author of The Joy of X
Read More