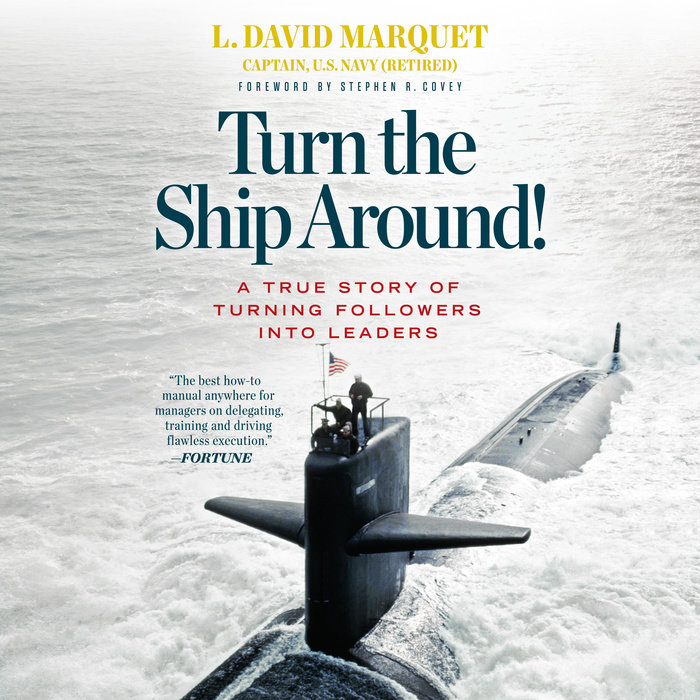 Since Turn the Ship Around! was published in 2013, hundreds of thousands of readers have been inspired by former Navy captain David Marquet’s true story. Many have applied his insights to their own organizations, creating workplaces where everyone takes responsibility for his or her actions, where followers grow to become leaders, and where happier teams drive dramatically better results.

Marquet was a Naval Academy graduate and an experienced officer when selected for submarine command. Trained to give orders in the traditional model of “know all–tell all” leadership, he faced a new wrinkle when he was shifted to the Santa Fe, a nuclear-powered submarine. Facing the high-stress environment of a sub where there’s little margin for error, he was determined to reverse the trends he found on the Santa Fe: poor morale, poor performance, and the worst retention rate in the fleet.

Almost immediately, Marquet ran into trouble when he unknowingly gave an impossible order, and his crew tried to follow it anyway. When he asked why, the answer was: “Because you told me to.” Marquet realized that while he had been trained for a different submarine, his crew had been trained to do what they were told—a deadly combination.

That’s when Marquet flipped the leadership model on its head and pushed for leadership at every level. Turn the Ship Around! reveals how the Santa Fe skyrocketed from worst to first in the fleet by challenging the U.S. Navy’s traditional leader-follower approach. Struggling against his own instincts to take control, he instead achieved the vastly more powerful model of giving control to his subordinates, and creating leaders.

Before long, each member of Marquet’s crew became a leader and assumed responsibility for everything he did, from clerical tasks to crucial combat decisions. The crew became completely engaged, contributing their full intellectual capacity every day. The Santa Fe set records for performance, morale, and retention. And over the next decade, a highly disproportionate number of the officers of the Santa Fe were selected to become submarine commanders.

Whether you need a major change of course or just a tweak of the rudder, you can apply Marquet’s methods to turn your own ship around.
Read More
"One of the top 12 business books of all time." --Motley Fool and USA Today, November 2014

"I don't know of a finer model of this kind of empowering leadership than Captain Marquet. And in the pages that follow you will find a model for your pathway." --Stephen R. Covey, author of The 7 Habits of Highly Effective People

"To say I'm a fan of David Marquet would be an understatement... I'm a fully fledged groupie. He is the kind of leader who comes around only once a generation. He is the kind of leader who doesn't just know how to lead, he knows how to build leaders. His ideas and lessons are invaluable to anyone who wants to build an organization that will outlive them. -- Simon Sinek, optimist and author of Start with Why

"How do we release the intellect and initiative of each member of the organization toward a common purpose? Here's the answer: With fascinating storytelling and a deep understanding of what motivates and inspires. David Marquet provides leaders in the military, business, and education a powerful vehicle that will delight, provoke, and encourage them to act." -- Michael P. Peters, president of the St. John's College, Santa Fe

"I owe a lot to Captain David Marquet ... not only for turning the Santa Fe around during some REALLY bad times but I learned many lessons on leadership from him that have been invaluable in my post-Navy life. I preach the three legs (control, competence, clarity) of Leader-Leader everyday to empower my people and move the decisions to where the information lives... I used these principles to turn around the GE Dallas Generator Repair Department, which was in crisis when I arrived in 2010 and now is the best Generator Repair Department in the GE Network... Now I am tasked with turning around the Dallas Steam Turbine Repair Department..." -- Adam McAnally, Steam Turbine Cell Leader at the GE Dallas Service Center and former crewmember, USS Santa Fe

"This terrific read actually provides new and valuable insights into how to lead. And nothing important gets done without leadership. Captain Marquet takes you through his life of learning how to lead, and presents you with a winning formula: not leader-follower, but leader-leader. It's about leading by getting others to take responsibility--and like it. It works for business, politics, and life." -- Leslie H. Gelb, president emeritus of the Council on Foreign Relations, a member of several business boards, and a former columnist for The New York Times

"It's the Hunt for Red October meets Harvard Business School. Turn the Ship Around! is the consummate book on leadership for the Information Age--where unleashing knowledge workers' intellectual capital is pivotal in optimizing organizational performance: from maximizing market share and minimizing customer churn to improving margins. Capt. Marquet's thesis is a complete paradigm shift in leadership philosophy. This new approach to leadership is applicable in all industries and across all corporate functions. If you're an Organizational Behavior or Leadership expert or enthusiast this book can have a substantial impact on you and your organization s ability to meet its goals." -- Joe DeBono, Founder and President of MBA Corps and Merrill Lynch Wealth Manager

"David Marquet's message in Turn the Ship Around! inspires the empowerment of engaged people and leadership at all levels. He encourages leaders to release energy, intellect, and passion in everyone around them. Turn the Ship Around! challenges the paradigm of the hierarchical organization by revealing the process to tear down pyramids, create a flat organization, and to develop leaders, not followers." -- Dale R. Wilson, Sr., business management professional, and editor/blogger at Command Performance Leadership (commandperformanceleadership.wordpress.com)

"This is the story of Captain David Marquet's unprecedented experiment in the most rigid of environments on the Santa Fe, a U.S. Navy nuclear-powered submarine. He had the courage to operate counter-culture, reengineering the very definition of leadership accepted by the U.S. Navy for as long as it has existed. He took huge risk to do this. The outcome was revolutionary - within a few short months, the crew of the Santa Fe went from worst to first. In today's information age, Human Capital is our most precious resource. It is the 21stCentury weapon of choice. Captain David Marquet's experiment in leadership has far greater application to the entire business world. This is thought leadership." -- Charlie Kim, Founder & CEO of Next Jump, Inc.

"Leaders and managers face an increasingly complex world, where precise execution, teamwork and enabling of talent are competitive advantages. David Marquet provides a blue print, along with real-life examples and implementation mechanisms. Anyone who is charged with leading and making a difference needs to read this." -- John Cooper, President and CEO, Invesco Distributors

"David Marquet's book discusses 'successful motivation' that provided his people the energy to overcome difficult obstacles. The values that he imbued in his folks provided a 'burst of energy' that positively energized them by satisfying their needs for achievement, providing appropriate recognition, providing a sense of belonging, developing self-esteem, permitting a feeling of control, and permitting an ability to live up to appropriate standards. This type of leadership energizes the work force and allows senior management to 'paint the future and light a path that takes the entire team to it.' This is a must read for all who desire good moral influence on the work force!" -- Vice Admiral Al Konetzni, (USN, ret.) Former Pacific Fleet submarine commander.

"The legacy of a Commanding Officer, or the leader of any organization, is how well the organization performs after he/she departs and the subsequent motivation, success and institutional contribution of those next generation leaders trained and developed. Read Turn the Ship Around! and you will learn how to build an enduring high performer, where people can't wait to get to work." -- Admiral Thomas B. Fargo (USN, ret.) Former Commander U.S. Pacific Command Chairman, Huntington Ingalls Industries

"What I learned from and with David Marquet is that developing a bottom-up, Leader-Leader culture produces highly empowered people and highly effective teams. It worked on a nuclear submarine and it worked in the mountains of Afghanistan. That said, cultivating a Leader-Leader culture is much easier said than done because you must overturn almost everything people grow up thinking and learning about leadership." -- Captain (sel) Dave Adams, USN, Former Weapons Officer, USS Santa Fe, Khost Province PRT commander, Commanding Officer, USS Santa Fe

"Captain Marquet's compelling leadership journey inspires each of us to imagine a world where every human being is intellectually engaged and fully committed to solving our toughest challenges. If it can be done on a nuclear submarine, it can be done everywhere. Turn the Ship Around! delivers a brilliant message." -- Liz Wiseman, Author of Multipliers: How the Best Leaders Make Everyone Smarter
Read More 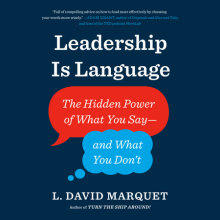 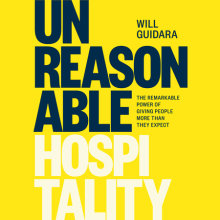 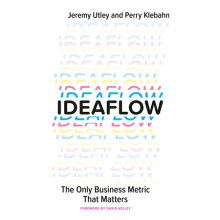 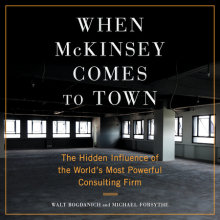