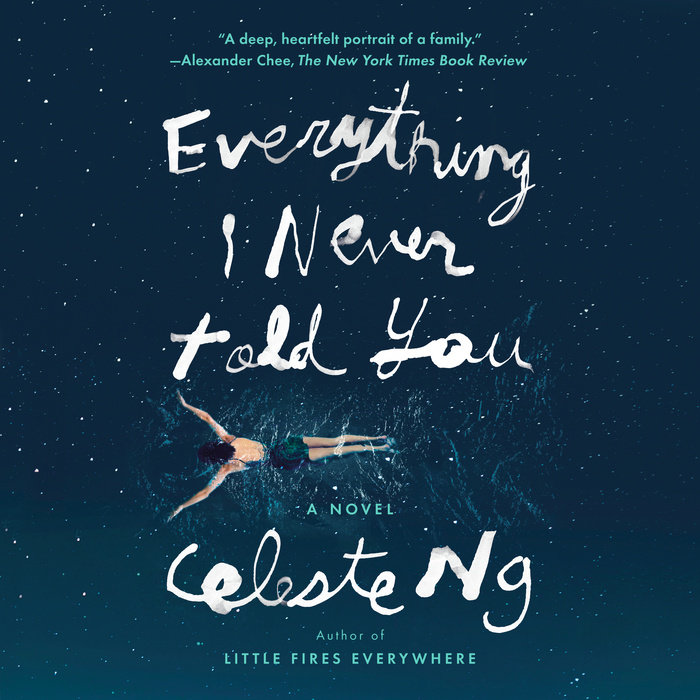 “A taut tale of ever deepening and quickening suspense.” —O, the Oprah Magazine

“Explosive . . . Both a propulsive mystery and a profound examination of a mixed-race family.” —Entertainment Weekly

“Lydia is dead. But they don’t know this yet.” So begins this exquisite novel about a Chinese American family living in 1970s small-town Ohio. Lydia is the favorite child of Marilyn and James Lee, and her parents are determined that she will fulfill the dreams they were unable to pursue. But when Lydia’s body is found in the local lake, the delicate balancing act that has been keeping the Lee family together is destroyed, tumbling them into chaos. A profoundly moving story of family, secrets, and longing, Everything I Never Told You is both a gripping page-turner and a sensitive family portrait, uncovering the ways in which mothers and daughters, fathers and sons, and husbands and wives struggle, all their lives, to understand one another.
Read More
School Library Journal’s Best Books of the Year So Far
BookRiot’s The Best Books of 2014 So Far
Booklist’s Top Ten First Novels of 2014
Booklist Editors' Choice of 2014
Time Out NY’s 10 Best Books of 2014 – #10
O Magazine’s 15 Must Read Literature & Fiction Books of the Year So Far, #4
NYTBR 100 Notable Books of 2014
Huffington Post’s Best Books of 2014
NPR Books of the Year
Electric Lit Books of the Year
Buzzfeed’s Best Fiction Books of 2014

Alexander Chee, The New York Times Book Review:
“If we know this story, we haven’t seen it yet in American fiction, not until now… Ng has set two tasks in this novel’s doubled heart—to be exciting, and to tell a story bigger than whatever is behind the crime. She does both by turning the nest of familial resentments into at least four smaller, prickly mysteries full of secrets the family members won’t share… What emerges is a deep, heartfelt portrait of a family struggling with its place in history, and a young woman hoping to be the fulfillment of that struggle. This is, in the end, a novel about the burden of being the first of your kind—a burden you do not always survive.”

Los Angeles Times:
“Excellent…an accomplished debut… heart-wrenching…Ng deftly pulls together the strands of this complex, multigenerational novel. Everything I Never Told You is an engaging work that casts a powerful light on the secrets that have kept an American family together—and that finally end up tearing it apart.”

Boston Globe:
“Wonderfully moving…Emotionally precise…A beautifully crafted study of dysfunction and grief…[This book] will resonate with anyone who has ever had a family drama.”

San Francisco Chronicle:
“A subtle meditation on gender, race and the weight of one generation’s unfulfilled ambitions upon the shoulders—and in the heads—of the next… Ng deftly and convincingly illustrates the degree to which some miscommunications can never quite be rectified.”

O, The Oprah Magazine:
“Cleverly crafted, emotionally perceptive… Ng sensitively dramatizes issues of gender and race that lie at the heart of the story… Ng’s themes of assimilation are themselves deftly interlaced into a taut tale of ever deepening and quickening suspense.”

Los Angeles Review of Books:
“Ng moves gracefully back and forth in time, into the aftermath of the tragedy as well as the distant past, and into the consciousness of each member of the family, creating a series of mysteries and revelations that lead back to the original question: what happened to Lydia?...Ng is masterful in her use of the omniscient narrator, achieving both a historical distance and visceral intimacy with each character’s struggles and failures…On the surface, Ng’s storylines are nothing new. There is a mysterious death, a family pulled apart by misunderstanding and grief, a struggle to fit into the norms of society, yet in the weaving of these threads she creates a work of ambitious complexity. In the end, this novel movingly portrays the burden of difference at a time when difference had no cultural value…Compelling.”

Entertainment Weekly:
“Both a propulsive mystery and a profound examination of a mixed-race family, Ng’s explosive debut chronicles the plight of Marilyn and James Lee after their favored daughter is found dead in a lake.”

Marie Claire:
“The mysterious circumstances of 16-year-old Lydia Lee’s tragic death have her loved ones wondering how, exactly, she spent her free time. This ghostly debut novel calls to mind The Lovely Bones.”

Huffington Post:
“A powerhouse of a debut novel, a literary mystery crafted out of shimmering prose and precise, painful observation about racial barriers, the burden of familial expectations, and the basic human thirst for belonging… Ng’s novel grips readers from page one with the hope of unraveling the mystery behind Lydia’s death—and boy does it deliver, on every front.”

Chris Schluep, Parade:
“The first chapter of Celeste Ng’s debut novel is difficult—the oldest daughter in a family is dead—but what follows is a brilliantly written, surprisingly uplifting exploration of striving in the face of alienation and of the secrets we keep from others. This could be my favorite novel of the year.”

Kevin Nguyen, Grantland:
“The emotional core of Celeste Ng’s debut is what sets it apart. The different ways in which the Lee family handles Lydia’s death create internal friction, and most impressive is the way Ng handles racial politics. With a deft hand, she loads and unpacks the implications of being the only Chinese American family in a small town in Ohio.”

Cleveland Plain-Dealer:
“Beautiful and poignant…. deftly drawn….It’s hard to believe that this is a debut novel for Celeste Ng. She tackles the themes of family dynamics, gender and racial stereotyping, and the weight of expectations, all with insight made more powerful through understatement. She has an exact, sophisticated touch with her prose. The sentences are straightforward. She evokes emotions through devastatingly detailed observations.”

Minneapolis Star Tribune:
“Perceptive…a skillful and moving portrayal of a family in pain…It is to Ng’s credit that it is sometimes difficult for the reader to keep going; the pain and unhappiness is palpable. But it is true to the Lees, and Ng tells all.”

St. Louis Post-Dispatch:
“Impressive… In its evocation of a time and place and society largely gone but hardly forgotten, Everything I Never Told You tells much that today’s reader should learn, ponder and appreciate.”

The Missourian:
“Quiet and intense…A family drama that reveals its secrets slowly, drawing you in."

Dallas Morning News:
“Powerful…[A] beautifully crafted story of a family in pain, and the many reasons, personal and societal, that the Lees have lived most of their lives as strangers to one another. Making us care so deeply about her characters is Ng’s triumph.”

Ann Arbor Observer:
“Deeply moving…masterful…[Ng] doesn’t give her characters any easy futures or her readers any false hope.”

MORE magazine:
“With the skill of a veteran heart surgeon…Ng writes of maternal expectations, ingrained prejudice and sibling conflict in a culture that has just begun to grapple with interracial marriage and shifting gender roles.”

Time Out New York:
“[A] tender debut…The novel touches on the myriad paths grief may take, the secrets everyone keeps and how much a tragedy can affect relationships in a family.”

Sara Vilkomerson, Entertainment Weekly:
“When Lydia Lee, the favored daughter in a mixed-race family in ‘70s Ohio, turns up dead, the Lees’ delicate ecosystem is destroyed. Her parents’ marriage unravels, her brother is consumed by vengeance, and her sister—always an afterthought—hovers nervously, knowing more than anyone realizes. Ng skillfully gathers each thread of the tragedy, uncovering secrets and revealing poignant answers. Grade: A-.”

Vogue.com:
“[A] moving tale… of daughters for whom cultural disconnect is but the first challenge.”

Bustle:
“[A] haunting debut…Ng is a gifted storyteller but an even more gifted character-builder…A powerful book about how those left behind must learn to go on living.”

Amanda Nelson, Book Riot:
“On the surface, this is about a mixed-race Asian-American family dealing with and trying to solve the mysterious death of their favorite teenaged daughter in ‘70s Ohio (this isn’t a spoiler, it happens in the first sentence). What it’s really about all the ways we can be an ‘other’—in society, in our own marriages, in our jobs, and to our parents or children. It’s also about pressure—the pressure to be with people who are like ourselves, and to fit in, and to be everything our parents want us to be. It’s about giving up your career to become a wife and mother, and what that means and doesn’t mean. It’s about dealing with prejudice. It’s about secrets and happiness and misery, and all the things we never tell the people we love. It’s about everything, is what I’m saying, and not a single word is wasted or superfluous.”

Publishers Weekly (starred):
“This emotionally involving debut novel explores themes of belonging using the story of the death of a teenage girl, Lydia, from a mixed-race family in 1970s Ohio…Lydia is remarkably imagined, her unhappy teenage life crafted without an ounce of cliché. Ng’s prose is precise and sensitive, her characters richly drawn.”

Booklist (starred):
“Tantalizingly thrilling, Ng’s emotionally complex debut novel captures the tension between cultures and generations with the deft touch of a seasoned writer. Ng will be one to watch.”

Kirkus Reviews:
“Ng expertly explores and exposes the Lee family’s secrets… These long-hidden, quietly explosive truths, weighted by issues of race and gender, slowly bubble to the surface of Ng’s sensitive, absorbing novel and reverberate long after its final page. Ng’s emotionally complex debut novel sucks you in like a strong current and holds you fast until its final secrets surface.”

Jesmyn Ward, National Book Award-winning author of Salvage the Bones:
“Ng tells a story weighted by death and grief that is vital in all the essential ways; these characters betray and love blindly and are needy and accuse and forgive. They are achingly human, and Ng's writing about them is tender and merciless all at once. At the same time, her story is also about what it means to live in two worlds at the same time, to be Asian and American, an insider and an outsider, and Ng writes about all this and more with terrific nuance.”

Uwem Akpan, #1 New York Times bestselling author of Say You’re One of Them:
“I couldn’t stop reading Everything I Never Told You . . . the writing is so smooth and keenly observed. The portrait of each member of the Lee family, the exploration of their mixed-race issues and the search for the killer of their sister and daughter, Lydia, pulled at my heartstrings to the very end.”

Dan Chaon, author of Await Your Reply:
"Everything I Never Told You is a suspenseful and emotionally complex literary mystery novel, which, weaving back and forth in time, unlocks the secrets beneath the surface of family life. Celeste Ng has written a compellingly tense and moving first book."

Ru Freeman, author of On Sal Mal Lane and A Disobedient Girl:
"Celeste Ng leavens the bridge between the disappearance of a young girl, and the personal histories that precede it, with the larger canvas issues of race and gender, without straying from the riveting emotional territory that make up the cornerstones of family: what is given, what is withheld, and what can never be known. Lydia Lee is every parent's dream, fear, and devastation, wholly loved, just as completely lost. It is impossible to resist grieving alongside each one of these bereft, deeply realized characters, for we live their lives, and their story becomes ours from the first paragraph of this marvelous book."

Book Passage (Corte Madera, CA):
“More than a simple portrait of love and loss, this is a beautiful and haunting story of a lost teenage girl attempting to discover her own voice.”
Read More 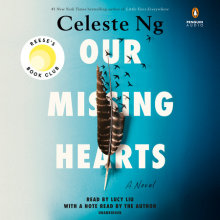 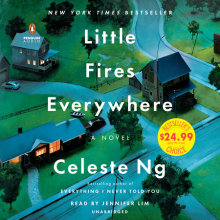