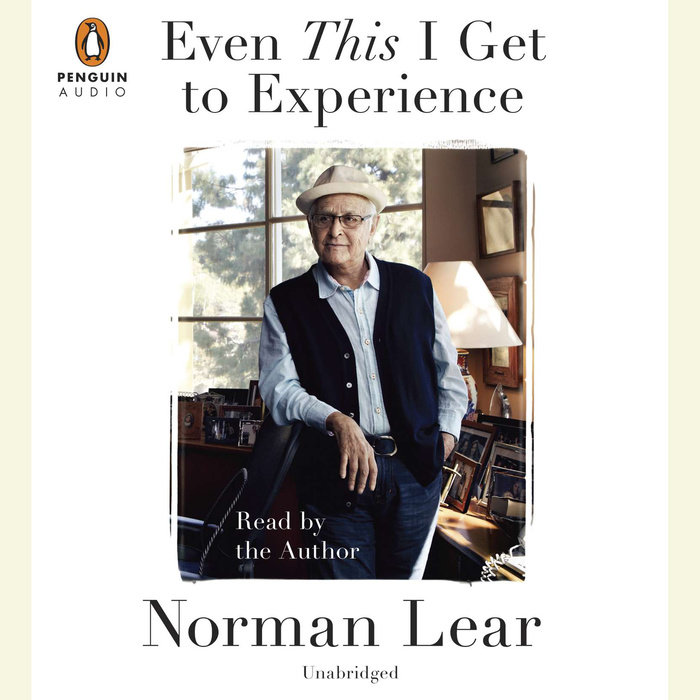 Written by: Norman Lear
Read by: Norman Lear
19 Hours Imprint: Penguin Audio Genre: Biography & Autobiography - Entertainment & Performing Arts Release Date: October 14, 2014
The dynamic and always controversial television producer shares fifty years of show business and politics, with all the candor and wisdom expected from the creator of All in the Family

The legendary creator of iconic television programs All in the Family, Sanford and Son, Maude, Good Times, The Jeffersons, and Mary Hartman, Mary Hartman, Norman Lear remade our television culture—while leading a life of unparalleled political, civic, and social involvement. Sharing the wealth of Lear’s ninety years, Even This I Get to Experience is a memoir as touching and remarkable as the life he has led.

In the nineteen seventies, Lear’s comedies were viewed by one hundred and twenty million people per week—yes, one hundred and twenty million— with stories that reflected the most serious issues of their lives and still left them howling. But before this, Lear led a charmed life throughout postwar Hollywood’s golden years, befriending the likes of Carl Reiner and Mel Brooks; writing and directing Frank Sinatra, Robert Redford, Dick Van Dyke, and Martha Raye; becoming the highest paid comic writer in the country while working for Jerry Lewis and Dean Martin. Not to mention, Lear flew some fifty bombing missions over Germany with the Fifteenth Air Force.

Shamelessly in love with the country the Founding Fathers laid out for him while his own father was serving time, Lear won the first American Legion Oratorical Contest speaking about the Constitution. He later founded People For the American Way, a national organization to protect the civil rights and liberties of us all, and bought an original copy of the Declaration of Independence, printed the night of July 4, 1776, not to hang on a wall in his home, but to travel across the country to schools, and libraries, and public institutions to be shared with citizens everywhere.

Married three times and the father of six children ranging from nineteen to sixty-eight, Lear’s penetrating look at family life, parenthood, and marriage is a volume in itself. Told with the charm and candor of one of the century’s greatest storytellers, Even This I Get To Experience is nothing less than a profound gift, endlessly readable and characteristically unforgettable.
Read More
The Wall Street Journal:
“The Norman Lear who emerges from “Even This I Get to Experience” is engaging and unpompous, an amusing storyteller who pokes fun at himself and writes with brutal honesty about his life, especially his childhood. And what a story!"

Los Angeles Times:
“Immensely likeable…[Lear] isn't always a mensch in "Even This I Get to Experience" (italics, characteristically, his), but at least he can write like one…. In this city, Norman Lear and his post-coaxial contemporaries built a mass medium with their bare hands. On good days — as Lear well recalls, and recalls well — they made it sing. If only more with their talent had lived so long; if only more who live so long had his talent.”

Booklist (starred):
“This is, flat out, one of the best Hollywood memoirs ever written… An absolute treasure.”

Kirkus Reviews (starred):
"A TV titan on his memorable life and storied career. Lear, best known as the creative mind behind such classic comedies as All in the Family, Maude, The Jeffersons and Good Times, recounts his extraordinarily eventful life with his signature wit and irreverence. The result is not just a vividly observed and evocative portrait of a long life, but also a fascinating backstage look at the evolution of the American entertainment industry... Lear writes movingly of his service in World War II, his difficult upbringing and subsequent troubled marriages, and his commitment to liberal causes, evidenced by his founding of the advocacy organization People for the American Way and his purchase of an original copy of the Declaration of Independence. That he makes these subjects as engrossing and entertaining as his Hollywood reminiscences speaks to Lear's mastery of storytelling and humor. A big-hearted, richly detailed chronicle of comedy, commitment and a long life lived fully."

Publishers Weekly:
“[A] feisty, thoughtful autobiography… Lear pens sharply observed studies of the creative process on his many iconic productions and bares plenty of raucous, sometimes bawdy anecdotes—readers get to experience a nude and lewd Jerry Lewis…  [I]n keeping with the bigoted, mouthy, complex and loveable characters he created, Lear's knack for sizing up a flawed humanity makes for an absorbing read.”

President William J. Clinton
“That Norman Lear can find humor in life’s darkest moments is no surprise—it’s the reason he’s been so successful throughout his more than nine decades on earth, and why Americans have relied on his wit and wisdom for more than six. It’s also why EVEN THIS I GET TO EXPERIENCE is such a great read.”

Carl Reiner
“Norman Lear could never write a more dramatic, touching, or funnier tale of his life than he’s done here in EVEN THIS I GET TO EXPERIENCE.”

Bill Moyers
“Many have known the Man behind the stories. Now all of us can know the stories behind the Man. Archie, Edith, Gloria, and Meathead couldn’t have told them better!”

Arianna Huffington
“EVEN THIS I GET TO EXPERIENCE is not just the brilliant, moving story of a man who has lived an amazing number of lives—from making it onto Richard Nixon’s ‘Enemies List’ to changing the face of television—but also a life manual on how to live a life of depth, purpose, and meaning.”

will.i.am
“Norman Lear is a hero and a friend . . . he experienced so much in his life . . . sometimes I just want to sit down and ask him questions about life and his perspective . . . to do it right it would take years of interviews . . . but now that he wrote this book I can experience his journey and wisdom over and over again.”

Trey Parker
“Fantastic stories from one of the wisest, most subversive, and most beautiful human beings the comedy world has ever known. Like the man himself, this book is charming, awe-inspiring, and hilarious.”
Read More