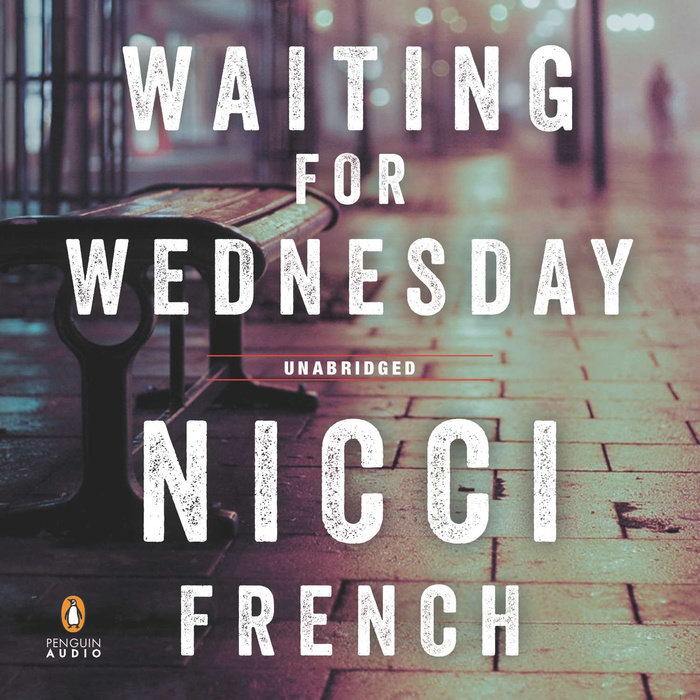 Nicci French’s Blue Monday and Tuesday’s Gone introduced the brilliant yet reclusive psychotherapist Frieda Klein to widespread critical acclaim, but Waiting for Wednesday promises to be her most haunting case yet.

Ruth Lennox, housewife and mother of three, is found dead in a pool of her own blood. Detective Chief Inspector Karlsson can’t piece together a motive and calls in Frieda, hoping her talents will offer a new angle on the case.

When it emerges that the mother was hiding a scandalous secret, her family closes ranks. Frieda herself is distracted, still reeling from an attempt on her life, and struggling with her own rare feelings of vulnerability. Then a patient’s chance remark sends Frieda down a dangerous path that seems to lead to a serial killer who’s long escaped detection. Is Frieda getting closer to unraveling either case? Or is she just the victim of her own paranoid, fragile mind? Because, as Frieda knows, every step closer to a killer is one more step into a darkness from which there may be no return . . .

Flawlessly executed, Waiting for Wednesday is a penetrating, twisted novel of murder and neurosis with a jaw-dropping climax that will linger in readers’ minds long after they have turned the last page.
Read More
Praise for WAITING FOR WEDNESDAY:

"There’s enough backstory for this third Frieda Klein mystery to stand alone, but the greatest pleasure is in following the series from the beginning to see the evolution of Klein, a detective of the mind, who endures a rough patch here but makes it through the darkness. Another
compelling entry in this complex, suspenseful series."—Booklist (Starred review)

"Demanding the reader’s full attention, this richly detailed and intricate thriller weaves the story of Frieda’s life, past and present, into a compelling and suspenseful story. Fans of Elizabeth George will appreciate French’s attention to subtlety and detail."—Library Journal (Starred review)

“As a protagonist, Frieda Klein breaks all the rules.... Grounding Klein’s complicated character is the authors’ sublime prose. The Thames is so real we can smell its stink; the dark city streets so vividly evoked we can see steam rising off the pavement after a rain. This is top-notch writing, sensual, deep, and wise.”—Mystery Scene

"Not only is the plot of this story intricately woven by this husband and wife team of writers, but the ending is one that will leave you gasping for breath!"—Suspense Magazine

“Another fabulous installment... Husband and wife Nicci Gerard and Sean French excel at creating rich and complicated characters... Plus the series just keeps getting better and better!”—No More Grumpy Bookseller

"Seamlessly mixes a foreboding tone and deliberate pacing with deft plot twists that should leave readers pleasantly chilled to the bone."
—Publishers Weekly

"Starts as a grim psychological thriller in the vein of Dennis Lehane’s darker novels and turns into a fascinating puzzle in which character analysis holds sway. Highly recommended for fans of psychological suspense who enjoy a complex protagonist."
—Library Journal (starred review)

"The plotting is fast-paced with surprises galore, and characters literally come to life on the pages. . . . When readers are through, they will find themselves waiting impatiently for Wednesday to arrive!"
—Suspense Magazine

"If you are looking for wickedly inventive crime fiction, you need look no further than the writing team of Nicci Gerrard and Sean French . . . Unless you are into tension, paranoia and burning the midnight oil to finish a book, don’t embark on reading Tuesday’s Gone after suppertime!"
—BookPage

"Tuesday’s Gone is one of those great, great books in the mystery genre wherein the more you know, the less you know—peel back one stratum and you cannot shovel fast enough to get into the next, which reveals anything but what you expected. French takes the novel on a number of unexpected twists and turns, not the least of which relates back to Blue Monday, which, as it turns out, didn’t quite end on its last page."
—Bookreporter.com

“Fast-paced and spooky…it leaves readers with the promise of intriguing tales to come.”
—People (****)

“A neat puzzle with a satisfying resolution and a terrific twist at the end.”
—The New York Times Book Review

“A superb psychological thriller . . . With its brooding atmosphere, sustained suspense, last-minute plot twist, and memorable cast of characters, this series debut will leave readers eager to discover what color Tuesday will be.”
—Publishers Weekly, starred review

“With its smart plot, crisp prose, and a stunning final twist, this is psychological suspense at its best. Absolutely riveting.”
—Booklist, starred review

“This is psychological suspense done right. The authors pace themselves and build the tension slowly while carefully developing each of the players. For fans of Tana French’s and Lisa Gardner’s moody, dark, twisty thrillers.”
—Library Journal

“Complex and flawed, Frieda Klein is a refreshingly human protagonist, an intriguing debut for a truly unique character.”
—Tami Hoag, bestselling author of Down the Darkest Road

“Unrelenting . . . unnerving . . .  unforgettable. Psychological dynamite.”
—Alan Bradley, bestselling author of The Sweetness at the Bottom of the Pie

“Nicci French creates a haunting and complex psychological puzzle about memory and heredity, with enough twists and turns to keep you guessing until the very end.  This gripping thriller certainly bodes well for the future of the series and I look forward to reading more about unlikely heroine Frieda Klein.”
—Camilla Läckberg, bestselling author of The Ice Princess

“A fabulous, unsettling, and riveting look at motives and memory and relationships. And what drives people to do the unthinkable.”
—Louise Penny, bestselling author of A Trick of the Light