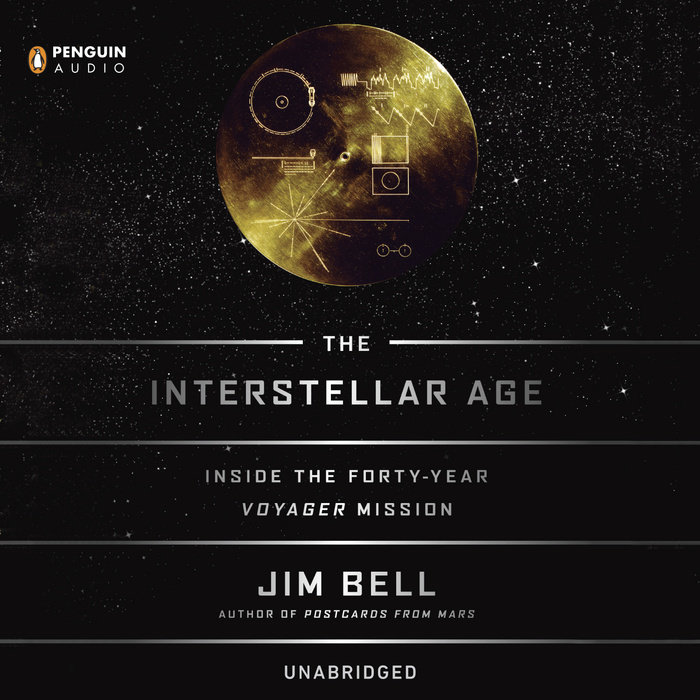 Written by: Jim Bell
Read by: Jim Bell
7 Hours and 45 Minutes Imprint: Penguin Audio Genre: Science - Space Science - Astronomy Release Date: February 24, 2015
Amazon Best of the Year
The story of the men and women who drove the Voyager spacecraft mission— told by a scientist who was there from the beginning.

The Voyager spacecraft are our farthest-flung emissaries—11.3 billion miles away from the crew who built and still operate them, decades since their launch.

Voyager 1 left the solar system in 2012; its sister craft, Voyager 2, will do so in 2015. The fantastic journey began in 1977, before the first episode of Cosmos aired. The mission was planned as a grand tour beyond the moon; beyond Mars, Jupiter, and Saturn; and maybe even into interstellar space. The fact that it actually happened makes this humanity’s greatest space mission.

In The Interstellar Age, award-winning planetary scientist Jim Bell reveals what drove and continues to drive the members of this extraordinary team, including Ed Stone, Voyager’s chief scientist and the one-time head of NASA’s Jet Propulsion Lab; Charley Kohlhase, an orbital dynamics engineer who helped to design many of the critical slingshot maneuvers around planets that enabled the Voyagers to travel so far;  and the geologist whose Earth-bound experience would prove of little help in interpreting the strange new landscapes revealed in the Voyagers’ astoundingly clear images of moons and planets.

Speeding through space at a mind-bending eleven miles a second, Voyager 1 is now beyond our solar system's planets. It carries with it artifacts of human civilization. By the time Voyager passes its first star in about 40,000 years, the gold record on the spacecraft, containing various music and images including Chuck Berry’s “Johnny B. Goode,” will still be playable.
Read More
Praise for Postcards from Mars


"Postcards From Mars is a masterpiece. It promises the future for all of us."
—Ray Bradbury, author of The Martian Chronicles and Fahrenheit 451

"This superbly produced set of photographs is a spine-tingling preview of the dramatic landscape that future humans will one day explore in person. Jim Bell has put together a beautiful, inspiring, and powerful book."
—Dr. Buzz Aldrin, one of the two astronauts aboard the Apollo 11 lunar module,
the first manned mission to land on the Moon


"Bell's informed, impassioned impressions of Mars enhance the vicarious thrill of this unique travelogue. For an armchair space traveler, here is a fantasy realized."
—Dava Sobel, author of Longitude, Galileo's Daughter, and The Planets

“Jim Bell has compiled a book of photos that puts our neighboring planet in sharp focus.”  —USA Today

“[Bell] tells the story of preparing the spacecraft for launch and of the rovers’ arrival on Mars in a conversational tone, with just the right mix of detail and personal point of view. . . . The quality of the printing is high, reproducing intense colors, dramatic shadows, and fine details.”
—The Planetary Society

“The quality and volume of photos coming back from Spirit and Opportunity far exceeds anything that has come back from Mars before.”  —American Photo

“The craters, dunes and sandy ripples [the rovers] depict are both stunning and eerily —familiar. . . . Bell takes readers through the mission’s highs and lows, but it is the glimpses of the rovers’ own tracks and long shadows that remind us how special this moment is.”  —ForbesLife

“[A] stunning portfolio of robotic snapshots that capture the red planet in all its desolate beauty.”  —Entertainment Weekly

Postcards from Mars is a coffee-table book of fabulous photos that also includes the compelling human story behind the successful Spirit and Opportunity rovers. . . . Postcards from Mars is a handsome gift book, and an excellent tool to jumpstart imaginative trips to Mars and discussions of space exploration and settlement with family, friends, and coworkers. Highly recommended.”  —National Space Society