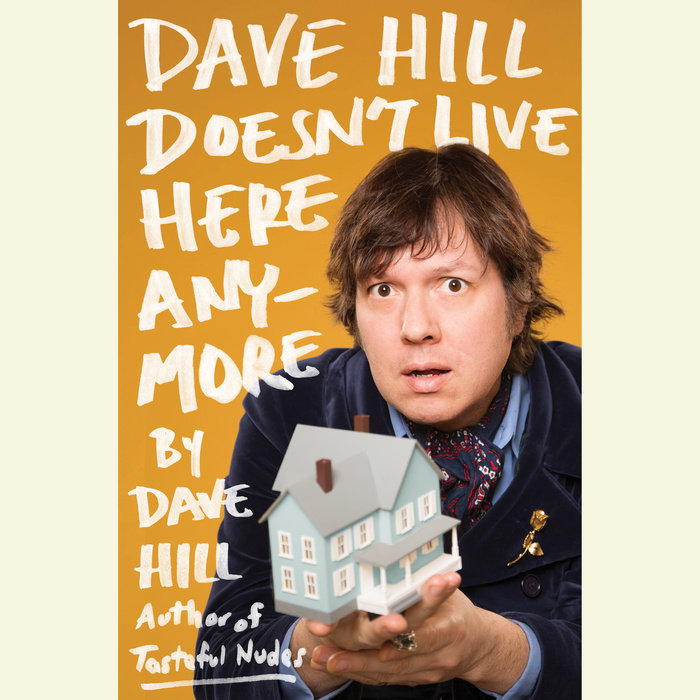 Written by: Dave Hill
Read by: Dave Hill
6 Hours and 40 Minutes Imprint: Penguin Audio Genre: Humor - Form - Essays Release Date: May 10, 2016
With his signature matter-of-fact humor, comedian and musician Dave Hill explores his increasingly close relationship with his recently widowed father in a series of painfully funny essays you will want to read again and again by the fire, at the beach, in a truck stop men’s room, or just about anywhere. It’s your call, really.

These days, Dave has just the right amount of spare time to write books at home, preferably in his underwear, but things weren’t always perfect. When he found himself pushing thirty while still living with his parents in Cleveland, unsuited for anything but what an “employment expert” vaguely called a career in “art, music, writing, or entertainment,” he decided to visit some friends in New York for the weekend and never left. However, getting his life together wasn’t as easy as he’d hoped, and even an illegally subletted, rent controlled fifth-floor walk-up studio apartment with a (for the most part) working toilet wasn’t glamorous enough to erase the fact that his four siblings were all married with steady jobs and actual human offspring. And in recent years, Dave’s father had grown tired of loaning him cash and living alone in the empty family home, neither of which made much sense to Dave, but whatever.

Through the process of his father’s eventual move to a retirement community, Dave and his dad bonded over the things in life that really matter: scorching-hot rock jams, the gluten allergy craze, eighteen-wheelers, Italian food (pizza and spaghetti), and whatever else could possibly be left after that. Meanwhile, Dave discovered his late-blooming manhood via experiences as disparate and dangerous as a visit to a remote Mexican prison, where he learned that people everywhere love the Eagles, and a martial arts class that pushed his resolve and his groin to their limit. In Dave Hill Doesn’t Live Here Anymore, Hill’s voice is sharp, carefree, laced with just the right amount of profanity, and he is—seemingly despite himself—deeply empathetic as he portrays a difficult time in his family’s life and grows up just enough to realize that maybe he and his dad aren’t so different after all.
Read More
“There’s a tender thread running through [this] collection…But it’s Hill’s impressive comedic storytelling that remains center-stage here. He is a master of the self-knowing, self-deprecating kinds of narratives John Hodgman or Tina Fey might spin.”
—Ellen B. Konek, Commonweal

“Don’t write off Dave Hill’s Dave Hill Doesn’t Live Here as just part of a trend. The comedian and rocker delves deeper than the usual anecdotes about odd jobs and backstage shenanigans to deliver thoughtful observations about his close relationship with his father.”
—Vulture.com

“Hill, rest assured, has the enviable ability to get the peculiarities of his personality across using the written word. The personality that animates every page of his book is that of the lovable slacker, the neér-do-well creative type who fully intertwines both his passion for the artistic life with his desire to have as little responsibility as humanly possible….He will charm you with a beguiling mix of delusional bravado and self-effacing frankness.”
—Splitsider.com

“If the rest of this book is as good as that one part I read, I suggest you devour it in one or two sittings.”
—Todd Barry

“Just when you think Dave Hill is going to take the easy way out and comment soberly on the human condition, he makes a fart joke and stands up courageously for heavy metal.”
—Malcolm Gladwell

“Dave Hill Doesn’t Live Here Anymore was delicious. No, I didn’t eat it. I just licked it a bunch.”
—Jim Gaffigan

“Dave Hill is a world-famous rock and roll style icon, or at least that’s what he’ll tell you if you ask him. However, ifyou read his thoroughly hilarious Dave Hill Doesn’t Live Here Anymore, you’ll find that he’s also a warm and witty storyteller.”
—Andy Richter

“For those who look to everything Dave Hill wears with eager expectation, be aware that this long overdue collection of essays does not have any photos. It does not list his current address or contact number. But I have seen Dave wandering around lower Manhattan and he looks really witty and engaging.”
—Janeane Garofalo

“I won’t cheapen the greatness of Dave Hill by calling him a ‘messed-up dude’ or a ‘lovable fuck-up.’ Those terms have been dumbed down and monetized by the Hollywood power brokers for years. No, Dave Hill is the real deal, and his book is one of the smartest, funniest, most original collections of fucked-up-guy essays I’ve ever read. Plus, it’s incredibly moving. In other words, save your phone call, Hollywood. Dave Hill doesn’t want your money. This man’s an artist.”
—Adam Resnick

“The next president’s first official act should be to declare Dave Hill a living national treasure. He is a major figure among American comic writers, past and present. When reading his stuff, I laugh so loud, the neighbors complain.”
—Dick Cavett

“Dave Hill paints a self-portrait of a maddeningly irritating slacker, but what keeps you from wanting to wring his neck are the many moments of profound insight and beauty. Dave Hill Doesn’t Live Here Anymore is damn funny and he mentions the band Foghat. What could be better?”
—Laraine Newman

“In recent years Dave Hill has lost several friends to gluten, and in this new tell-all he opens up about that and other tragedies. Dave Hill Doesn’t Live Here Anymore is very sad. Oh, wait! No. It’s completely insane and hilarious.”
—Simon Doonan

“Dave Hill’s new collection of essays proves he’s one of today’s most skilled purveyors of walking the line between hilarious and heartbreaking.”
—Kelly Oxford

“Dave Hill is truly one of the funniest writers around. I know he wants to be considered one of the sexiest, but that’s not my area of expertise. I promise this book will really make you laugh, and for most of us, that’s much less complicated than sex.”
—Tom Papa
Read More

This Is The Author | Dave Hill