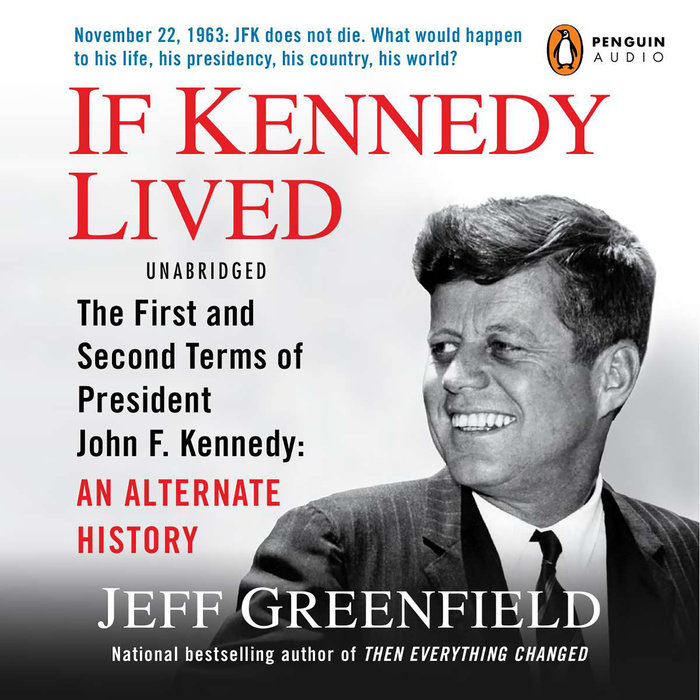 Written by: Jeff Greenfield
Read by: Tom Stechschulte
Introduction by: Jeff Greenfield
8 Hours and 15 Minutes Imprint: Penguin Audio Genre: Political Science - History & Theory Release Date: October 22, 2013
From one of the country’s most brilliant political commentators, the bestselling author of Then Everything Changed, an extraordinary, thought-provoking look at Kennedy’s presidency—after November 22, 1963.

November 22, 1963: JFK does not die. What would happen to his life, his presidency, his country, his world?

In Then Everything Changed, Jeff Greenfield created an “utterly compelling” (Joe Klein), “riveting” (The New York Times), “eye-opening” (Peggy Noonan), “captivating” (Doris Kearns Goodwin) exploration of three modern alternate histories, “with the kind of political insight and imagination only he possesses” (David Gregory). Based on memoirs, histories, oral histories, fresh reporting, and his own knowledge of the players, the book looked at the tiny hinges of history—and the extraordinary changes that would have resulted if they had gone another way.

Now he presents his most compelling narrative of all about the historical event that has riveted us for fifty years. What if Kennedy were not killed that fateful day? What would the 1964 campaign have looked like? Would changes have been made to the ticket? How would Kennedy, in his second term, have approached Vietnam, civil rights, the Cold War? With Hoover as an enemy, would his indiscreet private life finally have become public? Would his health issues have become so severe as to literally cripple his presidency? And what small turns of fate in the days and years before Dallas might have kept him from ever reaching the White House in the first place?

As with Then Everything Changed, the answers Greenfield provides and the scenarios he develops are startlingly realistic, rich in detail, shocking in their projections, but always deeply, remarkably plausible. It is a tour de force of American political history.
Read More
Praise for If Kennedy Lived

“It can be an enlightening exercise to challenge the belief that what happened had to happen.  Usually it didn’t.  In his diverting If Kennedy Lived, Greenfield, the veteran political commentator, asks how things might have played out had John F. Kennedy survived in Dallas.”—The New York Times Book Review

“On the 50th anniversary of JFK's assassination, this is the book to read. An intelligent, often haunting book about what America and the world would have looked like if John Kennedy had lived . . . It's a clever, moving book.”—Fareed Zakaria

“Greenfield grounds his fictional history in research and interviews with some of the era’s experts and, as in his previous excursion into alternative history, offers an ending that the reader will not see coming . . . Kennedy-era followers will enjoy this book.”—Library Journal

“Greenfield does good service in demythologizing JFK to suggest that, had he indeed lived, his second term might have been marked by scandal and controversy, a Camelot undone by the president’s own proclivities as much as by the events of the time. . . . Well researched and thought through—an interesting, plausible exercise in pop history.”—Kirkus Reviews

“Shrewdly written, often riveting, gripping…Thanks to Mr. Greenfield’s own familiarity with American politics and a lot of energetic research, he turns these twists of fate into accelerating historical snowballs that rumble through our recent history, altering the social landscape in ways both small and large.”—Michiko Kakutani, The New York Times

“Not only thoughtful and sophisticated, but marked by the author’s enthusiasm. Greenfield is having fun here, and you can feel it on every page. His scenarios are relentlessly grounded in plausibility. This is a book political junkies will adore.”—Bryan Burrough, The Washington Post

“Satisfying, entertaining, insightful. The key to Greenfield’s success is that he knows his politics and the strengths and weaknesses of leaders. Greenfield’s storytelling is compelling and his research superb.”—The Miami Herald

“Historians have long been tantalized by the what-ifs of history. In the hands of this tremendously gifted storyteller, Then Everything Changed will captivate the reader every step along the way.”—Doris Kearns Goodwin

“You expect intelligence and a devilish sense of humor and a profound knowledge of political history from Jeff Greenfield. But there is a deeper, haunting quality to this book as well. By adding a simple twist of fate, Greenfield brings fresh – and exhilarating – insights to the history of our times.”—Joe Klein, columnist, Time magazine

“Jeff Greenfield has taken the ‘what-if’ game and turned it into something else entirely – a trio of thought-provoking, interesting, and downright clever scenarios that remind us just how much individuals do matter.”—Bob Schieffer, moderator, Face the Nation
Read More