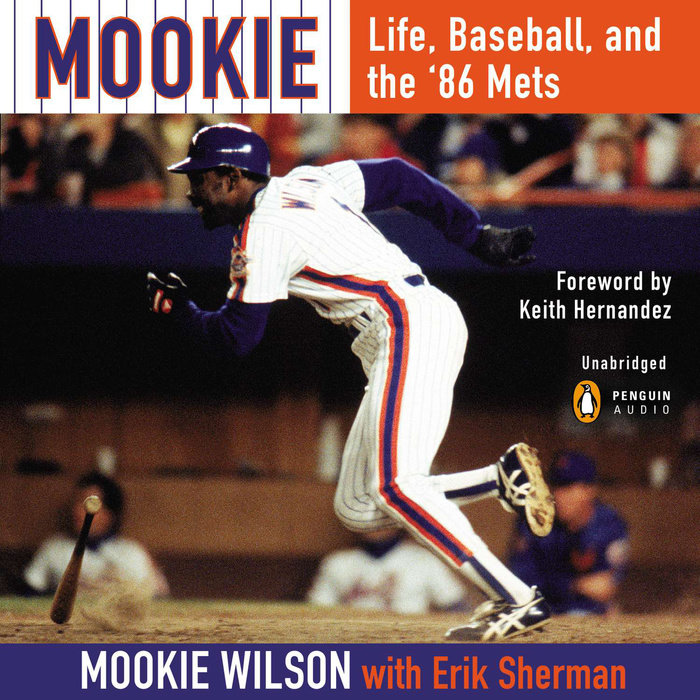 Written by: Mookie Wilson & Erik Sherman
Read by: Ruffin Prentiss
Foreword by: Keith Hernandez
7 Hours and 33 Minutes Imprint: Penguin Audio Genre: Biography & Autobiography - Sports Release Date: April 29, 2014
They said it was the “Curse of the Bambino.” They said “the bad guys won.” Now one of baseball’s all-time good guys, New York Mets legend Mookie Wilson, tells his side of the story—from the ground ball through Bill Buckner’s legs that capped the miraculous 1986 World Series Game Six rally against the Boston Red Sox to the rise and fall of a team that boasted such outsize personalities as Darryl Strawberry, Keith Hernandez, Dwight Gooden, Gary Carter, Lenny Dykstra, and Davey Johnson.

Growing up in rural South Carolina in the 1960s, Mookie took to heart the lessons of his father, a diligent sharecropper who believed in the abiding power of faith—and taught his son the game that would change his life.

When Mookie landed in Shea Stadium in 1980, the Mets were a perennial cellar-dweller overshadowed by the crosstown Yankees. But inspired by Mookie’s legendary hustle, they would soon become the toast of New York. And even when their off-field antics—made famous by a contingency of the team called “the Scum Bunch”—eclipsed their on-field successes, Mookie stayed above the fray.

In 1986, the Mets were a juggernaut, winning 108 games during the regular season and edging the Houston Astros for the National League pennant following a grueling 16-inning Game Six classic. In the World Series against Boston, in an epic at-bat that led to the Buckner error, Mookie would ignite a fire under the Mets, helping to force a Game Seven. New York would win to become World Champions.

In an era when role models in sports were hard to come by, some tarnished by their own hubris and greed, Mookie Wilson remained the exception: a man of humility and honor when it mattered the most.

WITH A FOREWARD BY KEITH HERNANDEZ
Read More
“Mookie Wilson is one of the most beloved figures in more than a half-century of Mets’ baseball.  Now he has established himself as one of the foremost chroniclers of a baseball life.  Mookie’s relentlessly honest portrayal of his career and the unforgettable 1986 World Series Champions further elevates his status as a Mets icon.”—Gary Cohen, New York Mets’ broadcaster, SportsNet New York

"Mookie Wilson is a legendary Met—both on the field and off. Here, in rich detail and color, is what it's like to be a New York baseball icon. A wonderful book."—Jeff Pearlman, New York Times Bestselling Author of The Bad Guys Won!

"We all tend to think of William Hayward Wilson not just as "Mookie," but as "good old Mookie" for his effervescent persona and demeanor. In fact, Mookie is really, really good, and not nearly old, but this thoughtful, compelling book will show you a side of this all time Mets favorite that might surprise you. His candor and honesty will undoubtedly deepen your respect and admiration for a man who is about so much more than a ground ball to first base."—Howie Rose, New York Mets broadcaster

“Mookie is a classy and compassionate person. Because he had feelings and respect for me as a player, I never wanted him to feel guilty about ‘the play.’ Instead, I wanted him to enjoy and appreciate the accomplishment of being on a World Championship team.”—Bill Buckner, member of the 1986 American League Champion Boston Red Sox, 22-year Major League veteran, and 1980 National League Batting Champion

“There's nobody that I thought more highly of than Mookie Wilson on that '86 Mets team. He was respected, funny, honest, and just as solid a citizen as anyone I've ever known.”—Tim McCarver, Longtime Major Leaguer and Broadcaster, Recipient of the 2012 Ford C. Frick Award

“One of my favorite teammates—a class act, an even better person than the great ballplayer he was. Mookie was the moral rudder wherever he went.”—Ron Darling, Former All Star Pitcher and Member of the 1986 World Champion Mets, Current SNY and TBS Color Analyst

“All the clichés you hear about Mookie are true. On a team of ‘out there’ characters, Mookie was mature and wise beyond his years. In a selfish, me-first business, Mookie was a great mentor and legitimately cared for others.”—Bobby Ojeda, Member of the 1986 World Champion Mets, Current SNY Studio Baseball Analyst

“Mookie is, in a nutshell, an awesome man of God both inside and outside the church.  His spirit of giving and his spirit of caring are an inspiration. His life speaks for him.”—Bishop Wendell B. Sumter, Pastor, Zion Mill Creek Baptist Church Columbia, South Carolina
Read More 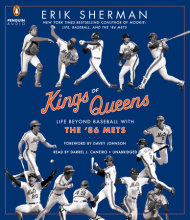