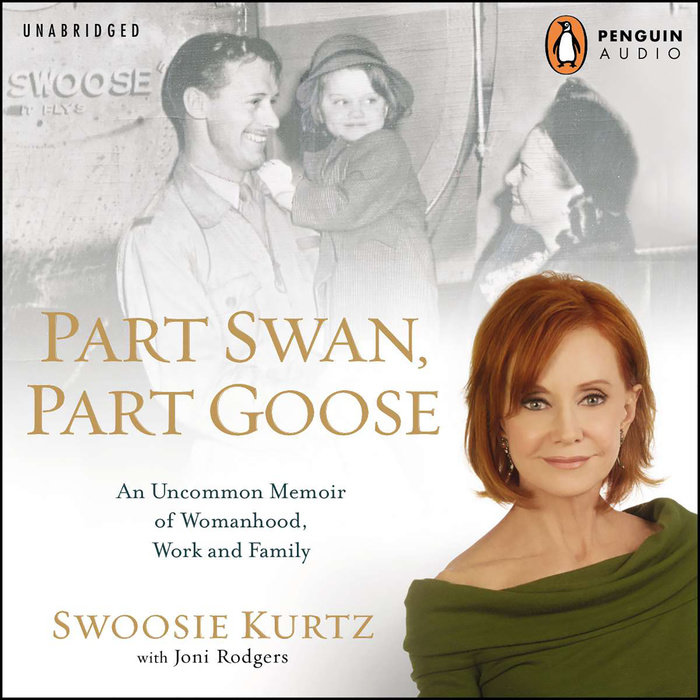 In a wise, warmhearted memoir that celebrates her extraordinary life and stellar career, Swoosie Kurtz shares just the right combination of personal misadventure and showbiz lore, candidly reflecting on the right choices that empowered her, the wrong choices that enlightened her, and the intimate journey of caring for an aging parent.

Animating this remarkable memoir is Swoosie’s relationship with her equally remarkable parents. Her father, Frank, was an Olympic athlete and highly decorated World War II airman. He flew a record number of missions in a cobbled-together B-17D called the Swoose. Her mother, Margo, was the quintessential military wife but with the spunk and will to match her husband’s. Her 1945 memoir, My Rival, the Sky, chronicled their lives up to the time of the birth of their daughter.

Today, Margo, who is fast approaching her hundredth birthday, lives with Swoosie. And Swoosie’s life has become a precarious and precious balancing act as she struggles to stay ahead of her mother’s increasing needs while navigating a showbiz career that keeps one foot in Hollywood and the other on Broadway.


**Includes a PDF of a digital photo gallery

“Inimitable…one of the best comic actors of our time.” —USA Today

“[An] expert comic actress…may just be the most seductive woman on the New York stage right now.” —Charles Isherwood, The New York Times

and “full of surprises…expressive…devastating…unforgettable.” —Ben Brantley, The New York Times
Read More
“Part Swan, Part Goose is a brave and riveting book about family, fame, theater and life. It is witty, wise and irresistible. I loved it."
—Tom Brokaw

"I'm often asked, ‘What's Swoosie Kurtz really like?’ I say, warm, incredibly funny, grounded but spontaneous, irreverent but always kind, independent yet deeply rooted to her family.  Swoosie has put her heart and her humor into these pages. Now when people ask, I can say, ‘Here, read this!’”
—Melissa McCarthy

“Swoosie and her family have always been special to me.  When you read this book, you will understand why.”
—Warren Buffett

“I laughed and cried (sometimes at the same time) reading this extraordinary story about Swoosie and her parents and her work and her loves. Swoosie has the beautiful gift of a seasoned story teller. Her observations about love and loss had me dog-earing several pages to re-read again and again. I feel blessed to know her.”
—Carol Burnett

"The Tony Award-winning actress certainly relates a lot of great anecdotes from her long career on the Broadway stage, in films and on such popular TV shows as “Sisters,” “Pushing Daisies” and her current hit, “Mike & Molly.” Yet, her book, co-authored by writer Joni Rodgers, is also a remarkable journal about Kurtz’s extremely close relationship with her parents, and is a compelling saga about her recent journey as a loving caregiver for her mother as she’s slipped into depths of dementia."
—Chicago Sun Times

“I thought I’d browse (Part Swan, Part Goose) and write a quick column. I couldn’t browse. Swoosie kept dragging me in with another anecdote, and she writes in a freewheeling style that’s almost like free-associating at times. One topic leads to another, facts are told out of chronological order, and yet it all makes perfect sense. People talk this way, and her voice is in the telling.
“I’ve always been a fan of Swoosie Kurtz the actress …Now I’m a fan of Swoosie Kurtz the human being as well. Her streak of Midwestern work ethic is so familiar. And the piece of her heart left on the pages is impossible not to love.”
--Bob Fischbach, Omaha World-Herald

“Comedic timing always has been Kurtz’s hallmark and in “Part Swan, Part Goose,” she proves she can write a line as humorously as she can deliver one. The book crackles with wit. The book lists Joni Rodgers as a co-author, but the candor, clever turns-of-phrase and hilarity seem very Kurtz-like.” – The Buffalo News

“Part Swan, Part Goose: An Uncommon Memoir of Womanhood, Work and Family is indeed uncommon. Unlike some show business memoirs, it’s neither a scandalous tell-all, nor an exercise in self-aggrandizement. Instead, it’s a candid, engaging look at Kurtz’s life and work, and especially her relationship with the two most important people in her life: her parents, Frank and Margo Kurtz.”--Trudy Ring, SheWired

“Don't miss this....book of collected praise for parents who had it all together. And never miss seeing Swoosie, with whom you will inevitably feel a kinship -- on stage, screen or TV. There is not a saccharine note in this delightful memoir.” – Liz Smith