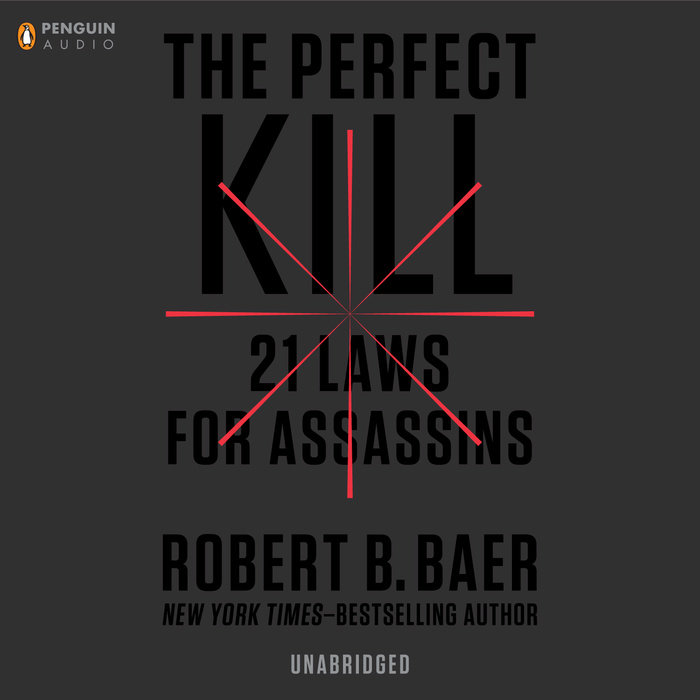 Written by: Robert B. Baer
Read by: Keith Szarabajka
10 Hours and 2 Minutes Imprint: Penguin Audio Genre: Biography & Autobiography - Military Release Date: October 28, 2014
What is the definition of assassination? Robert B. Baer’s boss at the CIA once told him, “It’s a bullet with a man’s name on it.” Sometimes assassination is the senseless act of a psychotic, a bloodletting without social value. Other times, it can be the sanest and most humane way to change the course of conflict—one bullet, one death, case closed. Assassination has been dramatized by literature and politicized by infamous murders throughout history, and for Robert Baer, one of the most accomplished agents to ever work for the CIA, it’s a source of endless fascination, speculation, and intrigue.

Over several decades, Baer served as an operative, from Iraq to New Delhi and beyond; notably, his career was the model for the acclaimed movie Syriana. In The Perfect Kill, he takes us on a serpentine adventure through the history of political murder; its connections to, and differences from, the ubiquitous use of drones in state-sponsored killing; his firsthand experience with political executions; and his decades-long cat-and-mouse hunt, across the Middle East and Europe, for the most effective and deadliest assassin of the modern age. A true maverick with an undeniably captivating personal story, Baer pulls back the curtain on the underbelly of world politics and the quiet murderers who operate on the fringe of our society.
Read More
“A best-selling author and former CIA operative chronicles his experiences as an assassin while offering chilling insight into the fine art of political murder… Fascinating reading from an expert.”—Kirkus

“Exposes a niche of the spy world that we are all aware of but know little about: assassination. The Perfect Kill is 310 pages of cold calculations, intriguing ethical debates and eyebrow-raising scenes, with Middle East history sprinkled throughout.”—Washington Post

“A fascinating, up-close look at the hunt for Radwan, and it’s packed with intriguing contemporary and historical details on the assassinations of tyrants.”—Booklist

“A thrilling read from start to finish. [Baer] has a narrative voice that is concise, informative and though he occasionally drifts toward the conspiratorial (which isn’t a bad thing), he tempers it by clearly defining what is fact and what is conjecture.”—Ensuing Chapters

“A true maverick with an undeniably captivating personal story, Baer pulls back the curtain on the underbelly of world politics and the quiet murderers who operate on the fringe of our society.”—OccuWorld

Acclaim for The Devil We Know
“A masterpiece…Baer's brilliant analysis of Sunni versus Shia, Arab versus Iranian, and Christian versus Muslim is shocking, revealing, and provocative.  Baer lifts the veil of Western media hype and challenges the simplistic solutions offered by ‘experts’ whose vision is blurred by the past. Through his knowledge, long-term experience, and ability to assess the changing landscape of this vital region, he not only shatters the foundations of conventional thinking, but also offers a practicable blueprint for turning things around.”—John Perkins, author of the New York Times bestseller Confessions of an Economic Hit Man

“The most important and original book on the Middle East to appear in many years. This is a book McCain and Obama should ponder.”
—Thomas Powers, Pulitzer Prize-winning author of The Man Who Kept the Secrets and Intelligence Wars

"The Devil We Know, Bob Baer has once again peered into the future and has brought back uncomfortable truths that won't satisfy any partisan. But his book does force us to do something that, unfortunately, doesn't come naturally to the chattering classes. Think.”
—James Risen, Pulitzer Prize-winning author of State of War: The Secret History of the CIA and the Bush Administration

“An important text studded with keen insights into a nation about which America remains dangerously misinformed.”
—Kirkus Reviews

Acclaim for Sleeping With the Devil:

“An unsettling, eye-opening account of our relationship with Saudi Arabia... [Baer] gets our attention.”—Boston Herald

“Details how an administration known for its vigilance on the international scene routinely and inexplicably spins, caves, and hops for the Saudis.”—The Washington Post

Acclaim for The Company We Keep:

"[A] bloody, suspenseful story of love and deceit.”—Mens Journal

“The Company We Keep is a breezy, often fascinating account of this CIA romance, with tradecraft details and war stories thrown in to make it catnip for any fan of espionage fiction...That the Baers coaxed a happy ending out of all this is not the least remarkable part of their appealing story, and hats off to them."—The Washington Post

"The Company We Keep is the best true-life spy story I've ever read…You'll find yourself rooting for these two vagabond spies, and you won't want their exciting and moving story to end."—David Ignatius, New York Times bestselling author of Body of Lies

"Funny, frightening, ironic, and deeply moving, this is an utterly engrossing thrill ride through the hall of mirrors that is modern espionage…A wonderful book."—Richard North Patterson, New York Times bestselling author of Degree of Guilt and In the Name of Honor

"Provides a spot-on and compelling portrait of real life inside the CIA; the periods of boredom and frustration loudly punctuated by fast-moving and sometimes frightening, sometimes amusing intelligence operations.  Bob and Dayna Baer are the real deal and they beautifully capture the murky world they lived and worked in for years."—Valerie Plame Wilson, New York Times bestselling author of Fair Game

“Propulsive momentum…the authors give a good sense of the improvisational nature of the CIA…Both Baers write affectingly of their experiences.”—Kirkus Reviews

"A revelation…[shows] how spies operate in the field, the personal costs they pay for the exceptional lives they live, and the way fate can deliver up redemption…I loved this book."—Barry Eisler, New York Times bestselling author of Rain Fall and Fault Line

"An emotionally candid memoir of a life few could imagine, juggling terrorists and dictators with all too real family dramas…describes how two accomplished spies trained in shooting for the heart, improbably found their own."—Jane Mayer, National Book Award Finalist for The Dark Side

"After 20 years as the CIA's best and most adventurous spy, Bob Baer has established himself as America's go-to writer on espionage and the Middle East in the age of 9/11. Now he and his wife Dayna have added a heart-stopping new chapter, revealing how a couple caught up in the dark world of CIA intrigue try to balance romance and gunplay while building a relationship on the jagged edge of undercover work…The Company We Keep will make you ask, who needs Brad Pitt and Angelina Jolie?"—James Risen, Pulitzer-Prize winning author of State of War

"Extraordinary…shows the Baers’ ultimate triumph over the isolation inherent in their professions and the banality of bureaucracy worldwide."—Lindsay Moran, author of Blowing My Cover: My Life as a CIA Spy
Read More