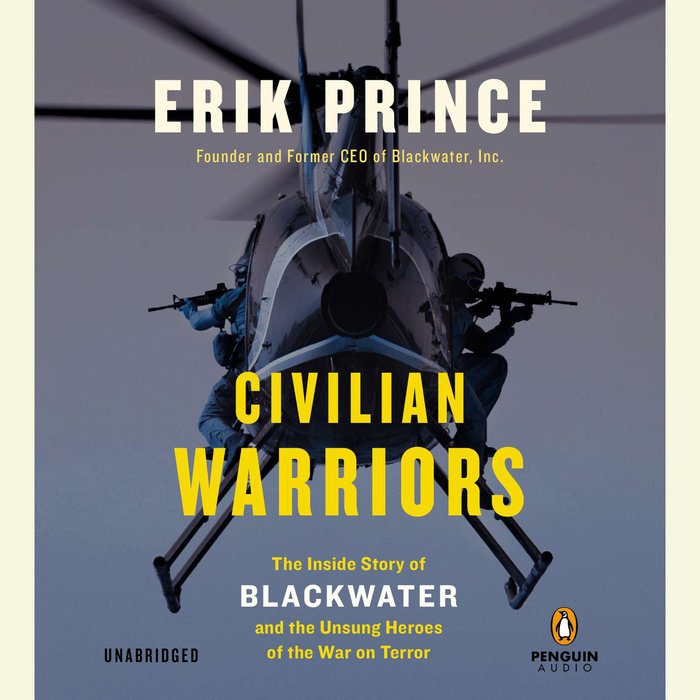 Written by: Erik Prince
Read by: Jeff Gurner
Introduction by: Erik Prince
13 Hours and 13 Minutes Imprint: Penguin Audio Genre: History - Wars & Conflicts - General Release Date: November 18, 2013
The founder of Blackwater offers the gripping, previously untold story of the world’s most controversial military contractor
Blackwater is one of the most misunderstood companies of our time. As Erik Prince, its founder and former CEO, writes:

“Hundreds of American citizens employed by private military contractors, or PMCs, would lose their lives helping our government wage wars in Afghanistan and Iraq, only to have their memory tarnished by the unfair and/or ignorant depiction of PMCs as profiteers, jackbooted thugs, or worse.”

Because of the secrecy requirements of Blackwater’s contracts with the Pentagon, the State Department, and the CIA, Prince was unable to speak out when his company’s opponents spread false information. But now he’s free to tell the often shocking story of Blackwater’s rise and fall.

Blackwater hired Special Forces veterans and others with the skills and courage to take on the riskiest security jobs in the world. As its reputation grew, demand for its services escalated. Its men eventually completed nearly 100,000 missions in Iraq and Afghanistan.

Prince’s narrative includes newly-revealed details about many controversial events. It debunks myths that have been spread by TV shows and movies. It honors our armed forces while challenging the Pentagon’s top leadership. Above all, it will make people rethink exactly who the “good guys” and “bad guys” have been since 9/11.

Read More
“Prince’s book belongs on the shelf next to the memoirs of the other Iraq and Afghanistan war chieftains…. we need Prince’s story to help us understand the history of the post- 9/11 wars and the myriad roles contractors played in these conflicts.”