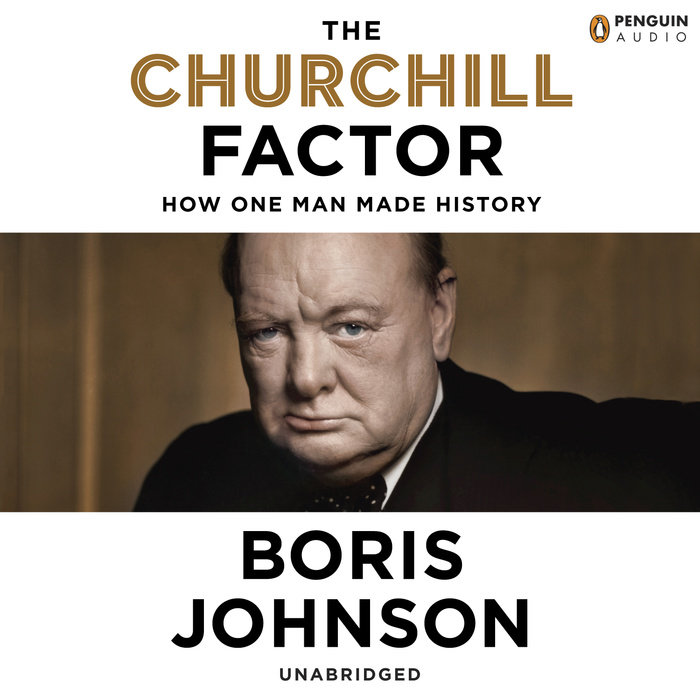 From London’s inimitable mayor, Boris Johnson, the story of how Churchill’s eccentric genius shaped not only his world but our own.

On the fiftieth anniversary of Churchill’s death, Boris Johnson celebrates the singular brilliance of one of the most important leaders of the twentieth century. Taking on the myths and misconceptions along with the outsized reality, he portrays—with characteristic wit and passion—a man of contagious bravery, breathtaking eloquence, matchless strategizing, and deep humanity.

Fearless on the battlefield, Churchill had to be ordered by the king to stay out of action on D-Day; he pioneered aerial bombing and few could match his experience in organizing violence on a colossal scale,  yet he hated war and scorned politicians who had not experienced its horrors. He was the most famous journalist of his time and perhaps the greatest orator of all time, despite a lisp and chronic depression he kept at bay by painting. His maneuvering positioned America for entry into World War II, even as it ushered in England’s post-war decline. His openmindedness made him a trailblazer in health care, education, and social welfare, though he remained incorrigibly politically incorrect. Most of all, he was a rebuttal to the idea that history is the story of vast and impersonal forces; he is proof that one person—intrepid, ingenious, determined—can make all the difference.

“[The Churchill Factor] isn’t another potted biography… [Johnson] clearly admires his subject, and his book has a boyish, innocent quality that is also an essential part of Mr. Johnson’s political appeal.” —The Wall Street Journal

"Fascinating...[Johnson's] interpretation of [Churchill] is interesting on every page." —Freakanomics

“A full-throated celebration of human greatness and perhaps the best (and certainly the funniest)…introduction to Churchill yet written… delightful and effervescent…[Johnson’s] writing crackles with vivid metaphors and similes… [A] rumbustious, hilarious, but altogether sound…tribute to the vast, cathedral-like dimensions of Churchill’s greatness.” —The Daily Beast

“Confessing to a reverence for his subject that has burned since boyhood, the mayor has written a book on Churchill …that may be the most fun… His narrative voice resembles an art gallery docent’s, as he explains vignettes from the prime minister’s life in captivating detail… Mr. Johnson’s voluptuous prose and passionate affection for his subject makes the audience a willing Dante to his Virgil.” —Washington Times

"London Mayor Boris Johnson digs into the character of Winston S. Churchill to develop a fascinating book that lays out what made Churchill tick. In the process, Johnson offers up plenty of anecdotes, some new, most old, but all still lots of fun.” —The Cleveland Plain-Dealer

“[Johnson’s] many ribald, eccentric, action-packed anecdotes bring Churchill to life so vividly, as such an august character, that the reader is enticed to acknowledge, but finally to cast away negative judgments of him… Johnson’s writing is florid and funny, and he truly loves his subject. …[A] great read” —Brooklyn Rail

“Johnson is no buttoned-down academic historian. Like his more famous subject, the mayor has a journalist’s eye for detail and ear for conversational language…his book succeeds in identifying the ways in which Churchill’s personality proved as important as his policies in helping Britain cope with the dark task of winning World War II… it would be hard to read this book and imagine how today’s world could have come into existence without his highly personal stagecraft.”—The Carolina Journal Online

“An interesting study of a truly fascinating historical figure… [Johnson] is a good, sound writer with a very distinct, unique voice…It is as if [he] were sitting with you on a long night in a pub over pints telling you everything he knows and think of Churchill.” —PopMythology

“A characteristically breathless romp through the life and times of our greatest wartime leader, Winston Churchill…as high on entertainment as it is on providing an appraisal of the great man’s achievements…Johnson’s distinctive writing style is unlike any other used in the countless books that have been written on Churchill… It reads at times like a mixture of Monty Python and the Horrible Histories.” —The Telegraph (4 stars)

“Johnson has knocked this project out of the park. With this book Johnson has not only managed to create the most readable non-fiction prose I have read all year, but he has managed to clarify myth, destroy recent revisionism and unearth new material. The book amuses and educates in equal measure with a deftness of touch and lightness of learning that is beyond most people. He has done this while holding down one of the country’s busiest and most high-profile jobs.” —Quadrapheme

"A lively, and pertinent, introduction to [Churchill]… readers…will benefit not only from this book’s wealth of lore and information, but from Johnson’s corrective opinions and analysis.. Journalist, wit, parliamentarian, mayor of London since 2008, Renaissance man, and prospective prime minister, Johnson has painted his portrait of Churchill with light, learning, and good sense, a wise aggregation of present and past.”  —The Weekly Standard

“[The Churchill Factor] is both paean of praise and irreverent romp, with analysis of Churchill's smorgasbord of achievements… Its stress on the importance of political bravery, and doing what is morally right, rather than what the polls and press dictate, is a timeless message.” —The Jewish Chronicle

“Combine[s] bathos with humour and a welcome clarity of historical argument…there is much to commend in this spirited, entertaining tale.” —The Guardian

“A book by Boris Johnson, like almost any book about Winston Churchill, is bound to be interesting. The combination of this author with this subject cannot fail to be a good read—nor does it…a mine of useful vignettes”—The Churchill Centre

"A bravura performance...Johnson has not only celebrated Churchill in this book: he has emulated him with comparable panache." —The Financial Times

“The Churchill Factor would have been a worthy contribution without the political overtones. Like Sir Winston – who somehow published 43 books (and won the 1953 Nobel Prize for Literature) while not busy leading the defeat of Hitler – Mr. Johnson is a superb writer. Despite the heavy subject matter, The Churchill Factor is a light and quick read... [Johnson's] brisk style of writing...helps keep the book moving, challenging readers with occasional get-out-your-dictionary words and rewarding them with the odd belly laugh” —The Globe and Mail

"Like all Johnson's work [The Churchill Factor] is beautifully written, particularly as, in this case, he rises to the linguistic standards set by his subject...it is clear that he not only admires Churchill enormously, but that he was also determined to make a really good job of a timely reassessment on the eve of the 50th anniversary of Churchill's death." —Saga Magazine

"Churchill's own energy - his indefatigable pursuit of excitement, glory, place and power - demands a writer of fizz and passion to do history justice. Johnson is that writer." —Mail on Sunday

“Irresistible…chatty, enthusiastic and as funny as you would expect.” —The Spectator

“Riveting. It would be a fascinating read [even] without the Johnson Factor – [but] Boris is a superb, accessible writer, with an easy, good-humoured touch. … The result is entertaining, informative and teasing.” —The Independent

“While there are many accounts of Winston Churchill and his political savvy, one would be remiss to ignore this sprightly written volume…Johnson’s history of Churchill is well crafted, amply researched, and a pleasure to read.” —Library Journal

"Reading about Churchill is always a delight, and Johnson is an accomplished, accessible writer." —Kirkus Reviews

Praise for Johnson’s Life of London

“Boris Johnson is Britain’s most popular politician. He is also its wittiest—and most erudite. . . . Not since Winston Churchill has a future prime minister of Britain written so well.” —Michael Wolff, Vanity Fair
Read More