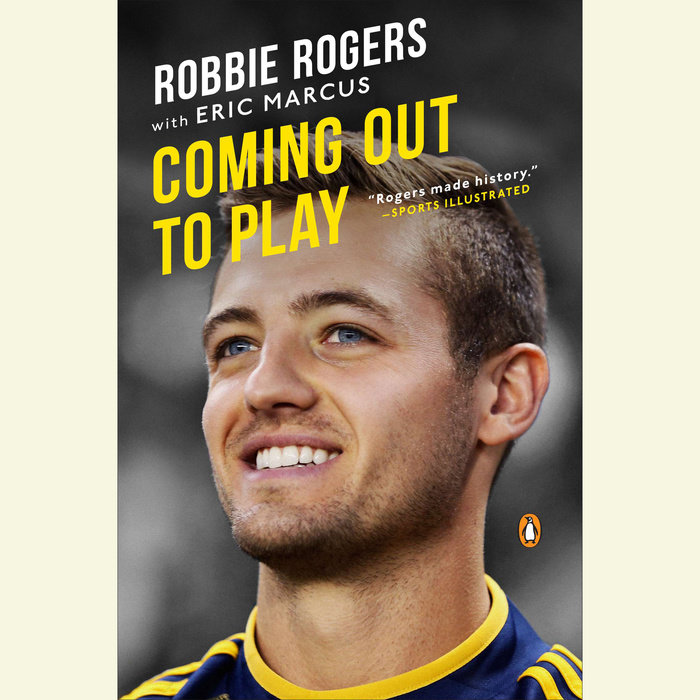 Written by: Robbie Rogers & Eric Marcus
Read by: Robbie Rogers
5 Hours and 1 Minutes Imprint: Penguin Audio Genre: Sports & Recreation - Soccer Release Date: June 16, 2015
The first openly gay professional athlete in North America tells the story of his landmark decision to come out of the closet and how he changed the playing field of professional sports forever.

Robbie Rogers knows better than most that keeping secrets can crush you. But for much of his life Robbie lived in paralyzing fear that sharing his big secret would cost him the love of his family and his career as a professional soccer player. So he never told anyone what was destroying his soul, both on and off the field.

While the world around Robbie was changing with breathtaking speed, he knew that for a gay man playing a professional team sport it might as well be 1958. He could be a professional soccer player.  Or he could be an out gay man. He couldn’t do both.

Then last year, at the age of twenty-five and after nearly stepping away from a brilliant career—one that included an NCAA Championship, winning the MLS Cup, and competing in the Olympics—he chose to tell the truth. But instead of facing the rejection he feared, he was embraced—by his family, by his teammates, and his fans.

In Coming Out to Play, Robbie takes readers on his incredible journey from terrified teenager to a trailblazing out and proud professional soccer player for the L.A. Galaxy, who has embraced his new identity as a role model and champion for those still struggling with the secrets that keep them from living their dreams.
Read More
“Rogers made history… As the first openly gay male to play a game in a major professional team sport in North America, Rogers’ ascension to becoming a pioneer was complete. Rogers’ return was symbolic, poetic and seamless all at the same time.”
Avi Creditor, Sports Illustrated

“By standing up, coming out and continuing to play the sport he loves, Robbie Rogers has inspired millions of people around the world. He has refused to let fear stop him from living and loving and his story will move you as it has me."
Anderson Cooper

"Robbie Rogers is a courageous man who speaks his truth and lives his life in his truth. We all benefit when someone has the courage to tell their story like Robbie has done. Bravo."
Maria Shriver

"Robbie Rogers' story transcends sport; he's an inspiration to his peers and future generations."
Jason Collins, center for the Brooklyn Nets and the first 'out' NBA player

"Robbie Rogers' story is as heroic on the field as it is off."
Mark Cuban, owner of The Dallas Mavericks, Magnolia Pictures and Landmark Theatres

"With courage and honesty, Robbie Rogers has offered us a graceful genuine story about a crucial value in everyone’s life: being true to oneself and to one’s feelings. It’s impossible not to be moved by it."
Giovanni Frazzetto, Neuroscientist and author of Joy, Guilt, Anger, Love: What Neuroscience Can--and Can't--Tell Us About How We Feel

"Valuable insight into the myriad off-field issues that can affect footballers, and the impact they have on their careers... Reading about those tough experiences will be of benefit to many, players and fans alike.""
Sky Sports
“You want courage? Rogers came out. In a male team sports world that had never embraced gay athletes, Rogers announced his orientation.”
Grant Wahl, Sports Illustrated

"Rogers’s debut is great inspiration for people of all ages struggling with shame and grappling with identity issues with regard to sexuality or otherwise. Those who enjoy memoir and stories of people who overcome difficulty will embrace ­this account."
Library Journal

“In one day, instead of representing the past—the idea that the only way a male athlete could come out would be if he also retired—Robbie Rogers will represent the future.”
The Nation

“Rogers is now one of the most recognizable faces in the fight against homophobia.”
CNN

“[Rogers’] status as the only openly gay male athlete in a prominent North American professional sport has made waves.”
The Guardian

“2013 will be remembered as the year Rogers came out as gay, retired from the sport, and returned to become a trailblazer in the sports world.”
Rant Sports