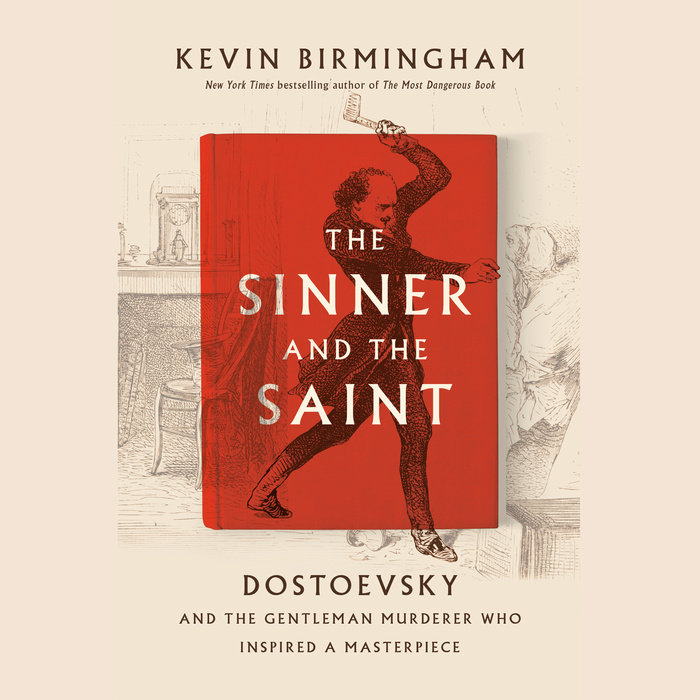 Written by: Kevin Birmingham
Read by: Robert Petkoff
15 Hours and 46 Minutes Imprint: Penguin Audio Genre: History - Russia & The Former Soviet Union Release Date: November 16, 2021
From the New York Times bestselling author of THE MOST DANGEROUS BOOK, the true story behind the creation of another masterpiece of world literature, Fyodor Dostoevsky's CRIME AND PUNISHMENT.

THE SINNER AND THE SAINT is the deeply researched and immersive tale of how Dostoevsky came to write this great murder story—and why it changed the world. As a young man, Dostoevsky was a celebrated writer, but his involvement with the radical politics of his day condemned him to a long Siberian exile. There, he spent years studying the criminals that were his companions. Upon his return to St. Petersburg in the 1860s, he fought his way through gambling addiction, debilitating debt, epilepsy, the deaths of those closest to him, and literary banishment to craft an enduring classic.

The germ of CRIME AND PUNISHMENT came from the sensational story of Pierre François Lacenaire, a notorious murderer who charmed and outraged Paris in the 1830s. Lacenaire was a glamorous egoist who embodied the instincts that lie beneath nihilism, a western-influenced philosophy inspiring a new generation of Russian revolutionaries. Dostoevsky began creating a Russian incarnation of Lacenaire, a character who could demonstrate the errors of radical politics and ideas. His name would be Raskolnikov.

Lacenaire shaped Raskolnikov in profound ways, but the deeper insight, as Birmingham shows, is that Raskolnikov began to merge with Dostoevsky. Dostoevsky was determined to tell a murder story from the murderer's perspective, but his character couldn't be a monster. No. The murderer would be chilling because he wants so desperately to be good.

The writing consumed Dostoevsky. As his debts and the predatory terms of his contract caught up with him, he hired a stenographer to dictate the final chapters in time. Anna Grigorievna became Dostoevsky's first reader and chief critic and changed the way he wrote forever. By the time Dostoevsky finished his great novel, he had fallen in love.

Dostoevsky's great subject was self-consciousness. CRIME AND PUNISHMENT advanced a revolution in artistic thinking and began the greatest phase of Dostoevsky's career. THE SINNER AND THE SAINT now gives us the thrilling and definitive story of that triumph.
Read More
“[An] inspired account of the genesis—philosophical and neurological—of Crime and Punishment . . . Birmingham is superb . . . on the intellectual environment, the vibrational stew.” —James Parker, The Atlantic

“Kevin Birmingham—whose Ulysses history The Most Dangerous Book never got the audience it deserved—returns with The Sinner and the Saint, digging deeply into the true story behind Dostoevsky’s Crime and Punishment.” —Chicago Tribune Fall Book Preview

“The Sinner and the Saint is a gripping murder mystery—a dazzling literary ‘howdunnit' that meticulously reconstructs the political ferment that inspired Dostoevsky’s most famous novel. At the heart of it all is Raskolnikov’s real-life double, a charming gentleman murderer whose trial set Parisian society ablaze.” —Alex Christofi, author of Dostoevsky in Love

“A 19th-century true-crime/literary tale in which two lives become enmeshed in evil. Award-winning literary historian Birmingham elaborates on the trials and travails of Dostoevsky (1821-1881) by interweaving his life with that of notorious French outlaw Pierre Francois Lacenaire . . . Birmingham conveys in vibrant detail Dostoevsky’s literary aspirations, struggles to publish, and tumultuous world of ‘angels and demons.’ Prodigious research enlivens a vigorous reappraisal of the writer’s life.” —Kirkus Reviews (starred)

“Kevin Birmingham’s impressive research combined with a flair for characterising the teeming intellectual debates of the day give absorbing insights into the origins of one of the world’s great novels.” —Sue Prideaux, author of I Am Dynamite! A Life of Friedrich Nietzsche

“I never imagined anyone could make Dostoevsky richer—deeper—knottier—than he already was. But by revealing the secret background behind Crime and Punishment, Kevin Birmingham reveals a depth of thought and feeling that makes this most shocking of novels even more shocking yet. After all, it's easy enough to say what makes a murderer bad. It's far harder to say what makes him good.” —Benjamin Moser, Pulitzer Prize-winning author of Sontag: Her Life and Work

“A page turner about turning pages, The Sinner and the Saint: Dostoevsky and the Gentleman Murderer Who Inspired A Masterpiece not only brings us back into the fevered panic of Raskolnikov as he murders an old woman, his motives a mystery even to his own sputtering mind, but also to real-life characters, most vividly a Parisian dandy (we might now call him ‘gay’), whose nihilism and thrill killings set Dostoevsky’s imagination ticking. Compulsively readable, tautly drawn, and richly researched, here is the brilliant study Dostoevsky and his staggering Crime and Punishment—filled, we now find, with intimations of him—so deserves.” —Brad Gooch, New York Times Bestselling author of Flannery: A Life of Flannery O’Connor

“Dostoevsky didn’t have any choice about misery—the Siberian exile and the epilepsy, the despair and debts and the deaths of those he loved. All that just fell upon him, and none of us would want to be him, not even for the sake of those books.  But wanting to know what it was like to be him—well, that’s different, and I can’t imagine a better guide than Kevin Birmingham. Dostoevsky was both sinner and saint, and this wonderfully pungent book presents his extraordinary life in the most vivid detail imaginable. Birmingham puts you in the room when Raskolnikov brings down the axe; and he puts you there too when the novelist discovers the face of redemptive love.” —Michael Gorra, author of The Saddest Words: William Faulkner’s Civil War

"With The Sinner and the Saint, Kevin Birmingham has scored a hat trick, delivering three biographies in one book—expertly chronicling the lives of the man who wrote Crime and Punishment and the murderer who inspired the tale, and the fascinating evolution of the novel itself. Birmingham’s ingenious braided narrative offers an inspired new reading to those who already know and love Dostoevsky’s masterpiece, and serves as an indispensable guide for first time readers.” —Megan Marshall, Pulitzer Prize-winning author of Margaret Fuller: A New American Life and Elizabeth Bishop: A Miracle for Breakfast


Praise for The Most Dangerous Book:

“The arrival of a significant young nonfiction writer . . . A measured yet bravura performance.” —Dwight Garner, The New York Times

“Birmingham has produced an excellent work of consolidation. . . . [A] lively history. . . . The Most Dangerous Book is impressively researched and especially useful for its meticulous accounts of various legal battles. It is meant to be fun to read and, setting aside my fogeyish cavils, it is.” —Michael Dirda, The Washington Post

“Terrific . . . Birmingham's brilliant study makes you realize how important owning this book, the physical book, has always been to people.” —The New Yorker

“[G]ripping. Like the novel which it takes as its subject, it deserves to be read.” —The Economist
Read More 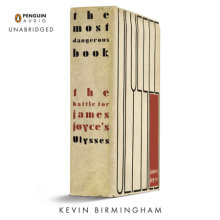