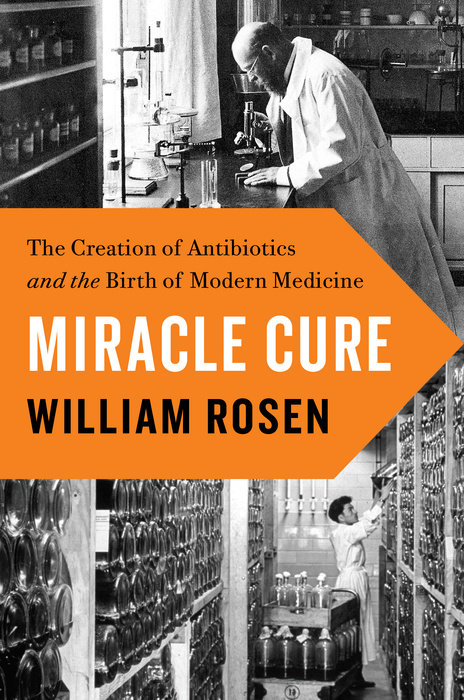 As late as the 1930s, virtually no drug intended for sickness did any good; doctors could set bones, deliver babies, and offer palliative care. That all changed in less than a generation with the discovery and development of a new category of medicine known as antibiotics. By 1955, the age-old evolutionary relationship between humans and microbes had been transformed, trivializing once-deadly infections.

William Rosen captures this revolution with all its false starts, lucky surprises, and eccentric characters. He explains why, given the complex nature of bacteria—and their ability to rapidly evolve into new forms—the only way to locate and test potential antibiotic strains is by large-scale, systematic, trial-and-error experimentation. Organizing that research needs large, well-funded organizations and businesses, and so our entire scientific-industrial complex, built around the pharmaceutical company, was born.

Timely, engrossing, and eye-opening, Miracle Cure is a must-read science narrative—a drama of enormous range, combining science, technology, politics, and economics to illuminate the reasons behind one of the most dramatic changes in humanity’s relationship with nature since the invention of agriculture ten thousand years ago.
Read More
“Rosen’s highly informed retelling captures the drama of scientists’ quest, against long odds, to find and produce bacteria-killing drugs—and the egos, ambitions, brilliance and resolve that drove them. . . . It is a strength of “Miracle Cure” that Rosen places its many tales of discovery in their larger contexts . . . an important contribution to a still-germane yet fast-receding history. And it’s all the more impressive that Rosen, formerly a book editor and publisher, wrote it as he was battling his own intractable disease.”
—The Wall Street Journal

“In Miracle Cure, William Rosen tells the lavish story of antibiotics with the flair and skill of a seasoned novelist, portraying his characters as all too-human, the research often fallible but occasionally transcendent. . . . Rosen's chronological approach gives the narrative its fluency; his wit and vivid detail make Miracle Cure an absorbing read. . . . A triumph of science writing that deserves a broad popular audience.”
—Minneapolie Star Tribune

"In this assured chronicle of the twentieth-century antibiotics revolution, William Rosen delivers reams of science at a thrilleresque pace. The experimentalists—Gerhard Domagk and Howard Florey among them—are vividly portrayed, as are the patients cured, the pharmaceutical corporations created and the moment in 1943 when bacteriologist Mary Hunt found the ancestor of all penicillin used today, on a mouldy melon. Antibiotic resistance and putative solutions are given their due, including Michael Fischbach's work on microbial-gene clusters in the human microbiome."
—Nature

“Former publisher and editor Rosen tackles a dazzling chapter of modern medical history in this chronicle of the discoveries that opened the age of antibiotics and gave humankind its first effective tool to fight back in an ‘eons-long war’ with infectious disease… Rosen’s thoughtful, scholarly, and engaging history is a powerful testament to this fight.”
—Publishers Weekly, (starred review)

“A richly documented history of the rise—and threatened future—of antibiotics… An encyclopedic reference for researchers and practitioners but also accessible for general readers due to Rosen's lively depiction of the people, places, and politics that color the history of the fight against infectious disease.”'
—Kirkus Reviews, (starred review)

"Miracle Cure is enthralling. Simply and elegantly, Rosen brings so much vibrancy to this narrative, and the science is gripping from beginning to end. A lucid and fascinating book, Miracle Cure is a must-read for anyone with a curious mind."
—Gilbert King, author of the Pulitzer prize-winning, Devil in the Grove

"Bill Rosen combines detailed analysis with a keen sense of humor to craft a page-turner describing the discovery of penicillin and streptomycin to combat scourges that had plagued man from time immemorial. This seminal historical work also warns the advances made during the antibiotics revolution in the 20th century are precarious and might be reversed if we fail to build upon the legacies of the heroic figures portrayed in Miracle Cure."
—Michael S Kinch, author of A Prescription for Change: The Looming Crisis in Drug Development

"William Rosen integrates personal histories and scientific concepts so seamlessly that Miracle Cure reads like a novel—I found it difficult to put down. This definitive history of antibiotics is a must-read for anyone interested in modern medicine.”
—Karl Drlica, Public Health Research Institute, Rutgers University and author of Antibiotic Resistance

“Rosen is a terrific storyteller and engaging stylist . . . He invites us to look beyond our . . . differences and recognize that we too live in a fragile equilibrium with the natural world.”
—The Daily Beast

“Readers will be swept along by the strong current of Mr. Rosen’s good natured erudition.”
—The Economist

“Rosen is a natural and playful storyteller, and his digressions both inform the narrative and lend it an eccentric and engaging rhythm.”
—The New York Times

“Rosen has a facility for the telling anecdote and the quirky aside.”
—Bill Gates
Read More 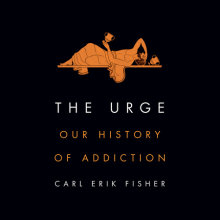