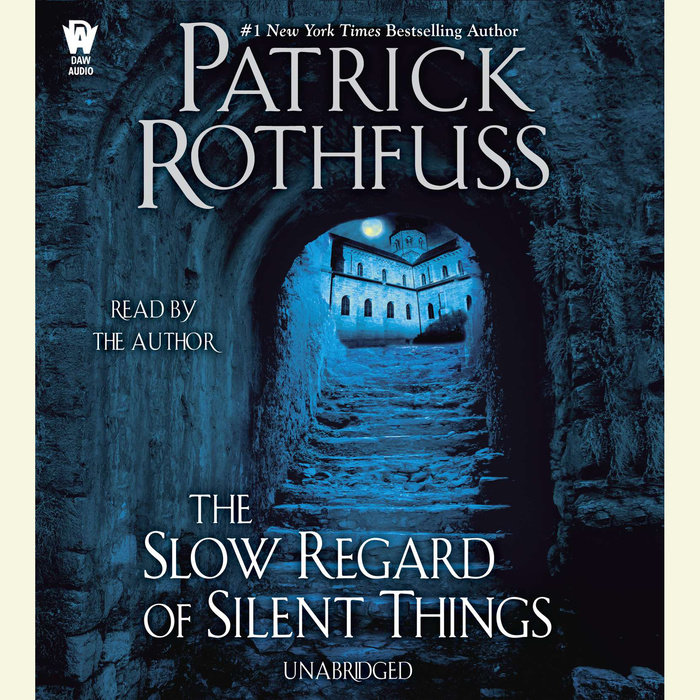 Written by: Patrick Rothfuss
Read by: Patrick Rothfuss
3 Hours and 40 Minutes Imprint: Penguin Audio Genre: Fiction - Fantasy - Epic Release Date: October 28, 2014
Deep below the University, there is a dark place. Few people know of it: a broken web of ancient passageways and abandoned rooms. A young woman lives there, tucked among the sprawling tunnels of the Underthing, snug in the heart of this forgotten place.

Her name is Auri, and she is full of mysteries.

The Slow Regard of Silent Things is a brief, bittersweet glimpse of Auri’s life, a small adventure all her own. At once joyous and haunting, this story offers a chance to see the world through Auri’s eyes. And it gives the reader a chance to learn things that only Auri knows....

In this book, Patrick Rothfuss brings us into the world of one of The Kingkiller Chronicle’s most enigmatic characters. Full of secrets and mysteries, The Slow Regard of Silent Things is the story of a broken girl trying to live in a broken world.

"As seamless and lyrical as a song... This breathtakingly epic story is heartrending in its intimacy and masterful in its narrative essence."
—Publishers Weekly (starred review)

"Reminiscent in scope of Robert Jordan's Wheel of Time series and similar in feel to the narrative tour de force of The Arabian Nights, this masterpiece of storytelling will appeal to lovers of fantasy on a grand scale."
—Library Journal (starred review)

"It is a rare and great pleasure to find a fantasist writing...with true music in the words.... Wherever Pat Rothfuss goes...he'll carry us with him as a good singer carries us through a song."
—Ursula K LeGuin

"The Wise Man's Fear is a beautiful book to read. Masterful prose, a sense of cohesion to the storytelling, a wonderful sense of pacing.... There is beauty to Pat's writing that defies description."
—Brandon Sanderson

"Patrick Rothfuss has real talent, and his tale of Kvothe is deep and intricate and wondrous."
—Terry Brooks

"[Rothfuss is] the great new fantasy writer we've been waiting for, and this is an astonishing book."
—Orson Scott Card

"As with all very best books in our field, it's not the fantasy trappings (as wonderful as they are) that make this novel so good, but what the author has to say about true, common things, about ambition and failure, art, love, and loss."
—Tad Williams

“This is an extremely immersive story set in a flawlessly constructed world and told extremely well.”
—Jo Walton, Tor.com

“It is the best book I have read it years, fantasy or otherwise.... The world is so deep, the stakes are so high, the characters so real, the mysteries so magical, the magic so mysterious, the plot so twisty…every day you haven’t read it is a day in your life that could be better.”
—Hank Green

If You Like Game of Thrones, Try These AudiobooksEpic Fantasy Audiobooks You Should Listen To