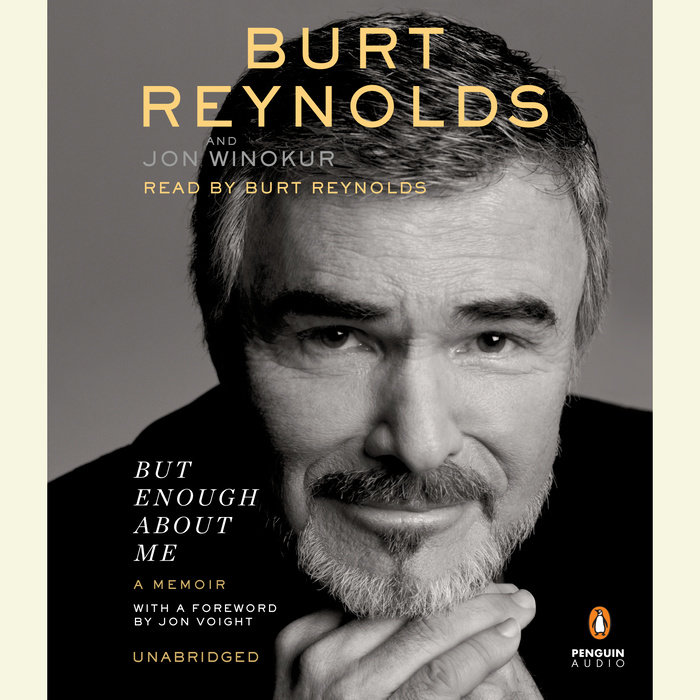 Burt Reynolds has been a Hollywood leading man for six decades, known for his legendary performances, sex-symbol status, and storied Hollywood romances. In his long career of stardom, during which he was number one at the box office for five years in a row, Reynolds has seen it all. But Enough About Me will tell his story through the people he’s encountered on his amazing journey. In his words, he plans to “call out the assholes,” try to make amends for “being the asshole myself on too many occasions,” and pay homage to the many heroes he has come to love and respect.

Beginning with Reynolds’s adolescence as a notable football player and the devastating car accident that ended his sports career, But Enough About Me takes readers from the Broadway stages where Reynolds got his start to his subsequent rise to fame. From Oscar nominations, to the spread in Cosmopolitan magazine that remains a notorious pop-cultural touchstone to this day, to the financial decisions that took him from rich to poor and back again, Reynolds shares the wisdom that has come from his many highs and lows. He is also ready, now more than ever, to dish. Reynolds famously romanced Dinah Shore, Sally Field, and Loni Anderson, to name only the top few; batted eyes at Bette Davis, Greta Garbo, Goldie Hawn, Farrah Fawcett, Marilyn Monroe, Candice Bergen, and so many more; went a few rounds (or more) with the likes of Donald Trump and Helen Gurley Brown; and rubbed elbows with Jon Voight, Clark Gable, Clint Eastwood, Frank Sinatra, Orson Welles, Mel Brooks, Woody Allen, and Johnny Carson, among many others. Through it all, Reynolds reflects on his personal pitfalls and recoveries and refocuses his attention on his legacy as a father and an acting teacher, leaving readers with a classic from one of Hollywood’s most enduring and treasured stars.
Read More
Praise for But Enough About Me

“The literary equivalent of finding oneself at a cocktail party with the guy who tells the best stories....It’s juicy, but not salacious, gracious without being cloying and ultimately impresses....such a joy to read.”—Palm Beach Post

“Throughout this often-surprising life story—capably coauthored by veteran showbiz writer Winokur—Reynolds reveals himself to be more thoughtful and introspective than his public image might suggest.”—Booklist
Read More