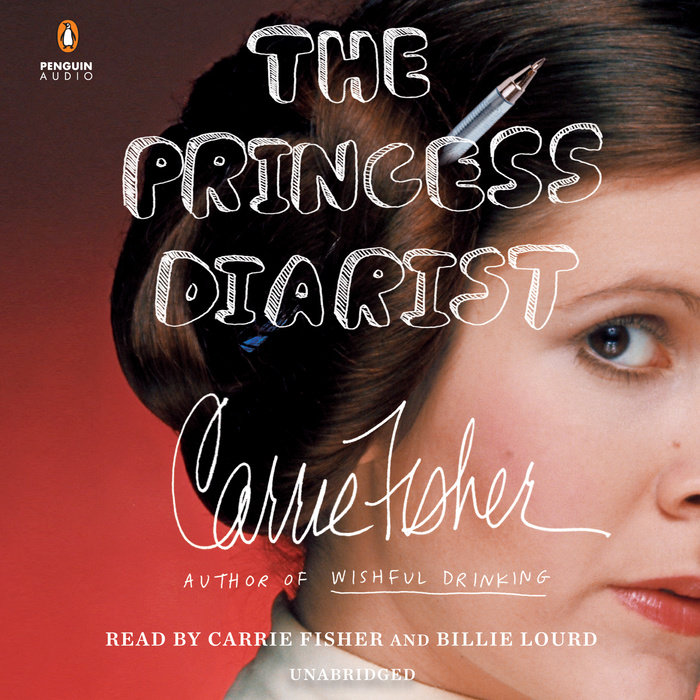 The Princess Diarist is Carrie Fisher’s intimate, hilarious and revealing recollection of what happened behind the scenes on one of the most famous film sets of all time, the first Star Wars movie.   *PEOPLE Magazine Best Book of Fall 2016  *New York Times Bestseller *

When Carrie Fisher recently discovered the journals she kept during the filming of the first Star Wars movie, she was astonished to see what they had preserved—plaintive love poems, unbridled musings with youthful naiveté, and a vulnerability that she barely recognized. Today, her fame as an author, actress, and pop-culture icon is indisputable, but in 1977, Carrie Fisher was just a teenager with an all-consuming crush on her costar, Harrison Ford.

With these excerpts from her handwritten notebooks, The Princess Diarist is Fisher’s intimate and revealing recollection of what happened on one of the most famous film sets of all time—and what developed behind the scenes.  Fisher also ponders the joys and insanity of celebrity, and the absurdity of a life spawned by Hollywood royalty, only to be surpassed by her own outer-space royalty. Laugh-out-loud hilarious and endlessly quotable, The Princess Diarist brims with the candor and introspection of a diary while offering shrewd insight into the type of stardom that few will ever experience.
Read More
Praise for The Princess Diarist
People Magazine’s Best Book of Fall 2016

“Characteristically frank and unflinching, funny and true...The Princess Diarist is about a woman’s relationship with desire—her own, and of others’ for her—writ large, as large as Star Wars.”—Julianne Escobedo Shepherd, Jezebel.com

“In her funny and frequently touching new memoir The Princess Diarist, the iconic Star Wars actress and author reveals the diaries she kept as a 19-year-old starring in the blockbuster sci-fi film.... It’s an eye-opener for fans, but it also shows a gifted writer even at a young age. There was a lot going on between Princess Leia’s hair buns.”—Brian Truitt, USA Today

“There’s tremendous insight into the volatile heart of a young woman, seen through the eyes of her wiser, older self still seeking her place in the universe.”—Anthony Breznican, Entertainment Weekly

“Are you a woman who’s ever fallen for a man who might fit this description? ‘With him love was easier done than said/instead of taking you to heart he would take you to bed/and you take what he has to offer lying down/you’re getting more involved while he’s still getting around.’ Yes? Read on...[The Princess Diarist] is a radical truth bomb.”—Julia Felsenthal, VOGUE.com

“An unflinching, sometimes painful, sometimes hilarious look inside the mind of a 19-year-old actress in the throes of a Hollywood locationship.”—Meredith Woerner, Los Angeles Times

“Fisher [is] a force to be reckoned with, both on the page and in real life.”—Heather Havrilevsky, Bookforum

“A frank, self-deprecating memoir...outspoken, honest commentary of what it's like to be Princess Leia on and off the screen.”—Kirkus Reviews

“The Princess Diarist...is about the making of Star Wars in 1976, but it’s definitely not for the kids — a wry, witty look back through the diaries she kept at the time, its main event is her steamy affair with co-star Harrison Ford.”—Colette Bancroft, Tampa Bay Times
Read More

Our Recommendations for First-Time ListenersThe Making of a Grammy-Winning Audiobook: Directing an IconA Room with a View (Perfect for Audiobook Listening)See More