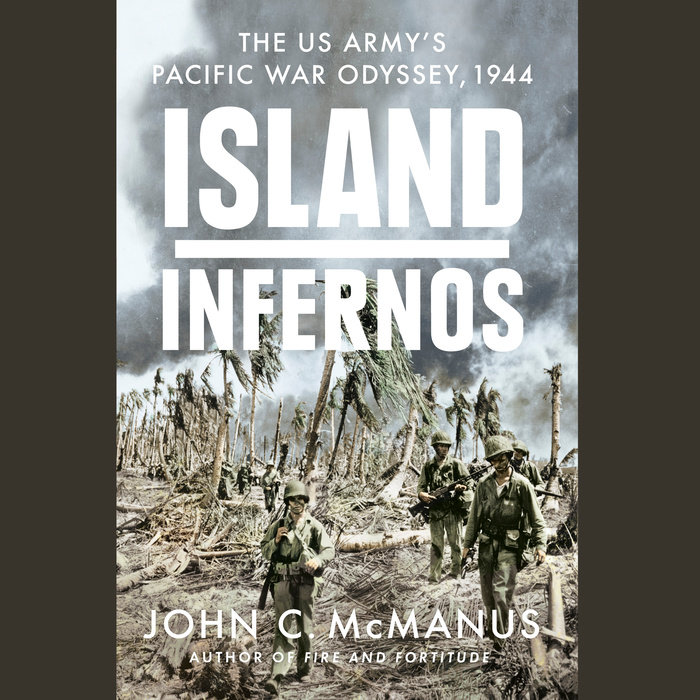 Written by: John C. McManus
Read by: Walter Dixon
25 Hours and 13 Minutes Imprint: Penguin Audio Genre: History - Wars & Conflicts - World War II - General Release Date: November 09, 2021
From the author of Fire and Fortitude, the continuation of the US Army's epic crusade in the Pacific War, from the battle of Saipan to the occupation of Japan

John C. McManus's award-winning Fire and Fortitude enthralled readers with an unforgettable and authoritative account of the US Army's evolution during the Pacific War, from the devastation of Pearl Harbor to the bloody battle for Makin Island in 1943. Now, in this second and final volume, he follows the Army as they land on Saipan, Guam, and Okinawa, climaxing with the American return to the Philippines, one of the largest, most complex operations in American history and one that would eventually account for one-third of all American casualties in the Pacific-Asia theater.

Brilliantly researched and written, the narrative moves seamlessly from the highest generals to the lowest foot soldiers and in between, capturing the true essence of this horrible conflict. It is a masterful history by one of our finest historians of World War II.
Read More
“A feat of prodigious scholarship and exhaustive research… The author’s brisk, engaging prose speeds the reader through a long and detailed narrative. If the third volume maintains the standards of the first two—surely a safe assumption—Mr. McManus will have produced a study of the American army in the Pacific as vast and splendid as Rick Atkinson’s Pulitzer Prize-winning ‘Liberation Trilogy’ about its deeds in Europe.”—The Wall Street Journal

“McManus follows Fortitude and Fire with an outstanding second volume in his planned trilogy on the Pacific theater of WWII... Distinguished by informative deep dives into logistical and strategic issues and McManus’s storytelling prowess, this is an excellent study of how the U.S. turned the tide of the war in the Pacific.”—Publishers Weekly, starred review

“The second of the author’s three-volume chronicle of the war against Japan is well worth the wait... McManus’ expertise shines brightest in his gripping descriptions of the tactics, technology, personalities, and gruesome fighting in a score of island campaigns… Outstanding military history.”—Kirkus, starred review

“Evenly written and insightful… McManus details how the U.S. Army matured into a professional force capable of sophisticated tactical and logistical maneuvers… Importantly, McManus gives much-needed attention to the experiences of Black soldiers... Command decisions and vivid descriptions of frontline combat are expertly interwoven to paint a fuller and more complex picture.”—Library Journal

“The Pacific theater in World War II was the most exotic and bizarre environment for large-scale combat. John C. McManus succeeds admirably in conveying the real nature of the campaigns in the critical year of 1944, for men and commanders alike. This is a rich and absorbing narrative for anyone who wants to understand just how tough combat was for young Americans plunged into a deathly struggle for survival.”—Richard Overy, author of Blood and Ruins: The Last Imperial War, 1931–1945

“Island Infernos cements John McManus as one of the leading historians of World War II writing today. The complex logistics, enormity, and awful brutal violence of the US Army’s operations in the Pacific in 1944 are laid bare in utterly compelling detail. Full of deep knowledge and sound judgment, this book vividly brings alive many of the men involved, from the high command to those on the ground battling their way through some of the most difficult terrain imaginable in which to fight. With a narrative that never once lets up, McManus’s book is a considerable achievement, and one that, importantly, adds much to our understanding of the Pacific War.”—James Holland, author of Normandy ’44: D-Day and the Epic 77-Day Battle for France