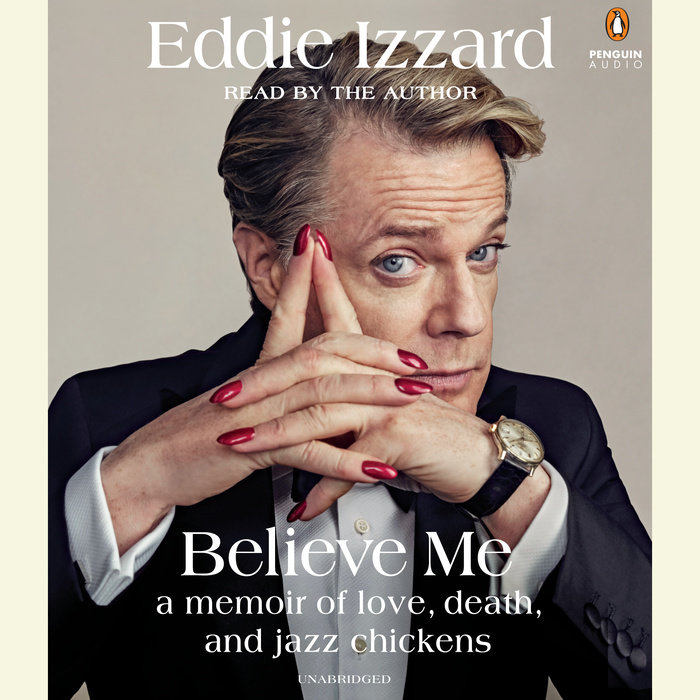 “Izzard is one of the funniest people alive, a talented actor, a sharp cross-dresser, an experienced marathon runner, and a great writer. You will have to read this if only to find out what a jazz chicken is.”—The Philadelphia Inquirer

With his brand of keenly intelligent humor that ranges from world history to historical politics, sexual politics, mad ancient kings, and chickens with guns, Eddie Izzard has built an extraordinary fan base that transcends age, gender, and race. Writing with the same candor and insight evident in his comedy, he reflects on a childhood marked by the loss of his mother, boarding school, and alternative sexuality, as well as a life in comedy, film, politics, running and philanthropy.

Honest and generous, Believe Me is an inspired account of a very singular life thus far.
Read More
“If you are a fan of Eddie Izzard, then you will love this book. If you are not a fan of Eddie Izzard, then there is a good chance that this book will make you one. The experience is akin to him sitting down and having a chat with you, which, we can all agree, sounds delightful.”—Thomas Burns Scully, Popdust.com

“[A] candid new book...The comedic tour de force [Eddie Izzard] opens up about his mother's death, coming out as transgender, and his quest for romantic love.”—Catie Lazarus, Out Magazine

“Beloved British comedian Eddie Izzard [writes] with the same wit and candor that characterizes his stand-up [and] tackles his sexuality, his troubled childhood, and the tumultuous early days of his career, even as he recounts his many excellent roles, albums, and tours.”—Maris Kreizman, Vulture

“What [Believe Me] adds is the larger context of the life—not just what thrills [Eddie Izzard], but what wounds him and what drives him...There is more to it than sadness, however. Izzard’s chronicle is reminiscent of his shows, a stream of surprising associations, full of footnotes and copious asides on subjects like NASA and Action Man.”—Nick A. Zaino III, The Boston Globe

“Getting a peek behind the curtain with regards to a guy like this is a rare treat. Believe Me is that peek, a glimpse at the inner workings, the gears and cogs that make a unique personality such as Eddie Izzard tick...All of it is engaging and heartfelt and unwaveringly honest. And oh yeah—it’s pretty freaking funny too.”—The Maine Edge

“Beloved comedian, actor, and writer Izzard…shares intimate details about his life and is emotionally transparent throughout this splendid memoir…The book is both funny and painful, and ultimately uplifting.”—Publishers Weekly

“This book is a raw, honest exploration of what it means to live your truth, to be unapologetically ambitious, and to walk through fear over and over again. It’s about being brave. And hilarious. It reminded me that walking through fear almost always leads to happiness.”—Chelsea Handler

“I had never heard of Eddie Izzard before, but judging by this delightful memoir, he has a glittering career ahead of him. I particularly enjoyed his descriptions of working in a Vatican slaughterhouse, acting as Deputy Foreign Minister in Gladstone’s first administration, his whacky exploits at his uncle’s Taxidermy Cafe, and his tragic death at the age of only eight at the Morris Dancing Finals in Bruges.”—John Cleese