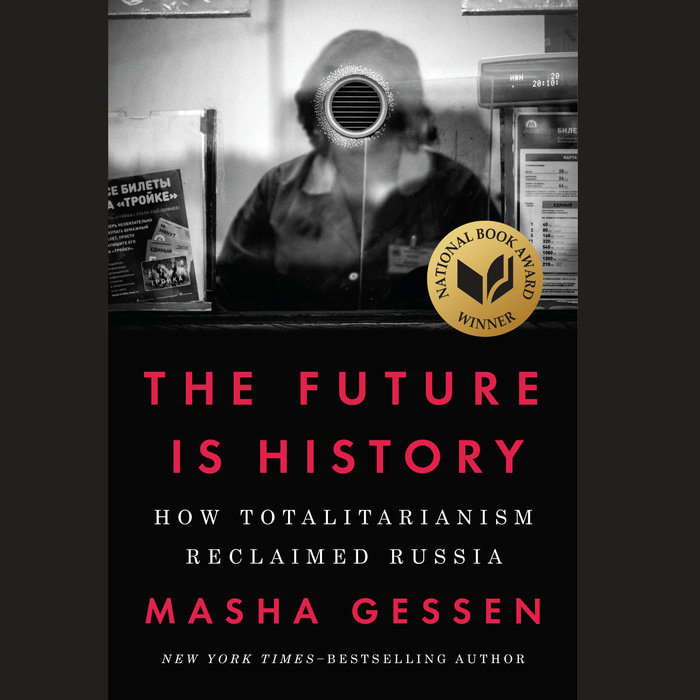 WINNER OF THE 2017 NATIONAL BOOK AWARD IN NONFICTION

The essential journalist and bestselling biographer of Vladimir Putin reveals how, in the space of a generation, Russia surrendered to a more virulent and invincible new strain of autocracy.

Award-winning journalist Masha Gessen's understanding of the events and forces that have wracked Russia in recent times is unparalleled. In The Future Is History, Gessen follows the lives of four people born at what promised to be the dawn of democracy. Each of them came of age with unprecedented expectations, some as the children and grandchildren of the very architects of the new Russia, each with newfound aspirations of their own--as entrepreneurs, activists, thinkers, and writers, sexual and social beings.

Gessen charts their paths against the machinations of the regime that would crush them all, and against the war it waged on understanding itself, which ensured the unobstructed reemergence of the old Soviet order in the form of today's terrifying and seemingly unstoppable mafia state. Powerful and urgent, The Future Is History is a cautionary tale for our time and for all time.
Read More
"Fascinating and deeply felt." -The New York Times Book Review

“Forceful and eloquent on the history of her native country, Gessen is alarming and pessimistic about its future as it doubles down on totalitarianism.” -Los Angeles Times

“A remarkable portrait of an ever-shifting era…Gessen weaves her characters’ stories into a seamless, poignant whole. Her analysis of Putin’s malevolent administration is just as effective…a harrowing, compassionate and important book.” -San Francisco Chronicle

“Ambitious, timely, insightful and unsparing … By far Gessen’s best book, a sweeping intellectual history of Russia over the past four decades, told through a Tolstoyan gallery of characters. … What makes the book so worthwhile … are its keen observations about Russia from the point of view of those experiencing its return to a heavy-handed state. It helps that Gessen is a participant, and not just an observer, able to translate that world adeptly for Western readers. … You feel right there on the streets.” -Washington Post

“It’s great and written in a direct, blunt style appropriate for the subject.” –Bill Clinton, New York Times "By the Book"

“Gessen’s masterful chronicle of how post-Soviet optimism turned to disappointment amid the return of repression and corruption is a book as fascinating as it is urgently relevant today.” – Boston Globe

“[R]eads almost like a Tolstoy novel...Gessen outlines the failure of Russia's reform with precision and humanity, thoroughly explaining the strength of an authoritarian government's hold on its citizens' psyche. It's not just history; it is an urgent awakening.” –Buzzfeed

“Remarkable…Gessen’s deft blending of…stories gives us a fresh view of recent Russian history with from within, as it was experienced at the time by its people. It is a welcome perspective.” –New York Review of Books

“An essential resource in helping us understand just what kind of threat we are dealing with.” – Interview Magazine

“Excellent…Gessen’s cast of characters tell a powerful story of their own, giving us an intimate look into the minds of a group crucial to understanding the country’s brief experience of democracy and of the authoritarian regime that follows.” –New Republic

“One of Putin’s most fearless and dogged critics tracks the devastating descent of post-Soviet Russia into authoritarianism and kleptocracy through the lives of four disillusioned citizens.”  –Esquire

“Given the current political atmosphere involving the U.S. and Russia, there’s no more relevant journalist than Masha Gessen . . . her reporting should continue to inform any discussion of Russia throughout her lifetime and beyond.” –Kirkus

“One of our most urgent and iconoclastic journalists...few...are better placed to understand the parallels between the two egomaniacs who now dominate world affairs.” –Out Magazine

“Starting with the decline, if not the disintegration, of the Soviet regime, Masha Gessen’s The Future is History tracks totalitarianism through the lens of generation raised in post-Communist Russia.” -Vanity Fair, "Hot Type"

“Gessen, the sterling Russian-American journalist and activist, has been outspoken in recent press articles about the threat of totalitarianism in America. But in her latest book, Future Is History, she never mentions America’s problems. Here, instead, she examines what is wrong in her native country and lets readers, wide-eyed, draw the parallels." -Christian Science Monitor

“Brilliant and sobering…writing in fluent English, with formidable powers of synthesis and a mordant wit, Gessen follows the misfortunes of four Russians who have lived most of their lives under Putin…Gessen vividly chronicles the story of a mortal struggle.” -Newsday

“Gessen is an exemplary journalist who knows when to sit back and let facts speak for themselves…[and] The Future Is History just might be the culmination of [her] life’s work... If you’ve been confused by all the talk about “Russia stuff,” this might be the most important book you’ll read all year.” –Seattle Times

“Impressive...The Future Is History warns us of what will become of the United States if we don’t push against our burgeoning authoritarian government and fight for democracy…A chilling read, but a necessary one.” –Bitch Media

“A lively and intimate narrative of the USSR’s collapse and its aftershocks, through the eyes of seven individuals… A gifted writer, Gessen is at her best when she’s recounting her characters’ experiences.” -Bookforum

“A thoroughly-reported history of a dismal sequence of events with a strong, engaging narrative and central set of characters.” –Forward

“A brave and eloquent critic of the Putin regime … For anyone wondering how Russia ended up in the hands of Putin and his friends, and what it means for the rest of us, Gessen’s book give an alarming and convincing picture.” –The Times

“Gessen makes a powerful case, arguing that Putin reconstituted the political and terror apparatus of the Soviet state and that ideology was the last block to fall into place.”  –Financial Times

“Russia is more at the forefront of our minds now than it’s been in all the time since the Cold War, and who better to enlighten us on the evolution of this complicated nation than journalist and Putin biographer Masha Gessen? Through her profiles of various Russians including four born in the 1980s, Gessen crafts a narrative that deciphers the Soviet Union’s move toward – and retreat from – democracy.” -Signature Reads

"A devastating, timely, and necessary reminder of the fragility and preciousness of all institutions of freedom." -Booklist (starred)

"Brilliant...A worthwhile read that describes how Putin’s powerful grip on Russia developed, offering a dire warning of how other nations could fall under a similar spell of state control." -Library Journal

"An intimate look at Russia in the post-Soviet period, when the public’s hopes for democracy devolved within a restricted society characterized by “a constant state of low-level dread"...a well-crafted, inventive narrative." -Publisher's Weekly

“Masha Gessen is humbly erudite, deftly unconventional, and courageously honest.  At this particular historical moment, when we must understand Russia to understand ourselves, we are all very lucky to have her."
- Timothy Snyder, author of On Tyranny

”A fine example of journalism approximating art. Necessary reading for anyone trying to understand the earthshaking events of our time: how in one country after another individual aspirations for wealth and power mutated into collective cravings for strongmen.”
- Pankaj Mishra, author of An End to Suffering and Age of Anger

‘The Future is History is a beautifully-written, sensitively-argued and cleverly-structured journey through Russia's failure to build democracy. The difficulty for any book about Russia is how to make the world’s biggest country human-sized, and she succeeds by building her story around the lives of a half-dozen people, whose fortunes wax and wane as the country opens up, then closes down once more. It is a story about hope and despair, trauma and treatment, ideals and betrayal, and above all about love and cynicism. If you want to truly understand why Vladimir Putin has been able to so dominate his country, this book will help you.’
- Oliver Bullough, author of Let Our Fame Be Great and The Last Man in Russia
Read More 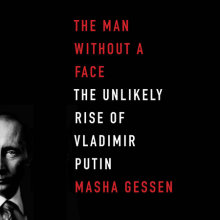 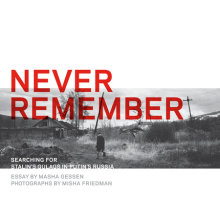 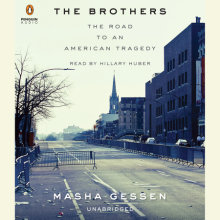