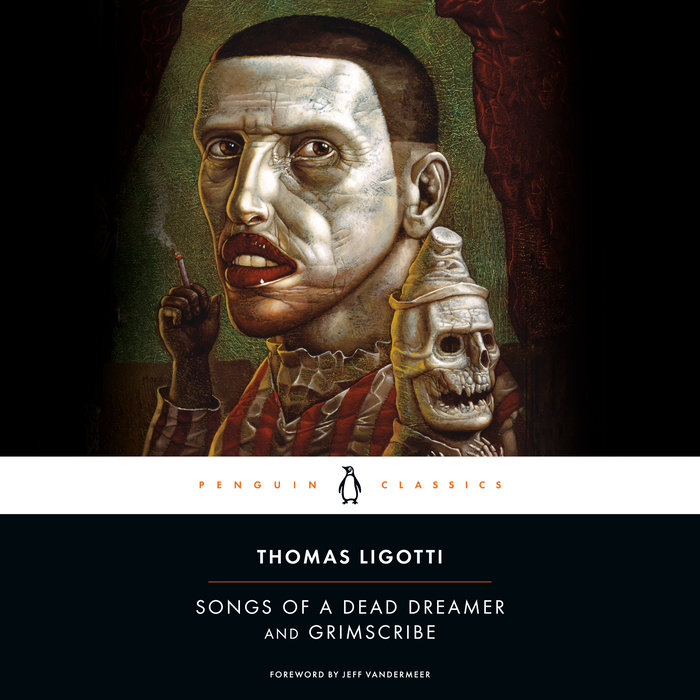 Thomas Ligotti’s debut collection, Songs of a Dead Dreamer, and his second, Grimscribe, permanently inscribed a new name in the pantheon of horror fiction.  Influenced by the strange terrors of Lovecraft and Poe and by the brutal absurdity of Kafka, Ligotti eschews cheap, gory thrills for his own brand of horror, which shocks at the deepest, existential, levels.

Ligotti’s stories take on decaying cities and lurid dreamscapes in a style ranging from rich, ornamental prose to cold, clinical detachment. His raw and experimental work lays bare the unimportance of our world and the sickening madness of the human condition. Like the greatest writers of cosmic horror, Ligotti bends reality until it cracks, opening fissures through which he invites us to gaze on the unsettling darkness of the abyss below.

For more than sixty-five years, Penguin has been the leading publisher of classic literature in the English-speaking world. With more than 1,500 titles, Penguin Classics represents a global bookshelf of the best works throughout history and across genres and disciplines. Readers trust the series to provide authoritative texts enhanced by introductions and notes by distinguished scholars and contemporary authors, as well as up-to-date translations by award-winning translators.
Read More
"Thomas Ligotti is a master of a different order, practically a different species. He probably couldn’t fake it if he tried, and he never tries. He writes like horror incarnate.”
—Terrence Rafferty, New York Times Book Review

"Mr. Ligotti, winner of three Bram Stoker Awards, is one of our finest writers of short horror, and this volume, reprinting his first two collections (1985, 1991), is an excellent introduction to the sustained storm of dread that is his universe."
—New York Times Book Review

“Songs of a Dead Dreamer is full of inexplicable and alarming delights. . . . Put this volume on the shelf right between H. P. Lovecraft and Edgar Allan Poe. Where it belongs.”
—The Washington Post

"Regarded by many as the only contemporary American writer who can be spoken of in the same breath as Poe and H.P. Lovecraft...No matter how nightmarish the events described, Ligotti’s prose is always precise and beautifully controlled.
—Michael Dirda, The Washington Post

"Experimental and absurdist, he spins worlds of decaying humanity, unreachable madness, and nightmare worthy of any horror movie . . . You may never sleep again after reading these, but it’ll be worth it."
—Vanity Fair

“Thomas Ligotti has had one of the most quietly extraordinary careers in the history of horror fiction. He is a dense, witty, and enormously inventive writer.”
—The Philadelphia Inquirer

"A cult figure or 'secret' of contemporary horror, Ligotti will become a household name with the release of this collection, which brings together his first two books of 'philosophical horror.' "
—Flavorwire

"[An] underground horror master...Ligotti writes philosophical horror that eschews the spurts of gore for a torrent of existential dread. For decades, Ligotti has been a horror writer's horror writer, but he may be finally getting his due."
—Men's Journal

"Ligotti is a brilliant prose stylist whose immersive gothic fictions make most horror stories seem as harmless as wind-up toys."
—The Seattle Times

"Both [collections] are groundbreaking works and are must-reads for fans of cosmic horror...And yet, it is not only horror audiences (myself included) who can appreciate Thomas Ligotti, for he also displays magnificent literary sensibilities, his prose being of the sort that often demands numerous re-reads to fully savor its structural elegance and evocative, even sensuous delights. He is every bit as deserving of the critical praise lavished upon the likes of Joyce Carol Oates, William Gay, and even non-genre authors Jonathan Lethem and Haruki Murakami."
—Lit Reactor
Read More