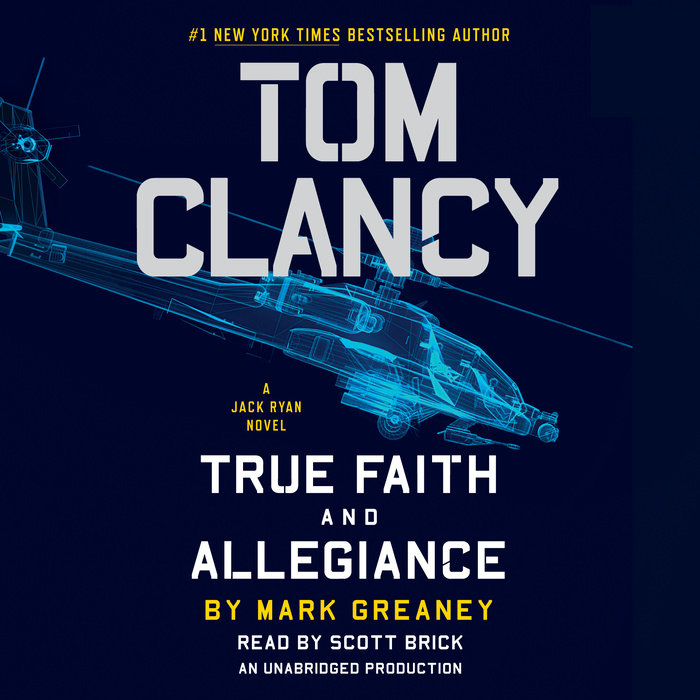 Written by: Mark Greaney
Read by: Scott Brick
19 Hours and 38 Minutes Imprint: Random House Audio Genre: Fiction - Thrillers - Suspense Release Date: December 06, 2016
The #1 New York Times–bestselling series is back with the most shocking revelation of all. After years of facing international threats, President Jack Ryan learns that the greatest dangers always come from within...

It begins with a family dinner in Princeton, New Jersey. After months at sea, U.S. Navy Commander Scott Hagan, captain of the USS James Greer, is on leave when he is attacked by an armed man in a crowded restaurant. Hagan is shot, but he manages to fight off the attacker. Though severely wounded, the gunman reveals he is a Russian whose brother was killed when his submarine was destroyed by Commander Hagan’s ship.

Hagan demands to know how the would-be assassin knew his exact location, but the man dies before he says more.

In the international arrivals section of Tehran’s Imam Khomeini airport, a Canadian businessman puts his fingerprint on a reader while chatting pleasantly with the customs official. Seconds later he is shuffled off to interrogation. He is actually an American CIA operative who has made this trip into Iran more than a dozen times, but now the Iranians have his fingerprints and know who he is. He is now a prisoner of the Iranians.

As more deadly events involving American military and intelligence personnel follow, all over the globe, it becomes clear that there has been some kind of massive information breach and that a wide array of America’s most dangerous enemies have made a weapon of the stolen data. With U.S. intelligence agencies potentially compromised, it’s up to John Clark and the rest of The Campus to track the leak to its source.

Their investigation uncovers an unholy threat that has wormed its way into the heart of our nation. A danger that has set a clock ticking and can be stopped by only one man...President Jack Ryan.
Read More
Praise for the Jack Ryan series

“Greaney…imbues his prose with the same gusto and sheer conviction that Clancy did.”—Booklist on Tom Clancy Commander in Chief

“A page-turner true to the Clancy legacy: informative, insightful and thrilling.”—Fredericksburg Free Lance-Star on Tom Clancy Commander in Chief

“An A+, a touchdown...Greaney has once again done fans proud, putting forth a thrilling plotline with the ultimate twists and turns, and some good, old-fashioned espionage to keep everyone on their toes...There have always been die-hard Clancy fans, but Mark Greaney, the fantastic writer of The Gray Man series, deserves a huge standing ovation for putting together yet another unforgettable Jack Ryan thriller!”—Suspense Magazine
Read More