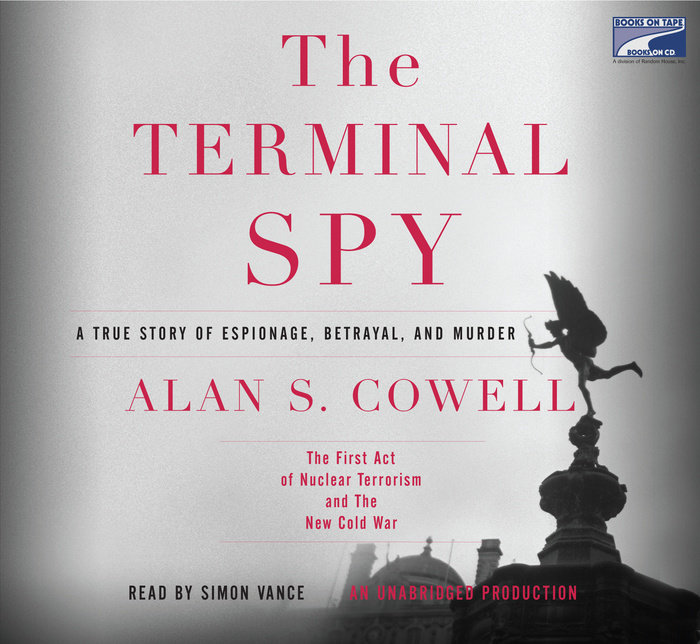 In a page-turning narrative that reads like a thriller, an award-winning journalist exposes the troubling truth behind the world’s first act of nuclear terrorism.

On November 1, 2006, Alexander Litvinenko sipped tea in London’s Millennium Hotel. Hours later the Russian émigré and former intelligence officer, who was sharply critical of Russian president Vladimir Putin, fell ill and within days was rushed to the hospital. Fatally poisoned by a rare radioactive isotope slipped into his drink, Litvinenko issued a dramatic deathbed statement accusing Putin himself of engineering his murder. Alan S. Cowell, then London Bureau Chief of the New York Times, who covered the story from its inception, has written the definitive story of this assassination and of the profound international implications of this first act of nuclear terrorism.

Who was Alexander Litvinenko? What had happened in Russia since the end of the cold war to make his life there untenable and in severe jeopardy even in England, the country that had granted him asylum? And how did he really die? The life of Alexander Litvinenko provides a riveting narrative in its own right, culminating in an event that rang alarm bells among western governments at the ease with which radioactive materials were deployed in a major Western capital to commit a unique crime. But it also evokes a wide range of other issues: Russia's lurch to authoritarianism, the return of the KGB to the Kremlin, the perils of a new cold war driven by Russia's oil riches and Vladimir Putin's thirst for power.

Cowell provides a remarkable and detailed reconstruction both of how Litvinenko died and of the issues surrounding his murder. Drawing on exclusive reporting from Britain, Russia, Italy, France, Germany, Austria, Switzerland, and the United States, he traces in unprecedented detail the polonium trail leading from Russia's closed nuclear cities through Moscow and Hamburg to the Millenium Hotel in central London. He provides the most detailed step-by-step explanation of how and where polonium was found; how the assassins tried on several occasions to kill Litvinenko; and how they bungled a conspiracy that may have had more targets than Litvinenko himself.

With a colorful cast that includes the tycoons, spies, and killers who surrounded Litvinenko in the roller-coaster Russia of the 1990s, as well as the émigrés who flocked to London in such numbers that the British capital earned the sobriquet “Londongrad,” this book lays out the events that allowed an accused killer to escape prosecution in a delicate diplomatic minuet that helped save face for the authorities in London and Moscow.

His title and subtitles, "The Terminal Spy: A True Story of Espionage, Betrayal, and Murder -- The First Act of Nuclear Terrorism and the New Cold War," suggest just how rich. It's hard to imagine, however, that even Cowell could have foreseen this complex tale's urgently prophetic dimension, since it's a story that repeatedly leads back to Vladimir Putin, shedding important light on the Russian strongman's exercise of power and on his attitude toward the West. As the Georgian crisis grinds on, understanding Putin and his brand of statecraft are matters of more than passing interest.

Cowell, a longtime correspondent for the New York Times, was reporting from the paper's London bureau when the Litvinenko story broke. The Russian had begun a lifetime involvement in intrigue as a counterintelligence agent in the Soviet KGB. After the fall of communism and the disintegration of the Soviet Union, he entered the domestic branch of the FSB, successor agency to the KGB, joining an organized crime unit. Like many a Russian with an eye for the main chance in that wild west interlude, Litvinenko attached himself to one of the emerging oligarchs fattening like carrion birds on the chaotic and corrupt privatization of former state resources -- in his case, Boris Berezovsky.

At one point, Litvinenko intervened to keep his patron from being framed by elements of state security for the murder of a television commentator at a station Berezovsky owned. The mogul fled the country and Litvinenko became a whistle-blower, alleging widespread misconduct and corruption in the FSB, which had him jailed for his trouble. Upon his release, Litvinenko joined Berezovsky and a growing number of Russians in London exile. There, he continued an obsession with Putin and what Litvinenko correctly saw as a reemerging Russian authoritarianism with its roots in the security services -- in other words, a creeping coup by elements of the old KGB.

While denouncing Putin in interviews with journalists and filmmakers, Litvinenko worked at putting together a private security business. It was in that connection that he joined another former KGB man, Andrei Lugovoi -- who was visiting from Moscow -- for drinks at London's popular Millennium Hotel bar. Litvinenko took a few sips of green tea with honey. Three weeks later, after a stunning and agonizing illness, he was dead.

Cowell employs meticulous reporting and numerous interviews with participants to re-create the hotel meeting, but best of all is his recap of the gripping forensic investigation that showed Litvinenko had been poisoned with a minute trace of a rare but deadly radioactive isotope, polonium-210. Investigation showed the substance probably was sprayed into the teapot from which the murdered man was served. Cowell has a "CSI"-worthy eye for forensic exposition, as in this passage:

"What was not generally known on the day that Alexander Litvinenko died was that the polonium had been discovered only in one of the final urine samples taken from him. If the [British]Ministry of Defense scientists at Aldermaston had not run the extremely unusual tests when they did, it is conceivable that the nature of the poisoning would have remained a mystery, as Litvinenko's killers surely intended it to be. . . .

"The scientists' conclusion began to explain how Litvinenko died. Once introduced into his body -- either swallowed or breathed in or enteringthrough an open wound -- the isotope tore relentlessly through his bone marrow and organs, destroying the immune system. The lethal dose measured a tiny fraction of a microgram, a mere speck, but it was far more than was needed to guarantee his death. . . . This was no ordinary murder."

Cowell plays out all the byzantine possibilities behind this killing with heroic clarity. (Lugovoi, by the way, made it back to Russia and was elected to the Duma, the lower house of parliament, as a nationalist deputy. Putin has refused a British request that he be extradited.)

Labyrinthine as the conceivable conspiracies against Litvinenko may have been, it's difficult not to focus on the fact that numerous thorns in Putin's side, from independent-minded journalists to Chechen separatists, have met similar extra-judicial fates, many by poison. The KGB, moreover, has maintained a highly secret laboratory devoted to novel poisons since the 1930s; 97% of the contemporary world's polonium is manufactured in a lab controlled by the FSB.

Litvinenko and Putin both were trained as KGB agents, but while the former was part of the heavy-handed and corrupt domestic service, Putin was educated for foreign service. It was in that directorate that many Russian nationalists believe the idealistic patriotism of Lenin's original secret service, the Cheka, lived on. The service's murderously brutal but incorruptible founder, Felix Dzierzynski, conceived of the Cheka as the "sword and flame of the revolution" and believed the secret services were the only institution capable of wielding supreme power.

As one of his early associates, the Latvian Martins Lacis, wrote: "The Cheka is not an investigative organ: it is the battle organ of the party of the future. . . . It annihilates without trial or it isolates from society by imprisoning in concentration camps. Its word is law." It also claimed in those early days the right to direct any of the nation's economic resources, much as Putin has done with Russia's oil and gas.

Unlike so many of his comrades, Dzierzynski was indifferent to personal comfort or gain. He lived in one room and subsisted on tea, bread and hand-rolled cigarettes. He shot any Chekist found to have taken a bribe and ordered alimony and child support deducted from the pay of agents unfaithful to their wives. Reading Romantic Polish poetry was his only recreation, and he had to be ordered by the Central Committee to take vacations.

Putin also is said to be incorruptible and personally austere, which is why a certain sort of chauvinistic Russian nationalist sees an admirable echo of the idealistic Dzierzynski in him. Even the implacably anti-Communist Alexander Solzhenitsyn embraced Putin before his recent death. Asked to reconcile their association by an interviewer from Germany's Der Spiegel, the Nobel laureate pointed out that Putin had been in the KGB's foreign service rather than the compromised domestic directorate.

All this seems freshly relevant because, as Cowell writes, "The death of Litvinenko would come to be seen as a defining moment of the Putin presidency. Putin sought to restore Moscow's greatness. The death of Litvinenko ensured that Russia's reputation as a land to be feared for the worst of reasons was revived for all the world to see."

Cowell's "The Terminal Spy" is not simply a wholly engrossing and thought-provoking story of espionage and homicide. As the bloody incursion into Georgia indicates, the difference between the way Putin's Russia deals with inconvenient dissidents and with its troublesome neighbors seems to be merely a matter of degree -- poison for one; the bullet and the bomb for the other
Read More