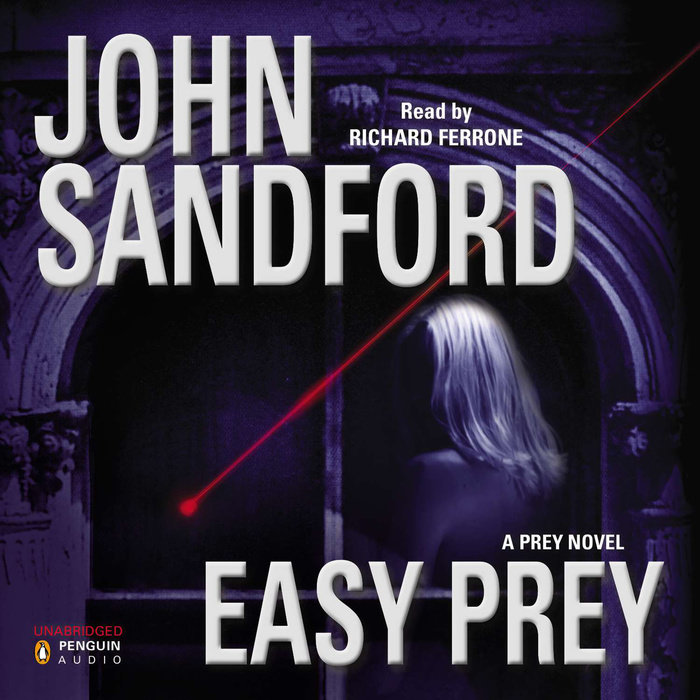 Written by: John Sandford
Read by: Richard Ferrone
5 Hours and 54 Minutes Imprint: Penguin Audio Genre: Fiction - Crime Release Date: June 14, 2004
In life she was a high-profile model. In death she is the focus of a media firestorm that’s demanding action from Lucas Davenport. One of his own men is a suspect in her murder. But when a series of bizarre, seemingly unrelated slayings rock the city, Davenport suspects a connection that runs deeper than anyone had imagined—one that leads to an ingenious killer more ruthless than anyone had feared....
Read More
“You won’t want to miss it.” —Los Angeles Times

“When you come out of the twists and turns that are Easy Prey, it is a marvel how [Sandford] could do this...he’s a writer in control of his craft.” —Chicago Sun-Times

“Crackerjack suspense...[Sandford’s] at the top of his game again with Easy Prey.” —New York Post

“Wildly successful...contains all the elements fans have come to expect: solid plot, gallows humor...sex, and the likeable, self-assured Davenport.” —Booklist

“A grand guignol of a climax.” —Kirkus Reviews

“The dialogue is deft, the melodrama masterfully orchestrated and the conclusion truly culminant. As secrets explode, as bullets fly and bodies fall, and as the ground keeps shifting, there’s hardly time to keep up with the spectacle.” —The Los Angeles Times

“[An] ever-entertaining series. As always, it’s a joy to follow this rare cop who gets led more often by his gut instinct than by clues. His humor, understated and perverse, can be wildly funny, and the people he runs across are shrewdly conceived originals.” —Publishers Weekly

“Here’s hoping that John Sandford never retires Lucas Davenport or stops dreaming up diabolical killers for the supersleuth to battle. The author’s unbeatable at juggling suspense, comedy, sex...and [his] plots seem to be moving faster than ever.” —The New York Post

“Lucas Davenport is always in top form, and with Easy Prey, Sandford has another winner to add to the Prey books.” —The Orlando Sentinel