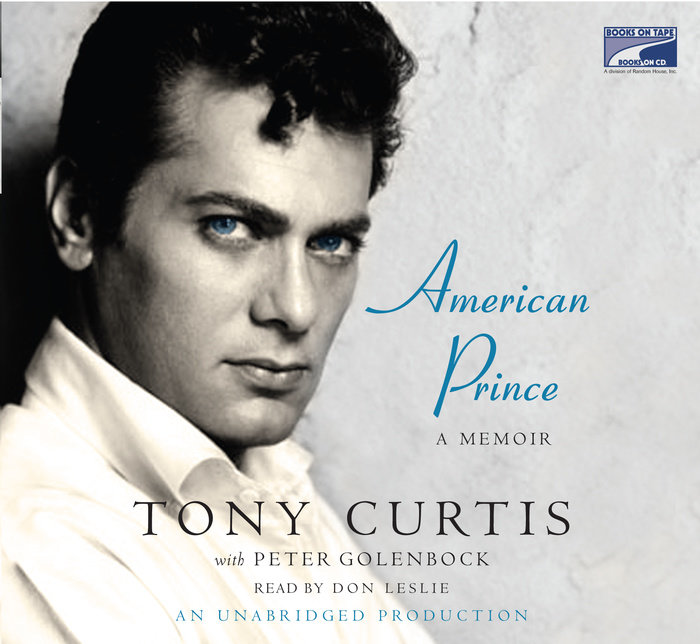 Written by: Tony Curtis & Peter Golenbock
Read by: Don Leslie
5 Hours and 5 Minutes Imprint: Random House Audio Genre: Biography & Autobiography - Personal Memoirs Release Date: October 14, 2008
He was the Golden Boy of the Golden Age. Dashing and debonair, Tony Curtis arrived on the scene in a blaze of bright lights and celluloid. His good looks, smooth charm, and natural talent earned him fame, women, and adulation–Elvis copied his look and the Beatles put him on their Sgt. Pepper album cover. But the Hollywood life of his dreams brought both invincible highs and debilitating lows. Now, in his captivating, no-holds-barred autobiography, Tony Curtis shares the agony and ecstasy of a private life in the public eye.
No simple tell-all, American Prince chronicles Hollywood during its heyday. Curtis revisits his immense body of work and regales readers with stories of his associations with Frank Sinatra, Laurence Olivier, director Billy Wilder, as paramours Natalie Wood and Marilyn Monroe, among others.
Written with humor and grace, American Prince is a testament to the power of living the life of one’s dreams.
Read More
“[F]illed with fond recollections of [Curtis’s] friendships with the famous and powerful but punctuated, too, by harsh words for Hollywood legends he says did him wrong….Curtis spares few intimate details about his years as a Hollywood lothario, including his teenage affair with a redheaded, ponytailed Marilyn Monroe.”
—USA Today

“When you’re with Tony Curtis, you’re with somebody very alive. He was—and is—one of the most ‘up’ people I have ever known.”
—Sidney Poitier

“Tony Curtis could have just been the beautiful young leading man, handsome, charming as hell . . . [but] he wanted to be a good actor, and he’s the only guy I know wholearned his craft successfully.”
—Jack Lemmon

“For Some Like It Hot, I wanted a straight leading man and a comedian. I was sure Tony was right for it. Tony is so open and animated. . . . It was a huge, wonderful
plus for the picture.”
—Billy Wilder
Read More