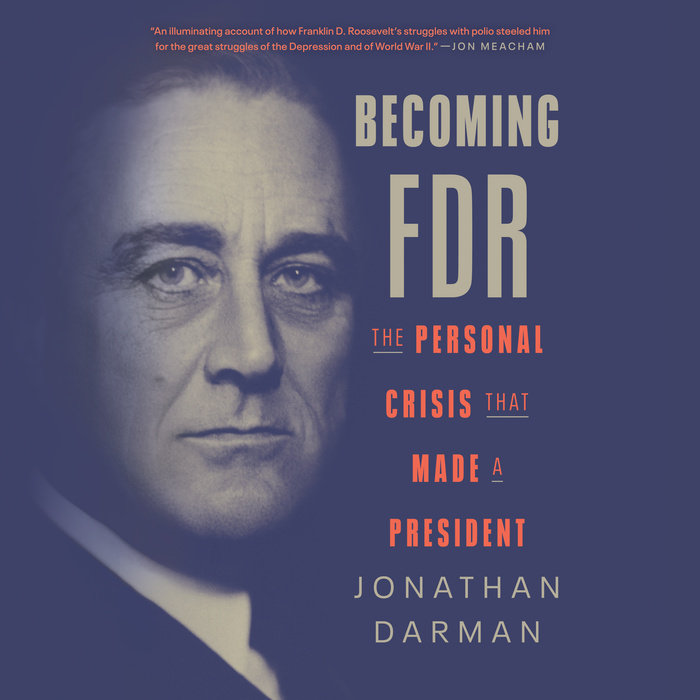 Written by: Jonathan Darman
Read by: Will Damron
13 Hours Imprint: Random House Audio Genre: Biography & Autobiography - Presidents & Heads Of State Release Date: September 06, 2022
“An illuminating account of how Franklin D. Roosevelt’s struggles with polio steeled him for the great struggles of the Depression and of World War II.”—Jon Meacham

“A valuable book for anyone who wants to know how adversity shapes character. By understanding how FDR became a deeper and more empathetic person, we can nurture those traits in ourselves and learn from the challenges we all face.”—Walter Isaacson, bestselling author of Steve Jobs and Leonardo Da Vinci

In popular memory, Franklin Delano Roosevelt was the quintessential political “natural.” Born in 1882 to a wealthy, influential family and blessed with an abundance of charm and charisma, he seemed destined for high office. Yet for all his gifts, the young Roosevelt nonetheless lacked depth, empathy, and an ability to think strategically. Those qualities, so essential to his success as president, were skills he acquired during his seven-year journey through illness and recovery.

Becoming FDR traces the riveting story of the struggle that forged Roosevelt’s character and political ascent. Soon after contracting polio in 1921 at the age of thirty-nine, the former failed vice-presidential candidate was left paralyzed from the waist down. He spent much of the next decade trying to rehabilitate his body and adapt to the stark new reality of his life. By the time he reemerged on the national stage in 1928 as the Democratic candidate for governor of New York, his character and his abilities had been transformed. He had become compassionate and shrewd by necessity, tailoring his speeches to inspire listeners and to reach them through a new medium—radio. Suffering cemented his bond with those he once famously called “the forgotten man.” Most crucially, he had discovered how to find hope in a seemingly hopeless situation—a skill that he employed to motivate Americans through the Great Depression and World War II. The polio years were transformative, too, for the marriage of Franklin and Eleanor, and for Eleanor herself, who became, at first reluctantly, her husband's surrogate at public events, and who grew to become a political and humanitarian force in her own right.

Tracing the physical, political, and personal evolution of the iconic president, Becoming FDR shows how adversity can lead to greatness, and to the power to remake the world.
Read More
“With superb insight into human nature, Jonathan Darman has written a compelling and illuminating account of how a battle with a virus shaped the life of the man to whom the fate of everything would fall. Franklin D. Roosevelt’s struggles with polio steeled him for the great struggles of the Depression and of World War II, and Darman tells that story in vivid and convincing detail.”—Jon Meacham, Pulitzer Prize winning author of Franklin and Winston: An Intimate Portrait of an Epic Friendship

“This fascinating story of how Franklin D. Roosevelt was forged by polio is a moving personal drama. More than that, it’s a valuable book for anyone who wants to know how adversity shapes character. By understanding how FDR became a deeper and more empathetic person, we can nurture those traits in ourselves and learn from the challenges we all face.”—Walter Isaacson, bestselling author of Steve Jobs and Leonardo Da Vinci

“Franklin D. Roosevelt has been a strangely elusive figure to biographers, but he comes vividly to life in Jonathan Darman’s moving and insightful portrait. A gifted historian and writer, Darman has given us a parable of redemption through suffering, a sensitive portrait of a marriage, and a fascinating study of the acquisition of power. This is the gripping story of how a lightweight playboy became a great world leader.”—Evan Thomas, author of First: Sandra Day O’Connor

“This moving portrait of Franklin Roosevelt’s rise to power gives us new insights on his inner life. Jonathan Darman writes with grace, ease, and a keen eye for human detail as he tells the story of FDR in his crucible years. It’s about the making of the man before the presidency, before his greatness, and what he had to do and face before he could become who he really was.”—Peggy Noonan, columnist for The Wall Street Journal

“At a time when suffering and resilience have taken on new meaning for us all, Jonathan Darman offers us a compelling and compassionate portrait of a man who did extraordinary things because he came to understand both.”—Drew Gilpin Faust, bestselling author of This Republic of Suffering