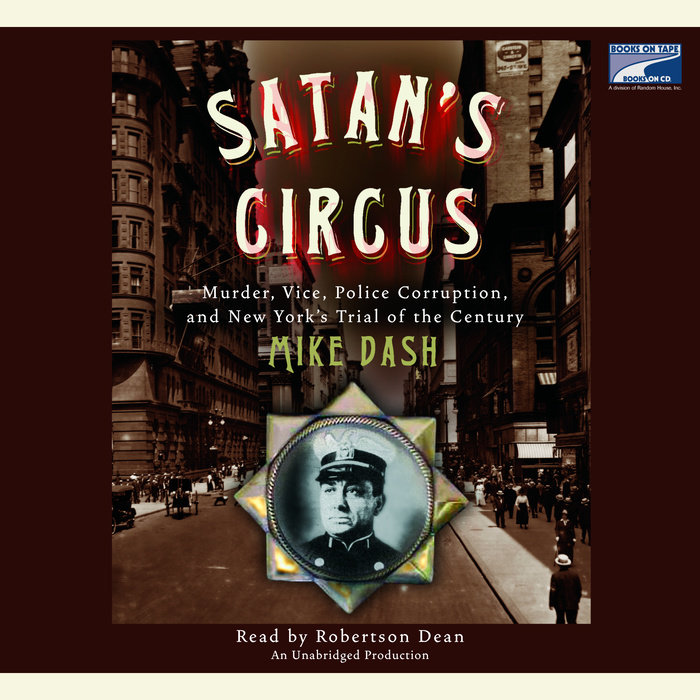 They called it Satan’s Circus–a square mile of Midtown Manhattan where vice ruled, sin flourished, and depravity danced in every doorway. At the turn of the twentieth century, murder was so common in the vice district that few people were surprised when the loudmouthed owner of a shabby casino was gunned down on the steps of its best hotel. But when, two weeks later, an ambitious district attorney charged young policeman Charley Becker with ordering the murder, even the denizens of Satan’s Circus were surprised. The handsome lieutenant was a decorated hero, the renowned leader of New York’s vice-busting Special Squad. Was he a bad cop leading a double life, or a pawn felled by the sinister rogues who ran Manhattan’s underworld?

With appearances by the legendary and the notorious, SATAN’S CIRCUS brings to life an almost-forgotten Gotham. Chronicling Charley Becker’s rise and fall, the audiobook tells of the raucous, gaudy, and utterly corrupt city that made him, and recounts not one but two sensational murder trials that landed him in the electric chair.
Read More
"Satan's Circus is the intriguing, tragic story of New York's most notorious- and most misunderstood- crime scandals. Mike Dash has provided a terrific, lively narrative of one of the city's most colorful eras."
-Kevin Baker, bestselling author of Strivers Row

“High-level corruption, betrayals, political shenanigans, a spectacular murder case, a gruesome execution, and a voyage through one of New York's most exotic demimonde cycles. These are just some of the ingredients Dash injects into an engrossing tale that still reverberates today.”
-Selwyn Raab, New York Times bestselling author of Five Families

"Combining history and entertainment, Satan’s Circus is a fascinating read. Mike Dash artfully describes a grimy Gotham from a century ago with its swarming bars, corrupt pols, and one-of-a-kind underworld forces that sent police lieutenant Charley Becker to the electric chair. Be forewarned, once you pick up Satan's Circus you won't be able to put it down."
—Thomas Kelly, author of Empire Rising and The Rackets
Read More