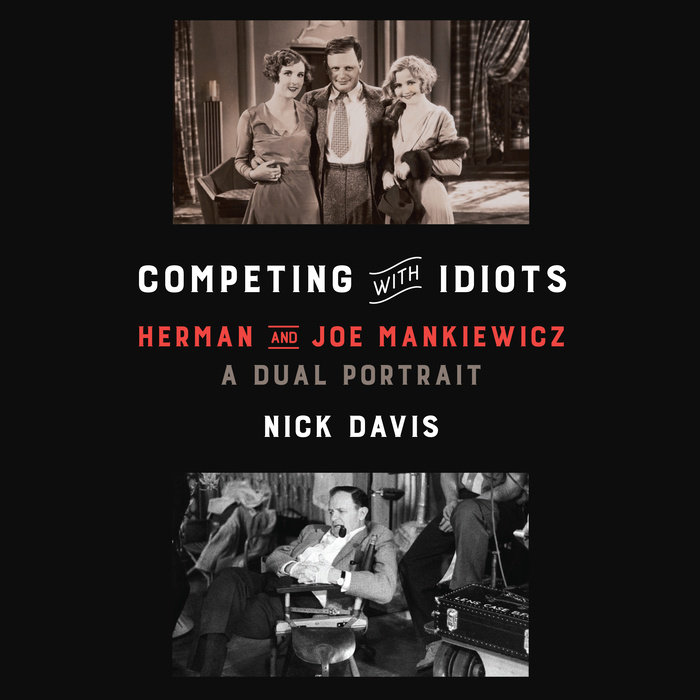 One most famous for having written Citizen Kane (with Orson Welles, as most recently portrayed in David Fincher's acclaimed Netflix film, Mank); the other, All About Eve; one, who only wrote screenplays but believed himself to be a serious playwright, slowly dying of alcoholism and disappointment; the other, a four-time Academy Award-winning director, auteur, sorcerer, and seducer of leading ladies, one of Hollywood's most literate and intelligent filmmakers.

Herman went to Hollywood in 1926, was almost immediately successful (his telegram to Hecht back east: "MILLIONS ARE TO BE GRABBED OUT HERE AND YOUR ONLY COMPETITION IS IDIOTS. DON'T LET THIS GET AROUND."), becoming one of the highest-paid screenwriters in Hollywood . . .

Joe, eleven years younger, focused, organized, a disciplined writer, with a far more distinguished career, surpassing his worshipped older brother . . . producing The Philadelphia Story, writing and directing A Letter to Three Wives and All About Eve, both of which won him Oscars for writing and directing (All About Eve received a record fourteen Oscar nominations), before seeing his career upended by the spectacular fiasco of Cleopatra . . .

In this large, moving portrait, meticulously woven together by the grandson of Herman, great-nephew of Joe, we see the lives of these two men--their dreams and desires, their fears and feuds, struggling to free themselves from their dark past; and the driving forces that kept them bound to a system they loved and hated.
Read More
Los Angeles Times Book Prize Finalist

“[Davis’s] perspective gives the book an intimacy that raises the emotional stakes, especially when it comes to dysfunctional family dynamics . . . He sharply depicts the brothers’ complex relationship — how they helped each other but were also driven by a fierce and bitter rivalry.”—The Washington Post

“No Hollywood figures have burned into memory more than the Mankiewiczs, dissolute and inspired Herman, driven and beglittered Joe. From a uniquely intimate viewpoint, Nick Davis gives us their story, and the larger story of their—and his—family. A wonderful book both for lovers of Hollywood lore and history and for anyone who ponders the many ways family heritage—and sibling rivalry—stress and shape our sensibilities.”—Adam Gopnik

“Competing with Idiots is full of juicy Hollywood stories as it weaves an incredible tale about these two wildly different, but equally talented Mankiewicz brothers as told by Herman’s grandson Nick Davis. Their working lives brought us well-known masterpieces like Citizen Kane (Herman wrote it) and All About Eve (Joe wrote and directed), but their personal lives were no less dramatic. A thrilling book.”—Maria Semple

“Davis recounts the story of brothers Herman and Joseph L. Mankiewicz, whose names loom large in the annals of Hollywood history and in the author’s own family . . . The brothers had a complex relationship, fraught with jealousy and competition but also love, and Davis recounts it with feeling, drawing on fastidious research. Movie fans and viewers of the recent Netflix film Mank will give two thumbs up to this carefully crafted, fascinating account of two legendary Hollywood figures.”—Library Journal

“Fans of the movie Mank will be intrigued by this blend of memoir and biography from the grandson of Herman Mankiewicz and great-nephew of Joe . . . Davis capably summarizes the two men's careers . . . thoughtful and engaging.”—Booklist

On the Podcast: Elisa Donovan, Rick Bragg, and Nick Davis