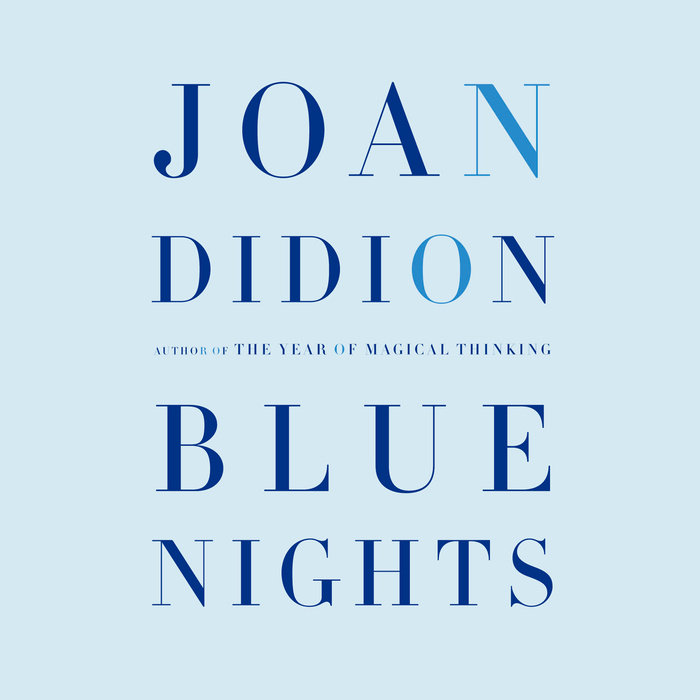 Written by: Joan Didion
Read by: Kimberly Farr
4 Hours and 21 Minutes Imprint: Random House Audio Genre: Biography & Autobiography - Personal Memoirs Release Date: November 01, 2011
From one of our most powerful writers, a work of stunning frankness about losing a daughter. Richly textured with bits of her own childhood and married life with her husband, John Gregory Dunne, and daughter, Quintana Roo, this new book by Joan Didion examines her thoughts, fears, and doubts regarding having children, illness, and growing old.

Blue Nights opens on July 26, 2010, as Didion thinks back to Quintana’s wedding in New York seven years before. Today would be her wedding anniversary. This fact triggers vivid snapshots of Quintana’s childhood—in Malibu, in Brentwood, at school in Holmby Hills. Reflecting on her daughter but also on her role as a parent, Didion asks the candid questions any parent might about how she feels she failed either because cues were not taken or perhaps displaced. “How could I have missed what was clearly there to be seen?” Finally, perhaps we all remain unknown to each other. Seamlessly woven in are incidents Didion sees as underscoring her own age, something she finds hard to acknowledge, much less accept.

Blue Nights—the long, light evening hours that signal the summer solstice, “the opposite of the dying of the brightness, but also its warning”—like The Year of Magical Thinking before it, is an iconic book of incisive and electric honesty, haunting and profoundly moving.
Read More
“A haunting memoir . . . Didion is, to my mind, the best living essayist in America . . . What appears on the surface to be an elegantly, intelligently, deeply felt, precisely written story of the loss of a beloved child is actually an elegantly, intelligently, deeply felt, precisely written glimpse into the abyss, a book that forces us to understand, to admit, that there can be no preparation for tragedy, no protection from it, and so, finally, no consolation . . . The book has . . . an incantatory quality: it is a beautiful, soaring, polyphonic eulogy, a beseeching prayer the is sung even as one knows the answer to one’s plea, and that answer is: No.”
—Cathleen Schine, The New York Review of Books

“Blue Nights, though as elegantly written as one would expect, is rawer than its predecessor, the ‘impenetrable polish’ of former, better days now chipped and scratched. The author as she presents herself here, aging and baffled, is defenseless against the pain of loss, not only the loss of loved ones but the loss that is yet to come: the loss, that is, of selfhood. The book will be another huge success . . . Certainly as a testament of suffering nobly borne, which is what it will be generally taken for, it is exemplary. However, it is most profound, and most provocative, at another level, the level at which the author comes fully to realize, and to face squarely, the dismaying fact that against life’s worst onslaughts nothing avails, not even art; especially not art.”
—John Banville, The New York Times Book Review

"The marvel of Blue Nights is that its 76-year-old, matchstick-frail author has found the strength to articulate her deepest fears—which are fears we can all relate to."
—Heller McAlpin, The Wasthington Post

“The master of American prose turns her sharp eye on her own family once again in this breathtaking follow-up to The Year of Magical Thinking. With harrowing honesty and mesmerizing style, Didion chronicles the tragic death of her daughter, Quintana, interwoven with memories of their happier days together and Didion’s own meditations on aging.”
—Malcolm Jones and Lucas Wittmann, Newsweek

“Darkly riveting . . . The cumulative effect of watching her finger her recollections like beads on a rosary is unexpectedly instructive. None of us can escape death, but Blue Nights shows how Didion has, with the devastating force of her penetrating mind, learned to simply abide.”
—Louisa Kamps, Elle

“A scalpel-sharp memoir of motherhood and loss . . . Now coping with not only grief and regret but also illness and age, Didion is courageous in both her candor and artistry, ensuring that this infinitely sad yet beguiling book of distilled reflections and remembrance is graceful and illuminating in its blue musings.”
—Donna Seaman, Booklist

"Brilliant...Nothing Didion has written since Play It As It Lays seems to me as right and true as Blue Nights. Nothing she has written seems as purposeful and urgent to be told."
—Joe Woodward, Huffington Post

“The reader only senses how intimately she understands her instrument. Her sentences are unquestionably taut, rhythmic and precise.”
—Time Out NY

"A searing, incisive look at grief and loss by one of the most celebrated memoirists of our time."
—Relevant Magazine 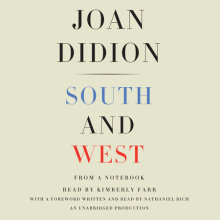