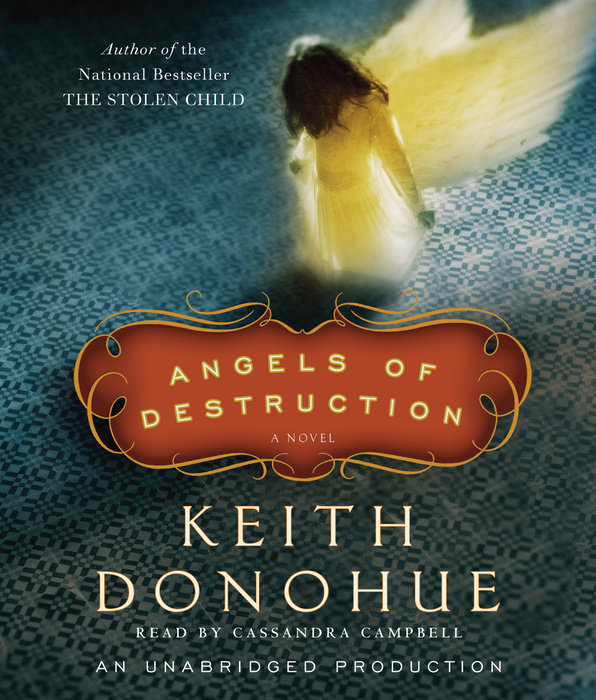 Keith Donohue’s first novel, The Stolen Child, was a national bestseller hailed as “captivating” (USA Today), “luminous and thrilling” (Washington Post), and “wonderful...So spare and unsentimental that it’s impossible not to be moved (Newsweek. His new novel, Angels of Destruction, opens on a winter’s night, when a young girl appears at the home of Mrs. Margaret Quinn, a widow who lives alone. A decade earlier, she had lost her only child, Erica, who fled with her high school sweetheart to join a radical student group known as the Angels of Destruction. Before Margaret answers the knock in the dark hours, she whispers a prayer and then makes her visitor welcome at the door.

The girl, who claims to be nine years old and an orphan with no place to go, beguiles Margaret, offering some solace, some compensation, for the woman’s loss. Together, they hatch a plan to pass her off as her newly found granddaughter, Norah Quinn, and enlist Sean Fallon, a classmate and heartbroken boy, to guide her into the school and town.

Their conspiracy is vulnerable not only to those children and neighbors intrigued by Norah’s mysterious and magical qualities but by a lone figure shadowing the girl who threatens to reveal the child’s true identity and her purpose in Margaret’s life. Who are these strangers really? And what is their connection to the past, the Angels, and the long-missing daughter?

Angels of Destruction is an unforgettable story of hope and fear, heartache and redemption. The saga of the Quinn family unfolds against an America wracked by change. As it delicately dances on the line between the real and the imagined, this mesmerizing new novel confirms Keith Donohue’s standing as one of our most inspiring and inventive novelists.
Read More
Praise for ANGELS OF DESTRUCTION

“Norah’s unexplained origins form the enigmatic core of this story . . . the novel movingly illustrates the quest for connection hardwired into every human heart.”
—Publishers Weekly

“[A] strange and finely written novel. Donohue has a talent for using small details to draw his characters, and the result is a dark and unsettling story that takes hold of the reader.”
—Library Journal

“Fused with spectral imagery and magnetic characters, Donohue’s ethereal foray into the unexpected consequences of love, impenetrable depths of loss, and infinite possibilities of faith is a chilling yet affirmative experience.”
—Booklist

“[A] beguiling tale of those who love well, but not wisely, unspooling like a poem embroidered on the heart — ornate, painful and true. . . . While some readers might liken Donohue’s penchant for mystical realism to that of novelist Alice Hoffman, any sweeping comparisons shortchange both writers, whose immense gifts bear separate and distinct literary imprimaturs. Still, he shares Hoffman’s uncanny ear for capturing the libretto of childhood . . .”
—BookPage

“Angels of Destruction is replete with ghostly presences, harbingers of doom, angels good and bad. Surveys indicate that more than half of us believe in angels, so this otherworldly novel should find a ready audience.”
—Boston Globe

“Donohue never quite reveals the mystery at the heart of Norah's sudden appearance, and that makes Angels of Destruction all the more satisfying and, yes, believable. Literary and historical clues are scattered throughout: references to the atomic bomb; a spectral man in fedora and camel-hair coat who pursues Norah and haunts Margaret; and an oblique nod to the Liber Juratus, a 14th-century manuscript containing a roll call of angels. The talisman that both Norah and Una pass on to those they love is a child's teacup with a chip in it, which invokes Auden's great poem As I Walked Out One Evening: ‘The crack in the tea-cup opens/A lane to the land of the dead.’
Angels of Destruction doesn't shrink from the tragedies and inevitable separations that dog us. The book's coda is beautiful and wrenching, yet still leaves its protagonists and readers open to the possibility that the miraculous, once glimpsed, might recur. ‘Love is not consolation, it is light,’ wrote Simone Weil. In these bleak times, we can thank Donohue for opening a door in a darkened room.”
—Washington Post

Fans of the author’s debut novel, The Stolen Child, will enjoy the same balancing act between reality and fantasy. . . . Donohue marries some fantastical themes with an unadorned style of writing that should appeal to realists and fantasy fans alike.”
—Chicago Sun-Times

“With ‘Angels,’ Donohue delivers a magical tale of love and redemption that is as wonderfully written as it is captivating. . . . Donohue is delightfully descriptive in his writing. His word choices are carefully considered . . . and his pacing rivets you to page after page. . . . ‘Angels’ earns its wings.”
—Pittsburgh Post-Gazette

“Angels of Destruction is charming, suspenseful, and even touching.”
—New York Daily News

Praise for The Stolen Child

“A wonderful, fantasy-laden debut . . . so spare and unsentimental that it’s impossible not to be moved.”
—Newsweek

“Utterly absorbing . . . a luminous and thrilling novel about our humanity.”
—Washington Post

“The book’s emotional impact is as fierce as the imagination behind it. The result is magical.”
—People