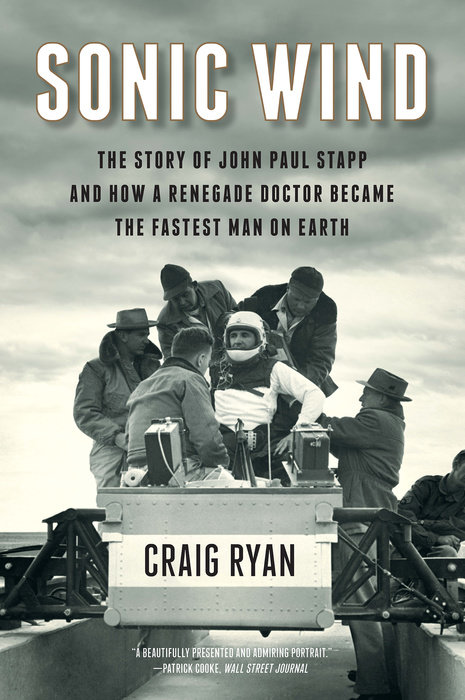 Written by: Craig Ryan
Read by: Christopher Grove
15 Hours and 38 Minutes Imprint: Random House Audio Genre: Science - History Release Date: January 24, 2017
Sixty years ago, cars and airplanes were still deathtraps waiting to happen. Today, both are safer than ever, thanks in part to one pioneering air force doctor’s research on seatbelts and ejection seats. The exploits of John Paul Stapp (1910–1999) come to thrilling life in this biography of a Renaissance man who was once blasted—faster than a .45 caliber bullet—across the desert in his Sonic Wind rocket sled, only to be slammed to a stop in barely a second. The experiment put him on the cover of Time magazine and allowed his swashbuckling team to gather the data needed to revolutionize automobile and aircraft design. But Stapp didn’t stop there. From the legendary high-altitude balloon tests that ensued to the ferocious battles for car safety legislation, Craig Ryan’s book is as much a history of America’s transition into the Jet Age as it is a biography of the man who got us there safely.
Read More
A beautifully presented and admiring portrait of Stapp…. Mr. Ryan demonstrates a gift for making the complex science of Stapp’s experiments understandable, and he is equally skilled at capturing the spirit of his subject.—Patrick Cooke, Wall Street Journal

Compelling and compulsively readable…a curious but charming tale, the story of a man who courted danger—and death—in the ultimate pursuit of safety. Sonic Wind is an engrossing read, and Ryan brings his unlikely hero to life, deftly describing Stapp’s missionary zeal—inherited, presumably, from his parents—for safety. —Emily Anthes, Washington Post

[The] remarkable, almost-forgotten story of an aerospace pioneer. …Ryan's full-length biography uncovers the private man, Stapp's offbeat sense of humor, his awkward love life, his passion for classical music, and his friendships with daring test pilots Chuck Yeager and Joe Kittinger, fellow trailblazers whose fame has persisted. A consistently fine appreciation of the medical maverick who, as much as any other, helped make the Space Age possible.—Kirkus Reviews, Starred Review