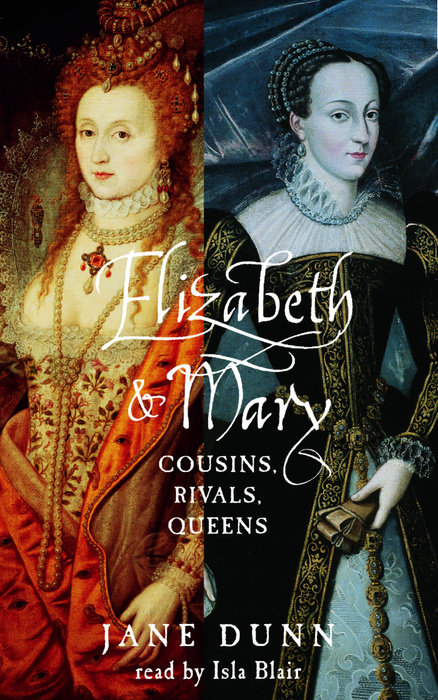 The first dual biography of two of the world’s most remarkable women—Elizabeth I of England and Mary Queen of Scots—by one of Britain’s “best biographers” (The Sunday Times).

In a rich and riveting narrative, Jane Dunn reveals the extraordinary rivalry between the regal cousins. It is the story of two queens ruling on one island, each with a claim to the throne of England, each embodying dramatically opposing qualities of character, ideals of womanliness (and views of sexuality) and divinely ordained kingship.
As regnant queens in an overwhelmingly masculine world, they were deplored for their femaleness, compared unfavorably with each other and courted by the same men. By placing their dynamic and ever-changing relationship at the center of the book, Dunn illuminates their differences. Elizabeth, inheriting a weak, divided country coveted by all the Catholic monarchs of Europe, is revolutionary in her insistence on ruling alone and inspired in her use of celibacy as a political tool—yet also possessed of a deeply feeling nature. Mary is not the romantic victim of history but a courageous adventurer with a reckless heart and a magnetic influence over men and women alike. Vengeful against her enemies and the more ruthless of the two queens, she is untroubled by plotting Elizabeth’s murder. Elizabeth, however, is driven to anguish at finally having to sanction Mary’s death for treason. Working almost exclusively from contemporary letters and writings, Dunn explores their symbiotic, though never face-to-face, relationship and the power struggle that raged between them.

A story of sex, power and politics, of a rivalry unparalleled in the pages of English history, of two charismatic women—told in a masterful double biography.
Read More
“A perceptive, suspenseful account of complex English history. . . . By the end of this satisfying book, one feels sympathy for both women, brave queens in an age when ‘no one considered that a woman could effectively rule alone.’ ” —The New York Times Book Review

“Elegant. . . . Dunn demythologizes Elizabeth and Mary. In humanizing their dynamic and shifting relationship, Dunn describes it as fueled by both rivalry and their natural solidarity as women in an overwhlemingly masculine world.” --Boston Herald

“A wholly engrossing and sumptuous retelling of a tale that entered legend even before its protagonists were dead.” --Newsday