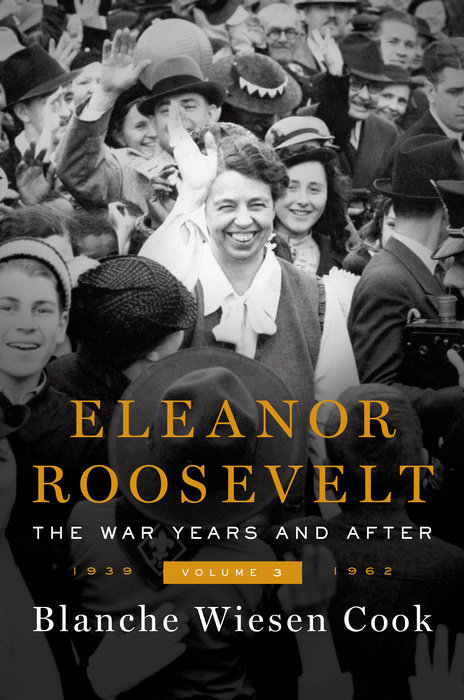 "Heartachingly relevant...the Eleanor Roosevelt who inhabits these meticulously crafted pages transcends both first-lady history and the marriage around which Roosevelt scholarship has traditionally pivoted." -- The Wall Street Journal

The final volume in the definitive biography of America's greatest first lady.


Historians, politicians, critics, and readers everywhere have praised Blanche Wiesen Cook’s biography of Eleanor Roosevelt as the essential portrait of a woman who towers over the twentieth century. The third and final volume takes us through World War II, FDR’s death, the founding of the UN, and Eleanor Roosevelt’s death in 1962. It follows the arc of war and the evolution of a marriage, as the first lady realized the cost of maintaining her principles even as the country and her husband were not prepared to adopt them. Eleanor Roosevelt continued to struggle for her core issues—economic security, New Deal reforms, racial equality, and rescue—when they were sidelined by FDR while he marshaled the country through war. The chasm between Eleanor and Franklin grew, and the strains on their relationship were as political as they were personal. She also had to negotiate the fractures in the close circle of influential women around her at Val-Kill, but through it she gained confidence in her own vision, even when forced to amend her agenda when her beliefs clashed with government policies on such issues as neutrality, refugees, and eventually the threat of communism. These years—the war years—made Eleanor Roosevelt the woman she became: leader, visionary, guiding light. FDR’s death in 1945 changed her world, but she was far from finished, returning to the spotlight as a crucial player in the founding of the United Nations.

This is a sympathetic but unblinking portrait of a marriage and of a woman whose passion and commitment has inspired generations of Americans to seek a decent future for all people. Modest and self-deprecating, a moral force in a turbulent world, Eleanor Roosevelt was unique.
Read More
“[T]he completion of Blanche Wiesen Cook’s monumental and inspirational life of Eleanor Roosevelt [series] is a notable event. . . . Volume 3 continues the story of Eleanor’s ‘journey to greatness.’ Keeping the focus on her actions and reactions, Cook skillfully narrates the epic history of the war years.”
—The New York Times Book Review

“A monumental biography [and] an exhilarating story, as well as undeniably melancholy one. In her relentless efforts to push American democracy to fulfill its promises, Eleanor Roosevelt was ahead of her time. As we ponder our curdled political culture . . . it’s not at all clear that we have yet caught up to her.”
—Maureen Corrigan, NPR’s Fresh Air

“More than a presidential spouse, however, or feminist icon, the Eleanor Roosevelt who inhabits these meticulously crafted pages transcends both first-lady history and the marriage around which Roosevelt scholarship has traditionally pivoted.”
—The Wall Street Journal

“The final installment in Blanche Wiesen Cook’s trilogy of biographies of Eleanor Roosevelt . . . finds the first lady increasingly comfortable in her own skin. . . . As these remarkable volumes chronicle, Roosevelt found her voice and her calling as an advocate—for peace, women’s rights, and the disadvantaged.”
—O, the Oprah Magazine

“[R]eads like the great history that it is . . . The monumental achievement of this current volume . . . is the rich depiction of the period’s contextual history.”
—San Francisco Chronicle

“In the third and final volume of Blanche Wiesen Cook’s magisterial biography of ER . . . [Cook’s] perspective, through ER’s eyes, is vigorous and fresh, the comparisons with our own darkening world subtle and yet potent.”
—Minneapolis Star Tribune

“[A] sweeping and detailed look at the first lady about whom more books have been written than any other, with the exception of Jacqueline Kennedy. . . . Today, she is acclaimed not only as an inspirational first lady of the United States but also of the world—and as one of the 20th century’s great humanitarians. Cook’s trilogy, and this volume in particular, eloquently defines her legacy and its continuing relevance.”
—Richmond Times-Dispatch

“Magisterial . . . Cook captures the headlong energy of those years perfectly. Readers will encounter in these pages an intimate, touchingly human Eleanor Roosevelt—an icon they can both admire and genuinely like.”
—Christian Science Monitor

“[E]xhaustively researched and beautifully written . . . gives us a sympathetic but very human portrait of this ‘First Lady of the World’. . . . Anyone interested in the life of this towering figure in 20th-century history will want to read this book.”
—BookPage

“Illuminating . . . A magnificent capstone to Cook’s decades-long evaluation of Eleanor Roosevelt.”
—BBC.com’s Between the Lines

“[F]ascinating reading, and . . . highlights for students of history how the world has changed since [Eleanor Roosevelt]’s time. And how it has not.”
—Booklist (starred review)

“Outstanding . . . A winning concluding volume in a series that does for Eleanor Roosevelt what Robert Caro has done for Lyndon Johnson.”
—Kirkus Reviews (starred review)

“Superb . . . Cook skillfully weaves her subject’s active and emotional life among friends and family members into the depiction of her public role.”
—Publishers Weekly

Making HERstory: First Ladies of the United States on Audio10 Audiobooks About Notable Women in History 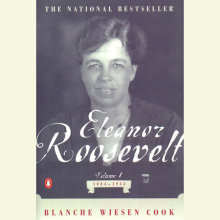