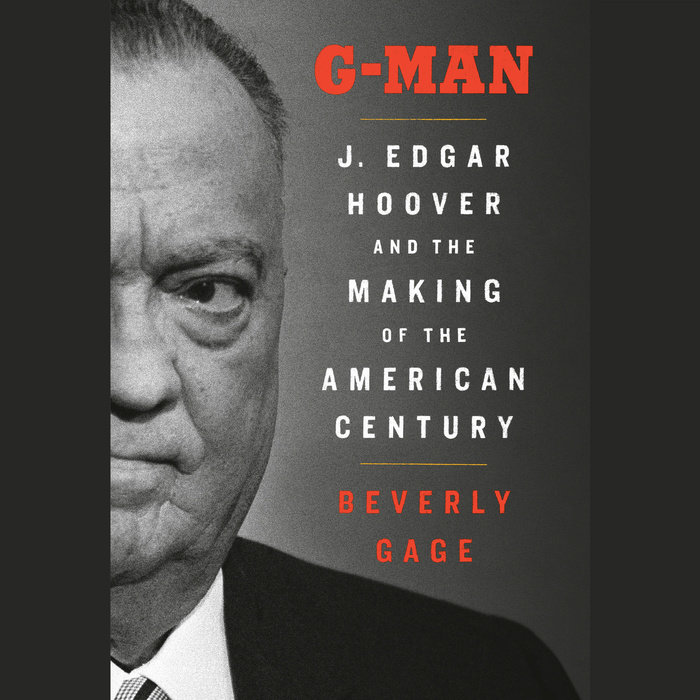 Written by: Beverly Gage
20 Hours Imprint: Penguin Audio Genre: Biography & Autobiography - Political Release Date: November 22, 2022
A major new biography of J Edgar Hoover that draws from never-before-seen sources to create a groundbreaking portrait of a colossus who dominated half a century of American history and planted the seeds for much of today's conservative political landscape.

We remember him as a bulldog--squat frame, bulging wide-set eyes, fearsome jowls--but in 1924, when he became director of the FBI, he had been the trim, dazzling wunderkind of the administrative state, buzzing with energy and big ideas for reform. He transformed a failing law-enforcement backwater, riddled with scandal, into a modern machine. He believed in the power of the federal government to do great things for the nation and its citizens. He also believed that certain people--many of them communists or racial minorities or both-- did not deserve to be included in that American project. Hoover rose to power and then stayed there, decade after decade, using the tools of state to create a personal fiefdom unrivaled in U.S. history.

Beverly Gage’s monumental work  explores the full sweep of Hoover’s life and career, from his birth in 1895 to a modest Washington civil-service family through his death in 1972. In her  nuanced and definitive portrait, Gage shows how Hoover was more than a one-dimensional tyrant and schemer who strong-armed the rest of the country into submission. As FBI director from 1924 through his death in 1972, he was a confidant, counselor, and adversary to eight U.S. presidents, four Republicans and four Democrats.  Franklin Roosevelt and Lyndon Johnson did the most to empower   him, yet his closest friend among the eight was fellow anticommunist warrior Richard Nixon.  Hoover was not above blackmail and intimidation, but he also embodied conservative values ranging from anticommunism to white supremacy to a crusading and politicized interpretation of Christianity. This garnered him the admiration of millions of Americans. He stayed in office for so long because many people, from the highest reaches of government down to the grassroots, wanted him there and supported what he was doing, thus creating the template that the political right has followed to transform its party.

G-Man places Hoover back where he once stood in American political history--not at the fringes, but at the center--and uses his story to explain the trajectories of governance, policing, race, ideology, political culture, and federal power as they evolved over the course of the 20th century.
Read More
"Beverly Gage has created a masterwork of biography that reveals the contradictions of the American Century through a man who embodied nearly all of them. Those seeking to understand the conservative movement, American authoritarianism and backlash to progress will find much here, as will those interested in liberalism and the transformative power of government. "
-Heather McGhee, author of The Sum of Us: What Racism costs everyone and how we can prosper together

“An incomparable portrait of one of the most influential and reviled figures in American history. In stunning detail, Beverly Gage presents J. Edgar Hoover’s complex life and career within the wider political contexts and cultural value systems that facilitated his rise to power—and his notorious, often discriminatory abuses of that power—as FBI director for nearly a half century. This extraordinary biography raises critical questions about the scope of police authority, the contours of citizenship, and the limits of democracy that strongly resonate."
-Elizabeth Hinton, author of America on Fire: The Untold History of Police Violence and Black Rebellion Since the 1960s

"Good biographers know that their first obligation is to understand their subject, and only then to commend or condemn.  That's long seemed impossible for J. Edgar Hoover, who shrouded himself in secrecy while publicizing the organization he led.  Beverly Gage, however, has found her way, triumphantly, through Hoover's contradictions.  G-Man is rigorously researched, vividly written, and, most remarkably, fair.  It will long remain the definitive account.”
-- John Lewis Gaddis, author of George F. Kennan:  An American Life

“What hath Hoover wrought? No one has answered that question as exhaustively or as astutely as the inimitable Beverly Gage. Hoover, at long last, has met his match. G-Man is unflinching, incisive, and riveting, part biography, part political thriller, and much more: an essential new history of twentieth-century America.
—Jill Lepore, author of These Truths: A History of the United States

“Essential reading for those who care about government power and constraint—which should be all of us. In clear, accessible writing, Beverly Gage offers a thorough and fair-minded appraisal of the twentieth century's most powerful American, one whose legacy and shadow still hang over Washington. We should know this history, or be condemned to repeat it."
—James Comey, former director, FBI, and author of A Higher Loyalty: Truth, Lies, and Leadership
Read More