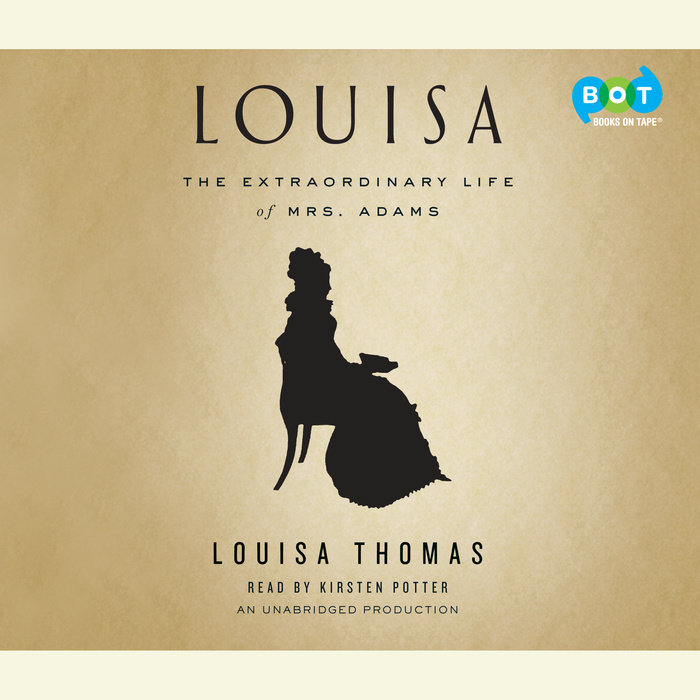 Written by: Louisa Thomas
Read by: Kirsten Potter
15 Hours and 42 Minutes Imprint: Penguin Audio Genre: Biography & Autobiography - Women Release Date: April 05, 2016
From the author of Mind and Matter, an intimate portrait of Louisa Catherine Adams, the wife of John Quincy Adams, who witnessed firsthand the greatest transformations of her time

Born in London to an American father and a British mother on the eve of the Revolutionary War, Louisa Catherine Johnson was raised in circumstances very different from the New England upbringing of the future president John Quincy Adams, whose life had been dedicated to public service from the earliest age. And yet John Quincy fell in love with her, almost despite himself. Their often tempestuous but deeply close marriage lasted half a century.

They lived in Prussia, Massachusetts, Washington, Russia, and England, at royal courts, on farms, in cities, and in the White House. Louisa saw more of Europe and America than nearly any other woman of her time. But wherever she lived, she was always pressing her nose against the glass, not quite sure whether she was looking in or out. The other members of the Adams family could take their identity for granted—they were Adamses; they were Americans—but she had to invent her own. The story of Louisa Catherine Adams is one of a woman who forged a sense of self. As the country her husband led found its place in the world, she found a voice. That voice resonates still.

In this deeply felt biography, the talented journalist and historian Louisa Thomas finally gives Louisa Catherine Adams's full extraordinary life its due. An intimate portrait of a remarkable woman, a complicated marriage, and a pivotal historical moment, Louisa Thomas's biography is a masterful work from an elegant storyteller.
Read More
“[A] lushly detailed, authoritative book.” —Smithsonian.com

“Thomas has written an insightful, compassionate portrait of a young girl expected to be prim and passive, who grew into a strong woman, an avid writer, and shrewd political partner. Readers of biography will find Thomas’s book engaging as well as educating.”—Historical Novels Reviews

“Subtitled ‘The extraordinary life of Mrs. Adams,’ this biography does not fail to meet the expectations it sets. Overall, Louisa is a crisply written, accessible biography that feels authentic to the lives of women at the time and paints a vivid and engrossing portrait of the sixth First Lady of the United States.”—Book Browse

“Louisa Catherine’s long years of living in the shadow of her husband’s career choices and of the Adams dynasty diminished her own image. Thomas rescues her subject by giving Louisa Catherine her own voice, but also by making this a love story.” —San Francisco Chronicle

“A pleasure to read….Louisa manages the difficult balance of exploring [Louisa Adams’s] life as the partner of a prominent public man without letting him hijack the narrative….feelings, questions and doubt formed the core dynamic of her life, and Louisa admirably captures that murky mental landscape. In doing so, it fulfills one of her innermost goals: It shows her to be a woman who was.”—The New York Times Book Review

“A rich and thorough look at our country’s only foreign-born first lady.”—Minneapolis Star Tribune

“Yes, that is why historical biographies are a hard nut to crack. One may know most of the story or all of the story, or one may not even think the story is worth the effort. But great writing is always worth the journey into the past, into a country discovering who it was. This is a life of Louisa Adams; Louisa Thomas gives that life a heart.” — San Diego Book Review

“Louisa Adams consumes us as a demure yet dazzling woman, a somewhat overlooked first lady who is as vulnerable and fragile as she is complex and spirited. One cannot get enough of her. The other treat…is the extraordinary voice of the author. Thomas’s unusual, enchanting choice of words together with her subject’s strenuous and glamorous life, make this book an unlikely page turner.” —American History

“As journalist and historian Thomas reveals in her comprehensive and fascinating biography, Adams was an admirable and extraordinary woman. Thomas examines the life and evolving character of Adams through the prism of her nation’s own development and quest for a national identity… Thomas has written an excellent account of the life of this woman, who certainly merits greater attention and praise.” —Booklist, *starred*

“A detailed and sensitive narrative, empathizing with Louisa’s unorthodox life…. Thomas uses unpublished diaries along with memoirs to show how Louisa managed in a complicated but intimate 50-year marriage; endured the physical hardships of frequent travel, personal illness, and long periods of separation from her children; and charted a course as a political wife in an age when women were expected to eschew politics….immensely readable.” —Library Journal

“In this elegant, sweeping biography….Thomas wisely avoids the ‘behind every great man’ canard, acknowledging that while Louisa’s help was essential to John Quincy’s career, of greater importance are the ways in which she learned about herself and the world and developed her own voice.” —Publishers Weekly

“In addition to being thoroughly grounded in a wide range of source material, Louisa also brims with intelligence and pith. This is the most effortlessly readable life of Louisa Adams that has yet appeared…. one of the best First Lady biographies in an increasingly competitive field.”—Open Letters Monthly

“In this engaging and well-researched biography, writer and historian Louisa Thomas rescues a former first lady from near obscurity….Louisa is a fascinating portrait of a complex woman, her sometimes tumultuous marriage and the extraordinary era in which she lived.” —BookPage


“The thrilling, improbable life of our only foreign-born First Lady, to whom Quincy, Massachusetts seemed more exotic than Tsar Alexander’s St. Petersburg.  If, as Louisa Thomas makes splendidly clear, being born an Adams was difficult, marrying one was yet more so.  Louisa Catherine Adams knew how to please her husband (study Cicero), as well as how to displease him (wear rouge); we come to admire her on both counts in this nuanced, beautifully crafted portrait.”—Stacy Schiff, Pulitzer Prize-winning author of The Witches, Cleopatra, and A Great Improvisation

“Louisa Thomas has written a beautiful, wise, and compelling book about a member of America's Adams clan who may just be the most interesting Adams of them all. Rigorously researched and written with grace, conviction, and insight, Louisa is a marvelous achievement by a biographer from whom we shall be hearing for decades to come. For that in general and for this book in particular we should all be grateful indeed.”—Jon Meacham, Pulitzer Prize-winner and bestselling author of American Lion, Franklin and Winston, and Thomas Jefferson: The Art of Power

“You will want to read every word of Louisa--Louisa Thomas’s dazzling portrait of first-lady Louisa Catherine Adams and her complicated marriage to America’s sixth president, John Quincy, a man who believed ‘women had nothing to do with politics,’ yet permitted his wife to  wage a ‘campaigne’ in private salons and ballrooms that led to his election.  Chances are good that no first lady was unhappier in the White House than Louisa Catherine Adams, but hers was a long life of surprising adversity and high adventure, every chapter of which Thomas relates with brilliant sympathy and insight.”—Megan Marshall, Pulitzer Prize-winning author of Margaret Fuller: A New American Life

“For a long time I have been waiting for a biographer with sufficient style and emotional range to tell the quite extraordinary story of Louisa Catherine Adams in all its splendor and sadness.  Louisa has been worth the wait.” —Joseph J. Ellis, Pulitzer Prize-winning author of The Quartet and First Family: Abigail and John Adams

“This lyrical and deeply personal tale gives a fascinating glimpse of America at a transformational moment. But more than that, it's a timeless book about what it means to be a woman, how to invent your own personal identity, and how to have the self-awareness and faith to find what to live for and why. These are lessons just as valuable for our fast-changing age as they were for that of Louisa Adams.” —Walter Isaacson, author of The Innovators: How a Group of Hackers, Geniuses, and Geeks Created the Digital Revolution, Steve Jobs and Benjamin Franklin: An American Life
Read More