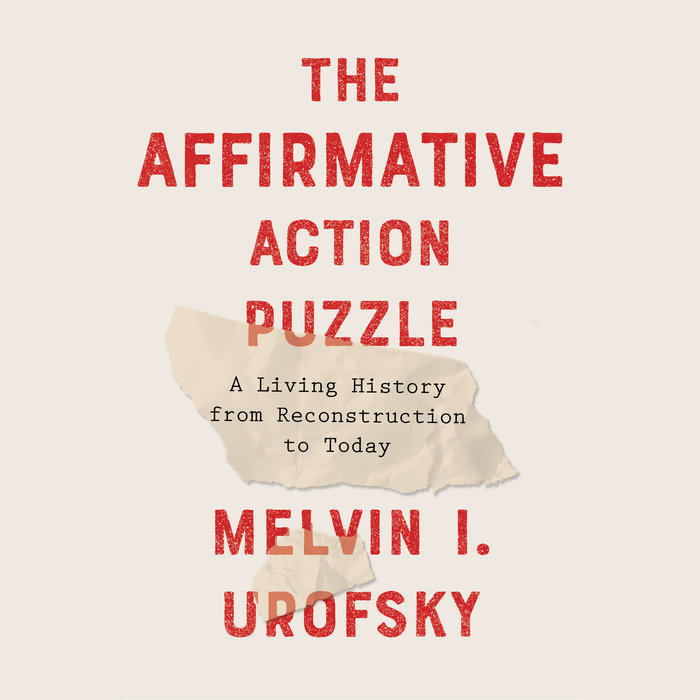 A rich, multifaceted history of affirmative action from the Civil Rights Act of 1866 through today’s tumultuous times

From acclaimed legal historian, author of a biography of Louis Brandeis (“Remarkable” —Anthony Lewis, The New York Review of Books, “Definitive”—Jeffrey Rosen, The New Republic) and Dissent and the Supreme Court (“Riveting”—Dahlia Lithwick, The New York Times Book Review), a history of affirmative action from its beginning with the Civil Rights Act of 1866 to the first use of the term in 1935 with the enactment of the National Labor Relations Act (the Wagner Act) to 1961 and John F. Kennedy’s Executive Order 10925, mandating that federal contractors take “affirmative action” to ensure that there be no discrimination by “race, creed, color, or national origin” down to today’s American society.

Melvin Urofsky explores affirmative action in relation to sex, gender, and education and shows that nearly every public university in the country has at one time or another instituted some form of affirmative action plan--some successful, others not.

Urofsky traces the evolution of affirmative action through labor and the struggle for racial equality, writing of World War I and the exodus that began when some six mil­lion African Americans moved northward between 1910 and 1960, one of the greatest internal migrations in the country’s history.

He describes how Harry Truman, after becoming president in 1945, fought for Roosevelt’s Fair Employment Practice Act and, surprising everyone, appointed a distinguished panel to serve as the President’s Commission on Civil Rights, as well as appointing the first black judge on a federal appeals court in 1948 and, by executive order later that year, ordering full racial integration in the armed forces.

In this important, ambitious, far-reaching book, Urofsky writes about the affirmative action cases decided by the Supreme Court: cases that either upheld or struck down particular plans that affected both governmental and private entities. We come to fully understand the societal impact of affirmative action: how and why it has helped, and inflamed, people of all walks of life; how it has evolved; and how, and why, it is still needed.

“By the accumulation of sixty years’ worth of evidence, [The Affirmative Action Puzzle] allows us to reach some useful conclusions, and the most important of these is that affirmative action worked.”
—Louis Menand, The New Yorker

“Urofsky leads us to consider how law should best combat the legacies of racism, sexism, and ableism in order to open doors of opportunity to previously excluded groups. A thought-provoking read.”
—Library Journal

“Comprehensive . . . A must-read for anyone interested in the history of affirmative action and its associated legal conundrums.”
—Kirkus

“A magnificent book! The definitive history of affirmative action in the United States. A balanced approach to one of the most controversial legal and social issues, written in a clear, accessible, engaging manner. A ‘must read’ for all interested in the ongoing debate about affirmative action.”
—Erwin Chemerinsky, Dean; Jesse H. Choper Distinguished Professor of Law, University of California, Berkeley School of Law