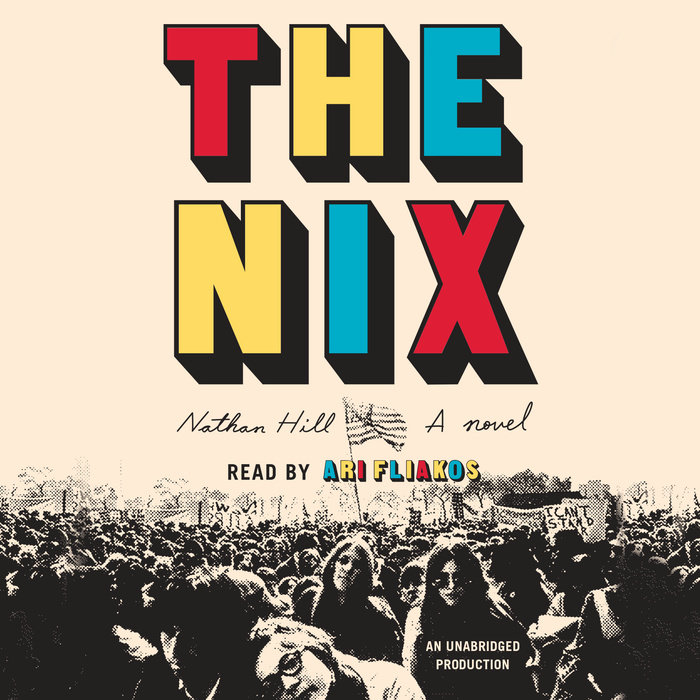 “The Nix is a mother-son psychodrama with ghosts and politics, but it’s also a tragicomedy about anger and sanctimony in America. . . .  Nathan Hill is a maestro.” —John Irving

From the suburban Midwest to New York City to the 1968 riots that rocked Chicago and beyond, The Nix explores—with sharp humor and a fierce tenderness—the resilience of love and home, even in times of radical change.

It’s 2011, and Samuel Andresen-Anderson—college professor, stalled writer—has a Nix of his own: his mother, Faye. He hasn’t seen her in decades, not since she abandoned the family when he was a boy. Now she’s re-appeared, having committed an absurd crime that electrifies the nightly news, beguiles the internet, and inflames a politically divided country. The media paints Faye as a radical hippie with a sordid past, but as far as Samuel knows, his mother was an ordinary girl who married her high-school sweetheart. Which version of his mother is true? Two facts are certain: she’s facing some serious charges, and she needs Samuel’s help.

To save her, Samuel will have to embark on his own journey, uncovering long-buried secrets about the woman he thought he knew, secrets that stretch across generations and have their origin all the way back in Norway, home of the mysterious Nix. As he does so, Samuel will confront not only Faye’s losses but also his own lost love, and will relearn everything he thought he knew about his mother, and himself.
Read More
“If any novel defied an elevator pitch in 2016, it was The Nix. Acid critique of millennial entitlement, videogame addiction, and clueless academia; tender meditation on childhood friendship, first loves, and maternal abandonment; handy tutorial on ’60s radicalism and Norwegian ghost mythology: Nathan Hill’s magnificently overstuffed debut contains multitudes, and then some. . . .  the story surges, ricocheting from sleepy ’80s suburbia and the 1968 DNC riots to WWII-era Norway, post-9/11 Iraq, and beyond. It’s not just that Hill is a brilliantly surreal social satirist in the gonzo mode of Don DeLillo or Thomas Pynchon (a male news anchor’s face is ‘smooth as cake fondant’; one doomed union is ‘like a spoon married to a garbage disposal’), it’s that he does it all with so much wit and style and heart.” —Leah Greenblatt, Entertainment Weekly (Best Book of 2016)

“A fantastic novel about love, betrayal, politics and pop culture—as good as the best Michael Chabon or Jonathan Franzen.” —People

“It broke my heart, this book. Time after time. It made me laugh just as often. I loved it on the first page as powerfully as I did on the last.” —Jason Sheehan, NPR.org

“Hill has so much talent to burn that he can pull of just about any style, imagine himself into any person and convincingly portray any place or time. The Nix is hugely entertaining and unfailingly smart, and the author seems incapable of writing a pedestrian sentence or spinning a boring story. . . . [A] supersize and audacious novel of American misadventure.” —Teddy Wayne, The New York Times Book Review

“Irresistible. . . . A major new comic novelist . . . . Hill is a sharp social observer, hyper-alert to the absurdities of modern life. . . . his enormous book arrives as one of the stars of the fall season. . . . readers will find this novel. And they’ll be dazzled.” —Ron Charles, The Washington Post

“Hill is an uncommonly profound observer, illuminating much about the relationships between parents and children. . . . Nathan Hill is an important new writer, able to variously make readers laugh out loud while providing a melancholy, resonant tale.” —Eliot Schrefer, USA Today (4/4 Stars)

"[A] great sprawling feast of a first novel. . . . Hill writes with an astonishingly sure hand for a young author. . . . let's just call him the real thing." —Dan Cryer, Newsday
Read More