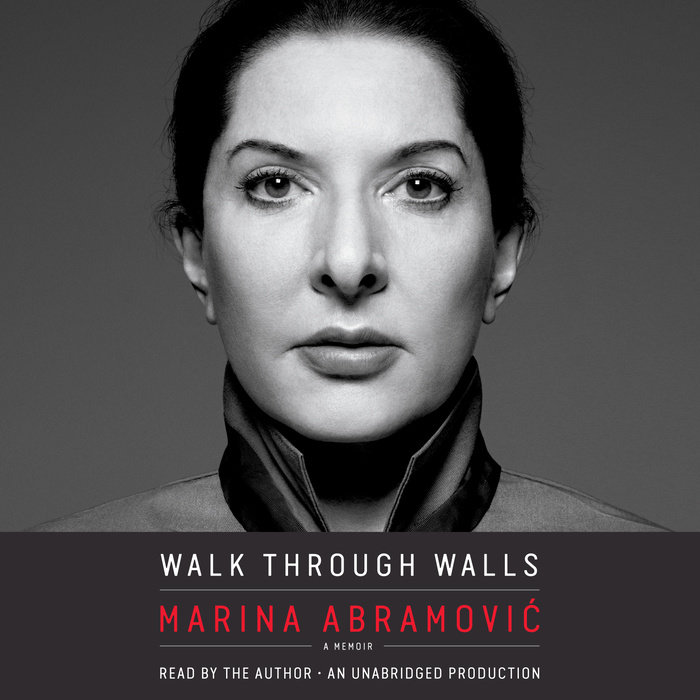 Written by: Marina Abramovic
Read by: Marina Abramovic
14 Hours and 57 Minutes Imprint: Random House Audio Genre: Biography & Autobiography - Personal Memoirs Release Date: October 25, 2016
“I had experienced absolute freedom—I had felt that my body was without boundaries, limitless; that pain didn’t matter, that nothing mattered at all—and it intoxicated me.”

In 2010, more than 750,000 people stood in line at Marina Abramović’s MoMA retrospective for the chance to sit across from her and communicate with her nonverbally in an unprecedented durational performance that lasted more than 700 hours. This celebration of nearly fifty years of groundbreaking performance art demonstrated once again that Marina Abramović is truly a force of nature.

The child of Communist war-hero parents under Tito’s regime in postwar Yugoslavia, she was raised with a relentless work ethic. Even as she was beginning to build an international artistic career, Marina lived at home under her mother’s abusive control, strictly obeying a 10 p.m. curfew. But nothing could quell her insatiable curiosity, her desire to connect with people, or her distinctly Balkan sense of humor—all of which informs her art and her life. The beating heart of Walk Through Walls is an operatic love story—a twelve-year collaboration with fellow performance artist Ulay, much of which was spent penniless in a van traveling across Europe—a relationship that began to unravel and came to a dramatic end atop the Great Wall of China.

Marina’s story, by turns moving, epic, and dryly funny, informs an incomparable artistic career that involves pushing her body past the limits of fear, pain, exhaustion, and danger in an uncompromising quest for emotional and spiritual transformation. A remarkable work of performance in its own right, Walk Through Walls is a vivid and powerful rendering of the unparalleled life of an extraordinary artist.
Read More
"Candidly and vividly sharing her personal struggles as well as her artistic and spiritual discoveries, Abramovic presents a uniquely intense and affecting art memoir."—Booklist, starred review

“Enchanting and emotionally raw, Walk Through Walls is an honest, gripping, and profound look into the heart and brilliant mind of one of the quintessential artists of the postmodern era.”
—Publishers Weekly, starred review

“Marina has lived like an unstoppable force of nature, with the kind of power that leaves me feeling breathless and disquieted—while at the same time profoundly impressed, awed, and inspired. As I turn the pages of her book, I hear her voice in my head, as if she were actually narrating the words. When Marina speaks, it sounds as if you’re listening to a legendary folktale from the ancient landscapes of the Balkan Mountains. Her voice is soothing, calm, and centered. It belies the trauma, fear, and darkness coiled at the root of her impulse to express and expunge.” —Annie Lennox, Vanity Fair

“In her new memoir, Walk Through Walls, [Marina Abramović] exposes herself as provocatively and fearlessly in language as she has done for many years in her largely nonverbal performance art. Her page-turner of a narrative [is] at times shocking…genuinely moving, and always coruscatingly honest.” —Elle

“Walk Through Walls gives the impression that the phrase ‘real talk’ may have been coined solely for its author Marina Abramović. The provocative performance artist pulls no punches looking back over her rough childhood and prolific public career. But it’s not all dark recollections. There’s plenty of wry wit in her memoir as well, as she reveals insights into her various projects and processes.” —BUST

“Walk Through Walls testifies to larger struggles than those of a young, visionary performance artist in an object-oriented art world…It is hard not to read Abramović’s work as an unconscious enactment of upending patriarchal norms.” —Los Angeles Review of Books

“Abramović may be the only superstar performance artist in the world at the moment, and…the book itself has the veneer of an ambitious performance piece, as Abramović exposes her deepest personal wounds and places them next to her artistic triumphs, in order to create a kind of epic mythology around her work. The author turns blank pages into a museum of the self, cutting herself open for the sake of the narrative. But in Abramović’s case, the performance feels even more extreme. She has actually bled for her life story, onto pristine gallery floors….This Marina is the most charming one, the voice that makes Walk Through Walls propulsively readable.”—New Republic

"[Walk Through Walls] is really close to what it’s like to spend a weekend with her: Abramovic is funny, generous, and vituperative, a raconteur and comedian and the sometimes sad-sack hero of the epic tale of her mad life."—New York Magazine

“Marina’s role as an artist, she believes, with a hubris that can sound naïve and a humility that disarms any impulse to resent it, is to lead her spectators through an anxious passage to a place of release from whatever has confined them.” —Judith Thurman, The New Yorker

“Abramović’s story is thoroughly detailed, with brutally honest descriptions of her life and performance pieces, all providing deep insights into her work….an informative, eye-opening look at the larger world of art.”—Library Journal

"The memoir’s most powerful moments come when Abramović shares the most intimate details of the romantic heartaches she’s endured. Marina pulls no punches about the men she’s loved and the artist feels feels more present than ever."—Smithsonian Magazine

“Walk Through Walls reads as a frank and straightforward retelling of a life story…Where is the dividing line that separates life and art? That question, and tension, make this an electrifying read.” —BookPage

"...There is something intensely enthralling about Abramović’s simple, matter-of-factly candor in surveying, without belaboring, the traumatic formative experiences despite which — and, to a large extent, because of which — she became the person and artist she is."—Brainpickings

"Walk Through Walls is...as enthralling and powerful as [Marina's] career and work."—Riveter's

“Walk Through Walls is the story of a relentlessly independent artist thwarted in her quest for total connection with one person who eventually achieves it with thousands. Marina’s magic derives from an emerging ‘method’ that involves tests of endurance and deprivation more commonly associated with Navy Seal training than with the world of modern art. Just as her performances are impossible to turn away from, I could not put down this book.”
—Tom Reiss, Pulitzer and PEN award-winning author of The Black Count and The Orientalist

“Marina Abramović is famous for fiercely throwing herself, body and soul, into transformation through her art. In this intimate memoir, I hear her voice as I read. She confesses, confides, complains, instructs, and reflects with intelligence and humor on her difficult but ultimately magical life and liberating work.” —Willem Dafoe

“Abramović is the most celebrated performance/conceptual artist in the world, and she’s probably the only one with a sense of humor.” —Bryan Appleyard, Sunday Times UK

“Walk Through Walls is beautiful, panoramic, touching, deep. I really love and admire the way Marina confronts all the weird contradictions of myth mixing with daily life. She manages to say personal as well as self-critical things about herself while still making a self-portrait that is rich and full of real self-respect. What a life!” —Laurie Anderson

“In The Heart Sutra, Buddha says, ‘Our life on earth is like a morning star, a bubble on water, a drop of dew, lightning in the summer sky, a dream in this floating world.’ For Marina Abramović, there is no difference between art and life, life is a dream while it lasts, an absolute presence made ​​in a vacuum.” —Alejandro Jodorowsky
Read More