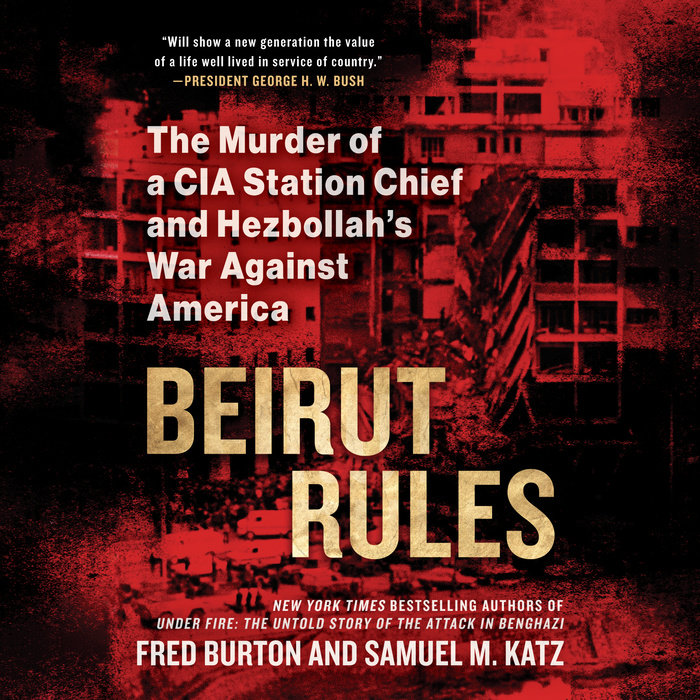 After a deadly terrorist bombing at the American embassy in Lebanon in 1983, only one man inside the CIA possessed the courage and skills to rebuild the networks destroyed in the blast: William Buckley. But the new Beirut station chief quickly became the target of a young terrorist named Imad Mughniyeh.

Beirut Rules is the pulse-by-pulse account of Buckley's abduction, torture, and murder at the hands of Hezbollah terrorists. Drawing on never-before-seen government documents as well as interviews with Buckley's co-workers, friends and family, Burton and Katz reveal how the relentless search for Buckley in the wake of his kidnapping ignited a war against terror that continues to shape the Middle East to this day.
Read More


“In these pages, Fred Burton and Samuel Katz ably describe the selfless service and ultimate sacrifice of CIA’s William F. Buckley, murdered brutally while held as a hostage in Lebanon. Beirut Rules can’t bring this quiet hero back to life. But it will show a new generation the value of a life well lived in service of country.”—President George H. W. Bush

“Beirut Rules is a masterpiece of intelligence writing. I cannot think of any book on spying that I have read that has impressed me more in terms of its writing quality and research. I didn’t think the details of this story could ever be told, but Burton and Katz have done it...and done it beautifully. Bill Buckley was a hero and inspiration for all of us in the CIA, and I am grateful that the authors have honored his memory by presenting his life and sacrifice to the American public. Be prepared to be moved to tears, as I was.”—James M. Olson, former chief of CIA counterintelligence and author of Fair Play: The Moral Dilemmas of Spying

“Burton and Katz have provided the definitive account of the extraordinary life, and tragic death, of CIA officer William Buckley. It’s a vivid reminder of the risks willingly accepted by intelligence and military personnel each and every day. . . .[A] must read for anyone interested in deconstructing the convoluted story of how the US found itself mired in an unwinnable situation in the Middle East.”—Dr. Vince Houghton, historian and curator of the International Spy Museum

“An unparalleled journey into Beirut’s brutal 1980s, bringing into sharp prospect the gritty, layered, underground battles in that storied city. Beirut Rules gives depth and texture to the players on all sides of the drama surrounding the ruthless murder of the CIA station chief, William F. Buckley. The expertise and insider knowledge of the coauthors permeate every page and combine to make this yarn not only a captivating read but an invaluable historical document. There isn’t anything better on the lonely death of Bill Buckley, an American of uncommon courage.”—Milt Bearden, thirty-year veteran of the CIA and coauthor of The Main Enemy

"An unprecedented look inside the intrigue, treachery, and sheer brutality of the spy wars of the 1980s. A must read for those trying to make sense about the Middle East of years ago as well as what's happening there today." -- Israeli investigative journalist Ronen Bergman

"It's a bracing read detailing our decades of failure in tackling Islamic terrorism."-- The Federalist

Praise for Under Fire: The Untold Story of the Attack in Benghazi

“Tells the story of a Washington too blinded by politics to see the facts. A wonderful book.”—Robert Baer, New York Times bestselling author of See No Evil