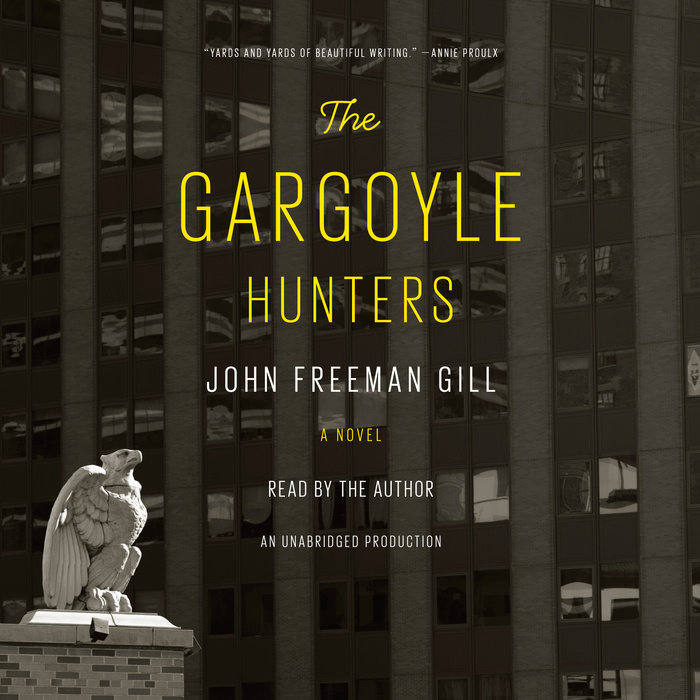 Hilarious and poignant, The Gargoyle Hunters is a love letter to a vanishing city, and a deeply emotional story of fathers and sons. Intimately portraying New York’s elbow-jostling relationship with time, the novel solves the mystery of a brazen and seemingly impossible architectural heist—the theft of an entire historic Manhattan building—that stunned the city and made the front page of The New York Times in 1974.

With both his family and his city fracturing, thirteen-year-old Griffin Watts is recruited into his estranged father’s illicit and dangerous architectural salvage business. Small and nimble, Griffin is charged with stealing exuberantly expressive nineteenth-century architectural sculptures—gargoyles—right off the faces of unsung tenements and iconic skyscrapers all over town. As his father explains it, these gargoyles, carved and cast by immigrant artisans during the city’s architectural glory days, are an endangered species in this era of sweeping urban renewal.
Desperate both to connect with his father and to raise cash to pay the mortgage on the brownstone where he lives with his mother and sister, Griffin is slow to recognize that his father’s deepening obsession with preserving the architectural treasures of Beaux Arts New York is also a destructive force, imperiling Griffin’s friendships, his relationship with his very first girlfriend, and even his life.
As his father grows increasingly possessive of both Griffin’s mother and his scavenged touchstones of the lost city, Griffin must learn how to build himself into the person he wants to become and discover which parts of his life can be salvaged—and which parts must be let go. Maybe loss, he reflects, is the only thing no one can ever take away from you.
Tender, funny, and achingly sad, The Gargoyle Hunters introduces an extraordinary new novelist.


“The Gargoyle Hunters is wonderful, strong, funny, with yards and yards of beautiful writing. Its pages are full of reading pleasures… Extraordinary.”
—Annie Proulx, Pulitzer Prize– and National Book Award–winning author of The Shipping News and "Brokeback Mountain"


“[An] unabashedly charming story …  What fantastic adventures these two have while creeping around and up New York buildings in the middle of the night, liberating ornaments that might fall by the wrecking ball tomorrow — or someday. There’s no job too risky that Watts won’t send his son tiptoeing out on a crumbling ledge, or crawling across a sagging board, or even dangling from a fraying rope to rescue an endangered gargoyle 50 stories off the ground. Looking back, Griffin realizes these were not ‘reasonable things for a grown man to ask of a thirteen-year-old boy who wanted only to get close to him,’ but at the time, he was thrilled. And frankly, so are we.”
—Ron Charles, Washington Post Book World


“In the spirit of Jonathan Lethem and J. D. Salinger, John Freeman Gill strips the mask off New York City in this poignant, incisive, irreverent novel about fatherhood, art, obsession, creation, and destruction. This novel salvages so many things, not least our abiding relationship with the past. This is a wonderful, compelling debut.”
—Colum McCann, National Book Award–winning author of Let the Great World Spin and TransAtlantic


“John Freeman Gill's The Gargoyle Hunters is a brilliant evocation of many things: the world of a thirteen-year-old boy, with its mixture of thoughtless destructiveness and wrenching emotion; a son’s relationship with a charismatic, architecture-loving, thieving father; the endless changes to timeless Manhattan during the crumbling, tumultuous 1970s. Funny, heartbreaking, elegiac, unforgettable—David Mitchell’s Black Swan Green meets E. B. White’s Here Is New York.”
—Gretchen Rubin, #1 New York Times best-selling author of The Happiness Project


“The Gargoyle Hunters is that rarest of all animals—a beautifully written literary novel that also just happens to be a rollicking, cinematic, ripsnortingly funny tale with action sequences as exciting as those of Hollywood’s best films. Ever wonder how a father and son could possibly steal an entire New York City building, cornice to curb? Here’s your chance to find out.”
—Doug Liman, director of The Bourne Identity, Mr. & Mrs. Smith, and Edge of Tomorrow


“A stellar debut … Gill, who is a noted expert on historical architecture, brings a DeLillo-like eye for detail to his descriptions of the city while also perfectly capturing the father-son relationship in all its warmth, hero-worship, and, ultimately, disappointment. A bildungsroman rich with symbolism, wistful memory, and unabashed longing, this is a remarkably tender love letter to a city and historical fiction par excellence. For fans of Donna Tartt and Colum McCann.”
—Booklist, starred review


“Seventies New York comes alive in The Gargoyle Hunters …  An ambitious, elegiac tale that gazes up at the greats … wholly original … There's more than enough page-turning action here for any reader to envision the movie adaptation, but back to the central virtue of this buzz-worthy book: the sentences. The screen can't capture those. … As Gill writes in the book's final chapter: ‘Any New Yorker who's paying attention will tell you that the city is a living, breathing organism at war with itself.’ Why do we stay? For stories like this.”
—The Village Voice

“Extravagantly satisfying … It held me, delighted me, and left me enthralled. Teems with the particular vitality of its time and place, yet it is never for one minute especially ‘nostalgic.’ It is stamped with the moods of Manhattan … and the flavors of the mid-1970s, and yet it seems … delightfully and commandingly strange. And it reads, like all the best novels do, as both the encapsulation of private, urgent experience and a radical, inscrutable transformation of the same.”
—The Los Angeles Review of Books


“People often say of New York, whenever you look up at the buildings, you’ll see something remarkable. You could say the same thing of the quality of the writing in The Gargoyle Hunters.… What is perhaps most striking—and visible on every page … is just how accomplished and sophisticated Gill’s writing is.”
—Omnivoracious: The Amazon Book Review


“For those who treasure the dappled beauty of New York’s early modern buildings, the plight to protect each cornice and filigree from the scourge of redevelopment is a rather high-stakes drama. It is simple, then, to grasp why The Gargoyle Hunters has been received with such delight.”
—The New Criterion


“Erudite, irreverent … With a fresh, wry narrative voice, Gill presents a vividly imagined slice of New York history, a quirky portrait of the 1970s and a tender father-son story--with plenty of gargoyles on the side.”
—Shelf Awareness


“Fast-paced … vividly portrayed … finely wrought … Gill’s affection for the city and the Seventies era is infectious.… The nail-biting, dramatic conclusion to the book … also includes a vertiginous trip to the tower atop the Woolworth Building for some misguided cultural preservation. If you suffer from vertigo skip this chapter. Its realistic description of dicing with death on the 53rd floor is not for the fainthearted.”
—The Tribeca Trib


“Shortly into Gill’s captivating and exuberant novel, one realizes that architectural crimes are merely the backdrop. This is a story about all varieties of nostalgia. Formalized urban nostalgia, of course, of the kind that drives landmark preservation … but also the constant pining for recognizable moments in a person’s life, both for the pleasures of our childhood and for the relationships that once held us in safety.… The novel [is] filled with charming and very specific anecdotes of teenage exuberance and wistful remembrance, dotted along the corridors of 1970s New York that you can almost follow along with on a dusty map.”
—The Bowery Boys


“Funny and touching… In much the same way that Donna Tartt and J. D. Salinger capture the city in their stories, Gill has made New York City one of his most vivid main characters. In mordant prose, he has taken a wrecking ball as much to the human heart as he has to the priceless gems of the city’s past.”
—Mary Morris, Anisfield-Wolf Book Award–winning author of The Jazz Palace


"In turns quirky and cunning, naïve and knowing, achingly sad and subtly comic Gill conjures visuals that will fill your mind and family drama that will haunt you, a combination that leaves you longing to experience Griffin’s lost New York."
—The Nervous Breakdown


"Zounds. The Gargoyle Hunters is one amazing novel about fatherhood, obsession, and of course, gargoyles."
—Caroline Leavitt, New York Times best-selling author of Is This Tomorrow


“Fans of Richard Russo will appreciate the complex dynamic between needy, young Griffin and his father, whose breezy affability masks profound, even abusive, flaws.… The Gargoyle Hunters is an absorbing family tale and a wise meditation on aging.”
—BookPage

This Is The Author | John Freeman GillFresh Voices for Spring