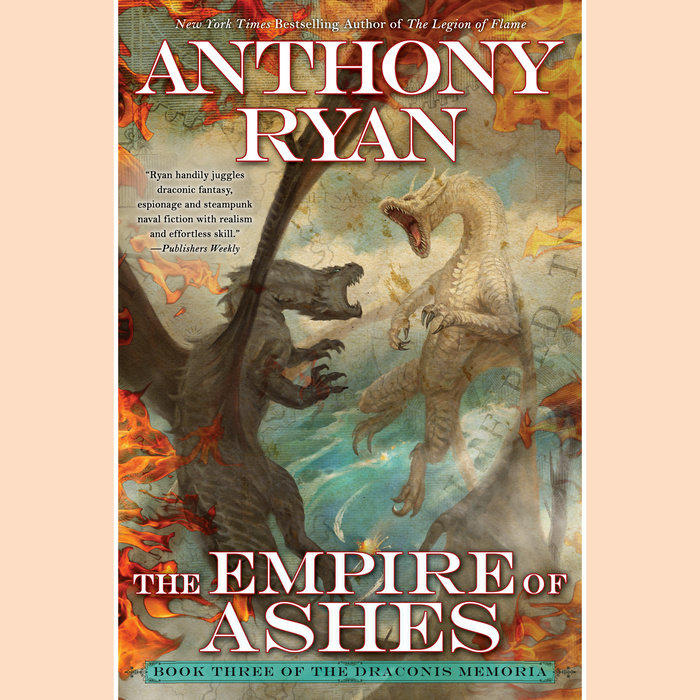 For hundreds of years, the Ironship Trading Syndicate was fueled by drake blood—and protected by the Blood-blessed, those few who could drink it and wield fearsome powers. But now the very thing that sustained the corporate world threatens to destroy it.

A drake of unimaginable power has risen, and it commands an army of both beasts and men. Rogue Blood-blessed Claydon Torcreek, Syndicate agent Lizanne Lethridge and Ironship captain Corrick Hilemore have been spread to disparate corners of the world, but they are united in their desire to defeat the White Drake and the Spoiled who follow it.

Humanity itself is at stake, but with the aid of ancient knowledge, revolutionary technology and unexpected allies, all hope is not lost. Saving the world will require sacrifice, as Clay, Lizanne and Hilemore will see all they know either consumed by flames or reborn from the ashes.
Read More
Praise for The Empire of Ashes


“Ryan skillfully navigates multiple narrators to unveil a world steeped in magic and on the brink of destruction. Both the characters and the setting are irresistible right through to the end.”—Publishers Weekly


"The series is action packed, full of intrigue, and just plain fun. Ryan deftly writes something for fans of dragons, steampunk, or gutsy characters (or all three). Readers of epic adventure fantasies like Game of Thrones should check this series out."—Booklist


Praise for The Draconis Memoria series

“The Waking Fire is part Indiana Jones, part Pirates of the Caribbean and part Mistborn. It’s got wonderful, memorable characters and great action...I loved it.”—Django Wexler, author of The Infernal

“A marvellous piece of imagination with plenty of twists, a refreshingly different setting and excellent world-building. A great read.”—Mark Lawrence, international bestselling author of Grey Sister

“I am barely able to contain my excitement for the next installment in the series, and continue to be impressed by Ryan’s growth as an author with each of his novels . . . Dragons, great characters and a fast-paced but intricate story.”—The Quill to Live

“Always impeccable, Anthony Ryan’s world-building skills do not fail to amaze. In the Draconis Memoria series, he completely immerses his readers in a steampunk-esque world where the struggle for survival is palpable.”—The Qwillery
Read More