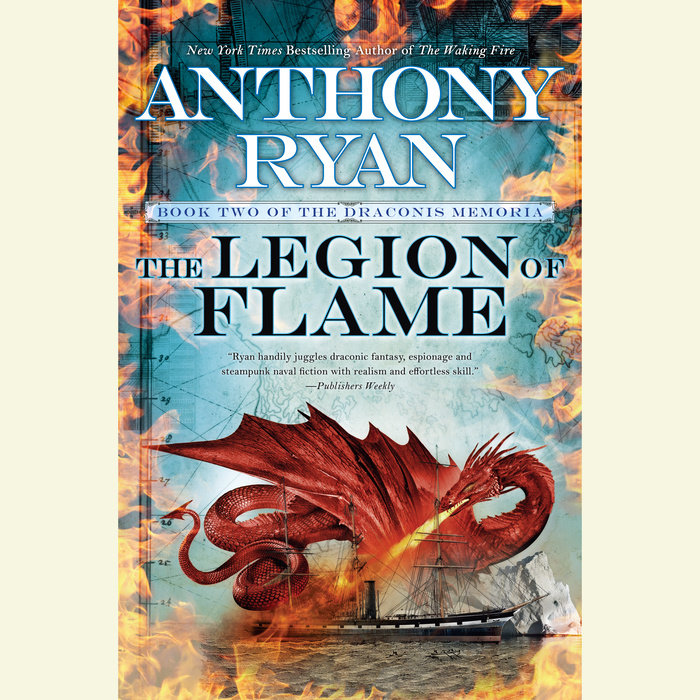 For centuries, the vast Ironship Trading Syndicate relied on drake blood—and the extraordinary powers it confers to those known as the Blood-blessed—to fuel and protect its empire. But when the drake blood lines began to fail, a perilous expedition was mounted to secure them.

Claydon Torcreek survived the fraught mission through uncharted lands in pursuit of a myth that might have secured his people’s future. Instead he found a nightmare. The legendary White Drake was awoken from a millennia-long slumber, with a thirst to reduce the world of men to ashes, and the power to compel an army of Spoiled slaves to do it.

Spurred on by a vision he desperately hopes he can trust, Clay and rebel naval officer Corrick Hilemore hijack a warship and head towards the icy southern seas, searching for an ancient secret that may give them and their allies a fighting chance.

They are aided on another front by Blood-blessed agent Lizanne Lethridge. The spy and assassin will use her diplomatic status to infiltrate deep into enemy territory on a quest for a device to save them all.

As the world burns around them, and the fires of revolution are ignited, these few Blood-blessed are the last hope for all of civilisation.
Read More
Praise for The Waking Fire

“The Waking Fire is a marvellous piece of imagination with plenty of twists, a refreshingly different setting and excellent world-building. A great read.”—Mark Lawrence, author of Red Sister

“A bright and magical world for you to explore along with the wonderfully woven prose as a guide through what is sure to be another fantasy classic.”—The Huffington Post (UK)

“A fascinating world run mostly by corporations, where much of the power comes from dragon blood, provides a compelling backdrop for this sprawling epic fantasy...Breakneck pacing and sheer wonder keep the story compelling.”—Locus

“Ryan, author of the bestselling Raven’s Shadow trilogy, is back with the first novel in a new trilogy that delivers on action, adventure, espionage—and dragons…This book will leave readers eagerly awaiting the sequel.”—Booklist (starred review)
Read More