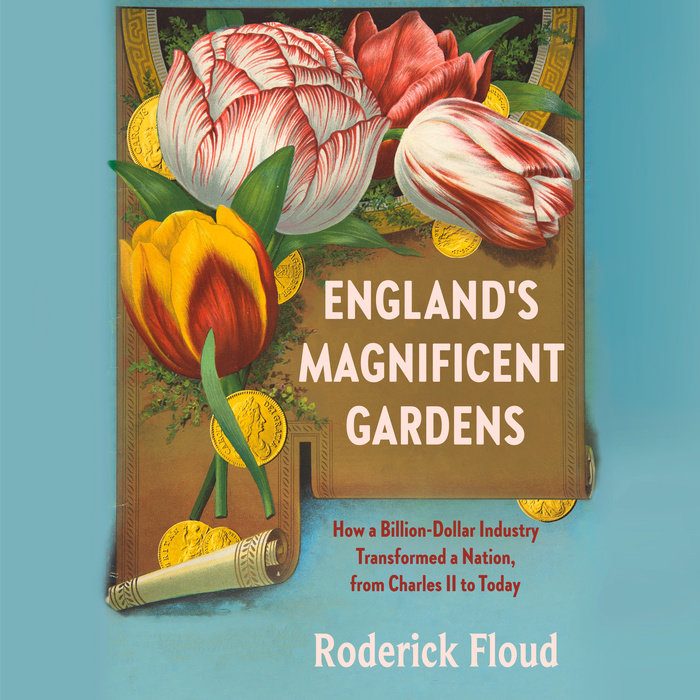 Written by: Roderick Floud
Read by: Gildart Jackson
16 Hours and 21 Minutes Imprint: Random House Audio Genre: Gardening - Regional - General Release Date: June 15, 2021
An altogether different kind of book on English gardens—the first of its kind—a look at the history of England’s magnificent gardens as a history of Britain itself, from the seventeenth-century gardens of Charles II to those of Prince Charles today.

In this rich, revelatory history, Sir Roderick Floud, one of Britain’s preeminent economic historians, writes that gardens have been created in Britain since Roman times but that their true growth began in the seventeenth century; by the eighteenth century, nurseries in London took up 100 acres, with ten million plants (!) that were worth more than all of the nurseries in France combined.

Floud’s book takes us through more than three centuries of English history as he writes of the kings, queens, and princes whose garden obsessions changed the landscape of England itself, from Stuart, Georgian, and Victorian England to today’s Windsors.

Here are William and Mary, who brought Dutch gardens and bulbs to Britain; William, who twice had his entire garden lowered in order to see the river from his apartments; and his successor, Queen Anne, who, like many others since, vowed to spend little on her gardens and instead spent millions. Floud also writes of Frederick, Prince of Wales, the founder of Kew Gardens, who spent more than $40,000 on a single twenty-five-foot tulip tree for Carlton House; Queen Victoria, who built the largest, most advanced and most efficient kitchen garden in Britain; and Prince Charles, who created and designed the gardens of Highgrove, inspired by his boyhood memories of his grandmother’s gardens.

We see Sarah, Duchess of Marlborough, who created a magnificent garden at Blenheim Palace, only to tear it apart and build a greater one; Deborah, Duchess of Devonshire, the savior of Chatsworth’s 100-acre garden in the midst of its 35,000 acres; and the gardens of lesser mortals, among them Gertrude Jekyll and Vita Sackville-West, both notable garden designers and writers.

We see the designers of royal estates—among them, Henry Wise, William Kent, Humphrey Repton, and the greatest of all English gardeners, “Capability” Brown, who created the 150-acre lake of Blenheim Palace, earned millions annually, and designed more than 170 parks, many still in existence today. We learn how gardening became a major catalyst for innovation (central heating came from experiments to heat greenhouses with hot-water pipes); how the new iron industry of industrializing Britain supplied a myriad of tools (mowers, pumps, and the boilers that heated the greenhouses); and, finally, Floud explores how gardening became an enormous industry as well as an art form in Britain, and by the nineteenth century was unrivaled anywhere in the world.
Read More
“One of the most important books on garden history in the last half century; for anyone serious about the subject, Floud’s book is a must-buy.”
—Historic Gardens

“A new kind of garden history . . . Filled with fascinating and often surprising details.”
—The Guardian

“Floud takes us shilling by shilling through pretty much the whole history of gardening in England, offering some fine anecdotes along the way.”
—The Literary Review

“A very different kind of gardening book. It’s not about design or horticultural techniques but is a history—the first of its kind, the author claims—of the economics of gardening, financial excess and all, from Charles II to today . . . Extraordinarily interesting [and] full of fascinating detail about everything from working-class gardens, kitchen gardens and nurseries to the astonishing cost of some rare plants and their shrinking value over time.”
—The Sunday Times (London)

“From the deep pockets of the eighteenth-century aristocrat to those of the twenty-first-century hedge-fund manager, huge amounts of money have been spent on gardens’ design and upkeep.”
—The Sunday Times (London; Book of the Year selection)

“Terrifically interesting, a real eye-opener . . . Even gardeners who don’t count the cost will be fascinated.”
—Evening Standard (Book of the Year selection)
Read More